After Thanksgiving, waistlines aren't the only things that are bloated—the Pentagon's top ranks are fattening at an alarming rate.

Despite a plan set forth by former Secretary of Defense Robert Gates to rein in the Department of Defense's (DoD) increasingly top-heavy force and assurances from Pentagon personnel that these plans were being enacted, the U.S. military is still adding top brass faster than you can say tryptophan.

In September, I testified before the Senate Armed Services Subcommittee on Personnel about the military becoming increasingly top-heavy as a result of growth in the proportion of general and flag officers at the Pentagon. This trend, which we at POGO dubbed Star Creep, is costly to taxpayers who have to foot the large bill for every new general and admiral. It also hinders military effectiveness by leading to what Gates referred to as a “bureaucracy which has the fine motor skills of a dinosaur.”

My fellow witnesses at the hearing—several generals and admirals as well as former Under Secretary of Defense for Personnel and Readiness Clifford Stanley—assured the concerned Committee that they had everything under control. They cited Gates’ Efficiency Initiatives, which purportedly eliminate 102 general and flag officer positions, as evidence of the DoD’s commitment to combating Star Creep. Stanley confirmed to Chairman Jim Webb (D-VA) that Gates’ successor—Secretary of Defense Leon Panetta—supported these efforts and, “has accepted the policies and the things put in place by his predecessor.” (Stanley tendered his notice of resignation in late October.)

What Senator Webb and I did not know at the time—and perhaps Stanley did—was that Gates’ initiative to cut general and flag officers had already come to a screeching halt. Data that were released recently on the DoD personnel office's website tell the tale.

When POGO began its analysis of Star Creep, the most recent data available to the public were from April 2011. Thus, when I presented Chairman Webb our recommendation that Secretary Panetta work to fully enact Gates’ Efficiency Initiatives to combat Star Creep and heard the other witnesses declare their support for the initiatives, I had no way of knowing that the DoD had already completely reversed course on Gates’ efforts.

Seventeen general and flag officers were scheduled to be eliminated between May and September through Gates’ Efficiency Initiatives. But the DoD didn’t reduce its top brass at all. Instead, six generals were added from May to September, increasing the number of general and flag officers from 964 to 970. Moreover, from July 1, 2011—Panetta’s first day as Secretary of Defense—to September 30, the Pentagon added three four-star officers. Coincidentally, this is precisely the number of four-star officers Gates cut during his final year as SecDef, from June 2010 to the end of June 2011. Thus, in just three months, Panetta undid a year’s worth of Gates’ attempts to cut the Pentagon’s very top brass. It’s doubtful that Gates would consider Panetta’s current rate of adding a new four-star officer every month conducive to efficiency.

One of these new four-star officers is Admiral Mark Ferguson, who became vice chief of naval operations and consequently a four-star admiral less than a month before he testified at Senator Webb’s hearing. Ironically, this beneficiary of Star Creep wrote in his prepared statement that the “Navy supports these efficiency actions and anticipates additional review to reduce or merge flag officer positions.” At the hearing he expanded upon this, stating that “We [the Navy] remain absolutely committed to create a more agile, flexible, and effective flag officer staff structure.” Apparently, this support and commitment to flag officer efficiencies includes adding admirals.

Comparing bloat across branches and over time

The most top-heavy branch of the military, the Air Force, led the most recent surge in increasing top brass, adding six officers in the two-, three-, and four-star ranks, while cutting one brigadier general. The Marines and Army each netted two additional generals. The Navy was the only branch of the military that actually did cut its top ranks during this time period, even though they added a four-star admiral.

While the Pentagon was adding these officers it was cutting enlisted personnel (a phenomenon known as “officer inflation” or “brass creep”). Between May and September, more than 10,000 enlisted personnel were cut by the DoD, possibly in preparation for the end of military operations in Iraq, while more than 2,500 officers were added. Consequently, for the first time in the more than 200 years that the U.S. has had a standing military, there are fewer than five enlisted personnel for every officer. In other words, today’s military is the most top-heavy force in U.S. history. 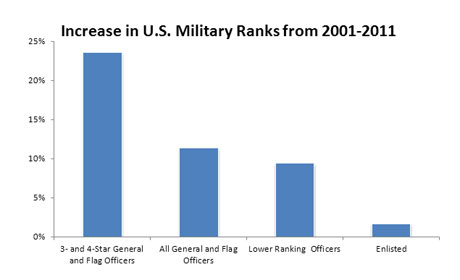 The Costs of Star Creep

The total cost to taxpayers of Star Creep is not trivial, even in the Pentagon’s bloated budget. Since the war in Afghanistan began, the Pentagon has added 99 general and flag officers, a rate of growth that’s tops among all DoD uniformed personnel groups, as can be seen in the above graph. In 2012, these general and flag officers will cost taxpayers more than $22 million in just direct financial compensation. Between 2012 and 2021, they’ll cost nearly $250 million.

But the cost of Star Creep only begins with direct compensation. Other costs that surround generals and admirals—such as staff, contractors, and travel—increase with higher ranks. For example, Bloomberg recently reported that taxpayers in Huntsville, Alabama, footed a $3.8-million bill to build luxurious homes for generals in a successful effort to keep Pentagon pork flowing into the area. One such home, built for a major general, was a sprawling 4,200-square-foot mansion that included granite countertops, hardwood floors, and stainless steel appliances.

Luxurious homes are just the beginning of the extravagances available to top military commanders. According to Raymond Dubois, former DoD director of administration and management from 2002 to 2005, there are other perks:

In his August 2010 speech on Efficiency Initiatives, Gates referred to these perks as “the overhead and accoutrements that go with” senior positions, be they military or civilian, within DoD. In an interview with Newsweek, Gates bemoaned these accoutrements and entourages that surround generals and admirals, which he believes are indicative of a military leadership that is “suffering from an inflated sense of entitlement and a distorted sense of priorities.”

Putting Star Creep on the table

The enlisted ranks have been shrinking, and even deeper cuts following the drawdown in Iraq have already been announced. So, with fewer personnel to command and a major conflict ending, why should the top ranks grow?

To find the budget savings they need to fulfill Panetta’s pledge to cut $250 billion from the Pentagon’s budget over the next five years, many military leaders should start by looking no further than the mirror.

Compensation calculations in this post were derived from the DoD’s “Regular Military Compensation Calculator.” The calculations assume the general or admiral has a family of four, has served for 30 years, lives in the DC metro area, pays a five percent state income tax, has no spousal income, and takes a standard tax deduction. Ten-year calculations assume an annual increase in pay equivalent to the Congressional Budget Office’s estimates of the consumer price index.