© 2022 Truthout
To Get Back on Track, Grow That Economy

Advanced countries’ economies still have plenty of room to grow, yet some economists have been arguing lately that global growth is hitting supply-side limits, and that not much can be done through policy to fix it.

The argument has arisen because high unemployment and low inflation prevail in advanced economies, while the rest of the world is facing accelerating inflation, together with rising commodity prices.

John Kemp, an economist for Reuters, wrote in a January column: “Monetary authorities in the United States, Britain and, to some extent, the euro zone are focused on the need to close national output gaps. But at a global level it is not clear an output gap exists. Rapidly rising food and energy prices suggest the economy is already hitting the speed limit of non-inflationary growth.” Mr. Kemp goes on to explain that some commentators, including myself, believe that a lack of sufficient demand is what is driving the global economy’s problems, and that a combination of policies that encourage government spending and monetary expansion would be a good solution. However, Mr. Kemp wrote, “the problem is not aggregate demand but its distribution.”

That assertion is questionable because, in fact, both problems apply. 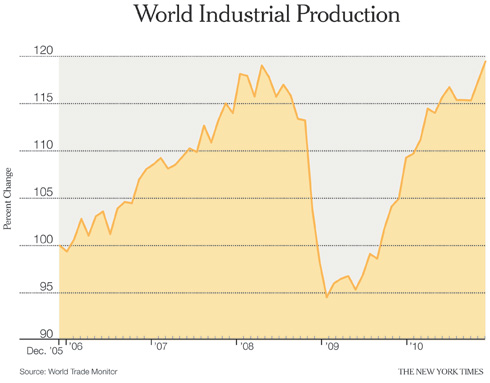 Let’s look at world industrial production data, compiled for World Trade Monitor by the CPB Netherlands Bureau for Economic Policy Analysis, in the graphic on this page. I’ve indexed everything so that December 2005 is equal to 100, to make it easier to see the five-year trend. It shows that overall production has recovered the ground that the world economy lost during the recession in 2008, but it is still only slightly higher than the previous peak, which puts production well below any reasonable pre-crisis expectations about future trends. 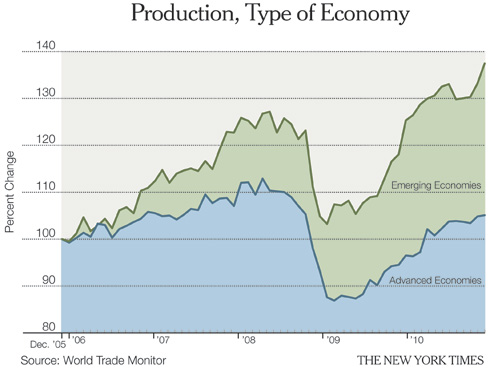 But when the data is separated between emerging and advanced economies, shown here on the second graphic, a sharp divergence is revealed. Production in emerging economies is well above the previous peak, and has arguably more or less matched those levels predicted before the crisis. Advanced economies, however, are still producing at levels well below pre-crisis output, let alone the pre-crisis trend. It is no wonder, then, that emerging economies are experiencing inflation.

What this means is that if global aggregate demand (or the total demand for goods and services in an economy at a certain price level) were redistributed so that more of it fell to countries with advanced economies, they could expand further without putting pressure on other nations to produce more goods. And there’s a simple way to get such a redistribution of demand: an appreciation of emerging-market currencies against advanced-country currencies. The fact that nations with emerging economies, like China, aren’t willing to let this happen is leading to an increase in prices.

Mr. Kemp more or less acknowledges this, but seems to believe that an exchange-rate adjustment would somehow impoverish advanced countries: “Until firms significantly raise productivity … the painful remedy is likely to involve increased competitiveness and reduced living standards,” he writes. But that’s way over the top — imports from emerging markets are still less than 10 percent of developed countries’ G.D.P., so even a large depreciation of the latter group’s currencies would have only a modest effect on real incomes in those nations.