As we enter another election cycle, our most urgent challenge will be to ensure that the right to vote and the right to have that vote counted is protected. It comes as no surprise that this “basic right, without which all others are meaningless” has come under massive attack as we prepare to re-elect the first Black POTUS, who was swept into office by voters of color, youth and women.

Voter suppression efforts take a variety of forms. Certainly there are the blatant efforts to legislatively restrict access to the franchise via legal barriers such as recent changes that require voter identification and documentation of citizenship, limit early and absentee voting, make voter registration more difficult and further restrict the voting rights of former felons. These tactics are favored by the right, and disproportionately impact communities of color particularly African Americans, Latino/as and American Indians. Recent research of felony disenfranchisement alone, for example, indicates thatfelony disenfranchisement and the over-representation by race has already and will continue to impact the outcome of both national and state-level elections. In all cases, Republicans benefit.

Voter suppression occurs in less direct ways as well, and again these tactics are primarily those of the right, but are occasionally stoked by the disaffected left. Examples here include relentlessly negative campaigning which reduces voter turn-out, thinly coded appeals to racial fears, and calls to sit out elections, or vote third party in protest.

This is what we are up against in 2012. And up against it in an election cycle that will be — courtesy of the SCOTUS and Citizens United v Federal Election Commission (2010) – awash in unlimited, unprecedented gushers of corporate money.

As the year progresses, CI will continue to detail these disenfranchisement efforts and offer action options towards resistance and successful GOTV. For now, here is a brief over-view of the current landscape.

Since the 2010 midterms, a wave of voter suppression laws (furthered by ALEC and funded by Koch brothers $$$) were passed by newly elected Republicans.

While the full scope and impact of these new laws has yet to be seen, the Brennan Center for Justice recently offered the first comprehensive analysis to date:

These new restrictions fall most heavily on young, minority, and low-income voters, as well as on voters with disabilities. This wave of changes may sharply tilt the political terrain for the 2012 election. Based on the Brennan Center’s analysis of the 19 laws and two executive actions that passed in 14 states, it is clear that:

~ These new laws could make it significantly harder for more than five million eligible voters to cast ballots in 2012.

~ The states that have already cut back on voting rights will provide 171 electoral votes in 2012 – 63 percent of the 270 needed to win the presidency.

~ Of the 12 likely battleground states, as assessed by an August Los Angeles Times analysis of Gallup polling, five have already cut back on voting rights (and may pass additional restrictive legislation), and two more are currently considering new restrictions.

States have changed their laws so rapidly that no single analysis has assessed the overall impact of such moves. Although it is too early to quantify how the changes will impact voter turnout, they will be a hindrance to many voters at a time when the United States continues to turn out less than two thirds of its eligible citizens in presidential elections and less than half in midterm elections. 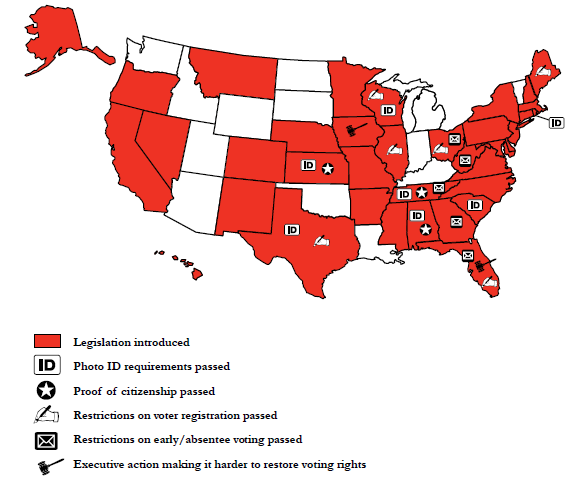 The status of these laws is continually evolving. Just last week, The Justice Department rejected South Carolina’s voter identification law as in violation of the Voting Rights Act. This may signal further action on the part of the DOJ. Stay tuned.

For nearly 50 years now, the Republican Party has relied on appeals to the racial fears of whites. Lee Atwater, adviser to Nixon, Reagan and George H.W. Bush and the architect of the so-called “southern strategy”, explained in a 1981 interview:

”You start out in 1954 by saying, ‘N#$%*r, n#$%*r, n#$%*r.’ By 1968 you can’t say ‘n#$%*r’ — that hurts you. Backfires. So you say stuff like forced busing, states’ rights and all that stuff. You’re getting so abstract now [that] you’re talking about cutting taxes, and all these things you’re talking about are totally economic things and a byproduct of them is [that] blacks get hurt worse than whites.

”And subconsciously maybe that is part of it. I’m not saying that. But I’m saying that if it is getting that abstract, and that coded, that we are doing away with the racial problem one way or the other. You follow me — because obviously sitting around saying, ‘We want to cut this,’ is much more abstract than even the busing thing, and a hell of a lot more abstract than ‘N#$%*r, n#$%*r.”’

Often this tactic is most successful when tied to “law and order” themes and thecriminalizing archetypes that portray black women as chiseling “welfare queens”, youth of color as “super-predators” and black males as “rapists and thugs”.

Two more: Herman Cain, whose manufactured minstrel show run amok served both as attempted GOP inoculation against racism and re-enforcer of the theme of Black Man as Sexual Predator.

Of course, the appeals to racial hysteria are only magnified when the target is the first Black POTUS. And all right wing the madness of the past four years and the madness yet to come is about race — from You lie!” to birthers to a tea-party gone woefully wrong, to this recent Fox news question – ” How long do you think Sean Hannity’s show would last if four times in one sentence, he made a comment about, say, the President of the United States, and said that he looked like a skinny, ghetto crackhead? Which, by the way, you might want to say that Barack Obama does.”

It has been from the start:

This noise is about race. It is about “othering” a President who is seen as a symbol of white dispossession: dispossession of white hegemony, white entitlement, white expectation, and white power, unquestioned and unchallenged from the darker skinned other. This is what animates the every move of the angry masses, individual exceptions notwithstanding. Unless the left begins pushing back, and insisting that yes, the old days are gone, white hegemony is dead, and deserved its demise, and that we will all be better off for it, the chorus of white backlash will only grow louder. So too will it grow more effective at dividing and conquering the working people who would benefit–all of them–from a new direction.

And the left has not pushed back hard enough. While racist appeals are the forte of the right wing, the left, in more subtle color-blind fashion – has exhibited racist tendencies of its own. As Melissa Harris-Perry puts it, “… liberal electoral racism is the willingness to abandon a black candidate when he is just as competent as his white predecessors”. The obsession on the person of Obama as the sole arbiter of all legislative outcomes even with a GOP controlled Congress, the impatience – Obama as the “one black friend that we didn’t even think of as black” who just couldn’t fix 40 plus years of conservative mess in 15 minutes, the blithe fixation on class coupled with the abject refusal to discuss the impact of race/racism on the current socio-political climate, and the most recent calls for primary or third party options, all, in the end, work to dampen voter enthusiasm and suppress turn-out.

All these efforts – right and left- will escalate. Be prepared to recognize and challenge them.

In the coming weeks and months, CI will continue to offer information and resources to counter voter suppression attempts.

For now, here are some preliminary actions you can take:

~ Inform yourself and others on your states’ voting requirements. Vote411 is an excellent starting place.

~ Join Organizing for America. The re-election of Barack Obama and the return of Congress to Democratic control is imperative. No, Urgent.

~ Commit to bringing at least one first-time voter to the polls with you. Start Now.