Our World Is Fragmented by Inequality. Why Is There Poverty Amid Plenty?

The federal budget deficit has been plummeting in size over the last few years; however, judging from polls, most Americans do not know that – indeed, their concern over the deficit has grown even as the annual deficit has shrunk significantly. And it continues to do so: the Congressional Budget Office (CBO) estimated yesterday that the deficit for the first eleven months of this fiscal year fell $400 billion from the comparable period last year. 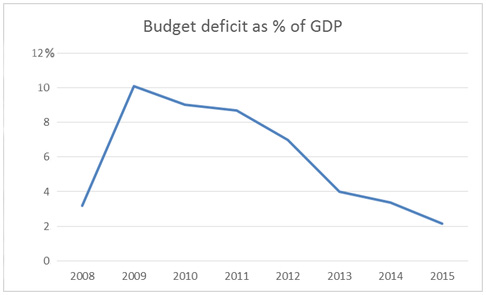 The 35 percent decrease was driven by a combination of decreases in government spending and increases in revenues. Federal outlays fell by $127 billion, and tax receipts increased by $284 billion. This is part of a longer trend. As highlighted by Nobel Prize-winning economist Paul Krugman in August, the budget deficit (as a percent of GDP and in absolute terms) has been falling since it peaked in 2009.

But you would not know that from reading the polls alone. 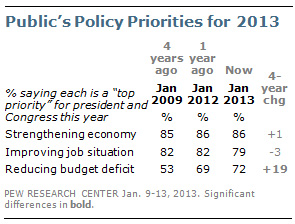 A YouGov.com poll also found that far more people erroneously believed the deficit was larger in 2012 compared to 2011.

There are several theories as to why Americans are increasingly focused on the deficit even as it is shrinking. One theory has it that – perhaps partly due to a lavishly corporate-funded public relations campaign that directs the public’s attention towards the deficit and debts rather than a pro-job growth fiscal policy – Americans’ concerns about the deficit are really more about their feelings on the economy’s direction.

As Jamelle Bouie at The American Prospect put it: “Voters associate high deficits with poor economic performance—the public might say that it wants more action to lower the deficit, but what it means is that it wants Washington to improve the economy.”

There is a link between deficits and economic growth. Strong economic growth coupled with balanced tax policies that put an appropriate burden on those most able to pay – the wealthy and corporations who benefit from public services and goods, including infrastructure – tend to lead to smaller deficits and even government surpluses, as the U.S. briefly saw at the end of the Clinton presidency. In other words, causality tends to run in the direction of economic strength leading to smaller deficits, rather than small deficits leading to economic growth.

Whatever the reasons behind the disconnect between Americans’ views and the actual size of the deficit, in the U.S., deficits are getting smaller for now and in the near future.

Jessica Schieder is a Policy Associate for Fiscal Policy at the Center for Effective Government. She specializes in research and advocacy pertaining to Medicare, Medicaid, and Social Security, as well as other entitlement programs.