Since the Occupy movement began more than a year ago, the Bay Area has seen marches numbering in the thousands or more against economic inequality and police brutality. The size and broad support for these actions has hampered the ability of the police and San Francisco City Hall to counter these protests as effectively as they may have liked.

The SFPD finally found an opportunity to strike back, as it were, on October 6 when more than 100 people with the West Coast Anti-Colonial, Anti-Capitalist convergence marched through the Financial District to protest Columbus Day. From the video it appears that somebody – probably one person – was throwing paint balls, one of which hit the police. Rather than determining who that person was, the police suddenly and without warning rushed the entire march, indiscriminately shoving people, throwing them to the ground, punching and kicking them repeatedly.

This seemed to have less to do with enforcement of laws against vandalism, than seizing an opportunity for revenge.

The police could hardly hide their glee when sending out an absurd press release the next day claiming the group “identified themselves as members of the criminal street gang, Black Blok,” when no such thing even exists and none of the protesters have identified themselves as such. Looking at the video, it’s clear that many of them weren’t even wearing masks.

Nonetheless, the SFPD could depend on one of their most reliable tools to try these individuals in the public arena. The San Francisco Chronicle published an article titled “SF cops: Vandals tactics seen before” with the entire set of mug shots and names of each of the 20 people arrested, repeating the police claim that they “were likely involved in similar protests that busted up the Mission District.” This was in reference to a few acts of vandalism that took place in the neighborhood in May and September which shop owners loudly criticized the police for not stopping. 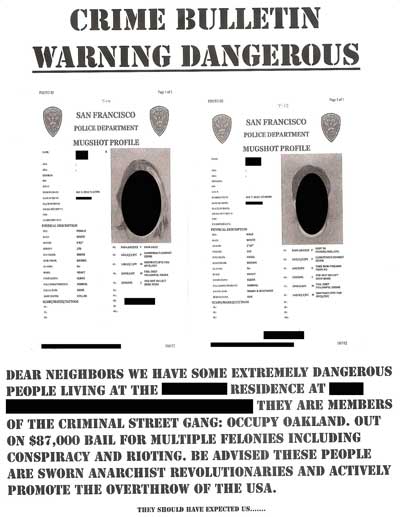 Days after the mug shots were released, some of the photos were placed on posters and plastered on telephone poles and left on porches in the arrestees’ neighborhood. The posters claim they are “dangerous members of a street gang … sworn anarchist revolutionaries determined to overthrow the USA … charged with multiple felonies.”

These protesters have been tried in the public arena and left open to vigilante justice and a lifetime of being associated with crimes for which they have yet to be convicted, with a permanent Internet trail for any future employer to consider. Far from critical journalism, this is state propaganda at its finest.

A few days later, an action by Homes Not Jails on World Homeless Day saw a similar police response when 19 protesters occupied an abandoned building on Castro Street. They were initially charged with felony burglary and also had their mug shots posted by the ever-dutiful Chronicle, even though they were later released and it appears the charges may not be pursued.

Nonetheless, 19 of the 20 Anti-Colonial protesters are still being charged with multiple misdemeanors and have a trial set for November, with a jury pool expected to be influenced by the Chronicle’s coverage. Suffice it to say, it was not a good week for honest journalism in San Francisco.

Not that it would be difficult to find flaws in the SFPD. In August, it was discovered that the department has been misreporting arrest rates for different ethnic groups since 1999. During this time, all arrested Latinos were reported as “white” and Asian-Americans as “Chinese.” Thus, not a single Latino arrest was reported by SFPD in 13 years and nobody noticed. Not even the Chronicle.

It was also recently revealed that the chief of police had to take the extraordinary step to remind his officers that “Tenants of hotels, including single room occupancy hotels, possess the same constitutional rights and protections related to law enforcement entry into their hotel room [as homeowners].” This memo was written after an officer illegally entered the residential hotel room of a mentally ill man over a noise complaint, ending in the resident being shot and killed by the officer.

That this same department might not be a trustworthy source of information might have been considered by the Chronicle before repeating verbatim the accusations against the protesters and posting their mug shots. However, neither of these stories was even broken by San Francisco’s leading newspaper, but instead by Shoshana Walter in the Bay Citizen, a non-profit web site of original Bay Area journalism.

An even greater example of hypocrisy in the San Francisco criminal justice system is the reinstatement last week of Sheriff Ross Mirkarimi as the administrator of the jail that held the Anti-Colonial protesters. Mirkarimi has been fighting for his job since March when he was suspended without pay by Mayor Ed Lee in connection with an assault on his wife, Eliana Lopez. A widely seen video taken by their neighbor shows Lopez crying as she displays a bruise on her arm she said was given to her by Mirkarimi, who eventually pleaded guilty to the charge of false imprisonment.

Mirkarimi, a former Green Party activist, seemed to be on his way out before the progressive minority on the Board of Supervisors voted to allow him to keep his job. The meeting was filled with Mirkarimi’s supporters who erupted in loud cheers when it was announced that a man accused of assaulting his wife would be allowed to run the jails again. What any of this has to do with progressive politics has yet to be explained to the public. Anyone who wonders why someone might join an “Anti-Colonial, Anti-Capitalist” march should look no further than the Mirkarimi debacle.

The beneficiary of this mess is the pro-business Democratic party machine that actually runs San Francisco, led by former mayors Gavin Newsom and Willie Brown. The Chronicle currently employs Brown to write a weekly, rambling column with 45-word movie reviews and name-dropping anecdotes. Yet, an article in the paper quoted the former head of Common Cause as saying “Brown has effectively been running this town” since 1980. Whether it is appropriate for the city’s largest newspaper to have such a cozy relationship with the decades-long leader of the local political machine is left unconsidered and, amazingly, Brown “didn’t return calls for comment.”

This is the political machine in San Francisco, littered with ego maniacs, wife abusers and careerists. Little is done to solve real problems like gentrification, which is encouraged by Mayor Lee giving tax breaks to help Twitter relocate from their office space in the Chronicle building to mid-Market Street in hopes of revitalization, while working families flee for the East Bay.

The warring progressive and moderate machines gripe and grandstand endlessly while the Chronicle points a finger at the toxic atmosphere in City Hall. But there is one thing on which they can all agree – the Anti-Colonial protesters deserve the full force of the law. And if that is not enough, then extra-legal measures will be encouraged as well.

Either way, the city’s paper of record is always happy to help put them all back into Sheriff Mirkarimi’s jail.

Share
Copyright, Truthout. May not be reprinted without permission.
Scott Johnson

Scott Johnson is an Oakland-based writer and activist who has been involved in the Justice 4 Alan Blueford campaign and Occupy Oakland. He can be reached at [email protected].