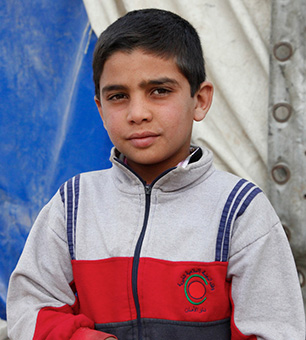 (Photo: UK Department for International Development / Flickr)Beirut – As refugees from Syria continue to pour into Lebanon, the majority of children are not going to school, spurring concern that they will become a ‘lost generation’.

Awad, 12, and her little sister Eman, 10, are among the vulnerable new arrivals. Having fled Damascus after their father was killed, they settled with their mother in a squalid room in overcrowded Shatila refugee camp.

“We only eat one meal a day that our mother cooks, in the evening.”

“We were meant to move in with our grandfather, but he died when we got here,” explained Awad. “We felt very far away from home and afraid.”

Their mother remarried, but her Lebanese husband soon abandoned her, leaving her pregnant and penniless. “We now have a problem paying the owner rent – we have no money,” said Awad.

The two sisters stay home all day, leaving only three times a week to visit a local NGO for activities like drawing and a rare opportunity to mix with kids their own age.

Mostly they rely on their colouring books to keep themselves entertained. They lack schoolbooks, television and a social life to occupy their time.

And the girls are hungry. “We only eat one meal a day that our mother cooks, in the evening,” admits Awad. “Today we will eat the leftovers from yesterday.”

Zuhair Akkawi, a social worker at the Beit Atfal al-Summoud community centre, which runs activities for Palestinian and Syrian children in Shatila, says they are overwhelmed.

“There is a very big problem – there are so many refugees from Syria,” she said. “Maybe during Ramadan we can help with food. Some charities send us meals to give. But otherwise, we are overstretched.”

Out of the more than 1.1 million Syrian child refugees worldwide, 385,000 are registered in Lebanon with the United Nations High Commissioner for Refugees (UNHCR).

In an alarming report, ‘The future of Syria: Refugee children in crisis’, the agency says that 80 percent of the 270,000 school age Syrians in Lebanon are not getting an education.

“The low enrolment rate is linked to a range of factors including school capacity, cost, transportation and distance, curriculum and language, bullying and violence, and competing priorities such as the need for children to work.”

Lebanese law states that education is free and compulsory until age 12. Recent legislation has upped the mandatory age for education to 15 years, but it has not been implemented.

UNHCR says the refugee influx has had an enormous impact on Lebanese schools. “In some schools,” the report said, “the entire dynamic in the classroom has changed. Not all teachers have been trained to work with refugee children suffering from psychological distress. Coupled with a lack of adequate resources, some Syrian students complained that the quality of education they receive in public schools is poor.”

Syrian psychologist Khalil Yosef counsels Syrian children in Lebanon’s northern city Tripoli. He says that among the obstacles preventing Syrians from staying in school are expenses, the need for children to work instead, and the Lebanese curriculum, half in French or English. Syrians, with their Arabic-only education, can’t keep up and often drop behind, or drop out.

Then there is bullying. “Syrian children were being harassed by Lebanese students,” Yosef said “They told me they didn’t want to go to the same school.”

Now the area’s overcrowded Lebanese schools have produced a separate afternoon shift for Syrians after Lebanese students finish at lunch, where they learn from a translated Arabic curriculum.

Yosef says the children are often traumatised by violence in Syria, and have difficulty adjusting to the challenges of insecure lives in Lebanon.

“They are aggressive towards other students and the teachers themselves,” he said. “They don’t listen, skip classes, and when it comes to attending school in the afternoon, it’s hard because the whole day’s routine has to change. They return home from school at night.

“What is positive about this is they have a routine. That’s good for limiting their hyperactivity, and engaging them.”

Fatima, 11, is a Palestinian who fled from Homs with her family. Her father, a house painter, cannot find work in Beirut and all their relatives stayed behind in Syria. “I felt very lonely when I got here because I had no friends. It took time,” she said.

She now attends a school for Palestinians run by the United Nations Relief and Works Agency (UNRWA), and stumbles over the English-Arabic curriculum. She relies heavily on her mother and neighbours to tutor her after school.

“My father says he needs his children to be in school. It’s important to be there, and not in the streets.”