Forget Bernie Madoff and Enron’s Ken Lay—they were mere amateurs in financial crime. The current Libor interest rate scandal, involving hundreds of trillions in international derivatives trade, shows how the really big boys play. And these guys will most likely not do the time because their kind rewrites the law before committing the crime.

Modern international bankers form a class of thieves the likes of which the world has never before seen. Or, indeed, imagined. The scandal over Libor—short for London interbank offered rate—has resulted in a huge fine for Barclays Bank and threatens to ensnare some of the world’s top financers. It reveals that behind the world’s financial edifice lies a reeking cesspool of unprecedented corruption. The modern-day robber barons pillage with a destructive abandon totally unfettered by law or conscience and on a scale that is almost impossible to comprehend. 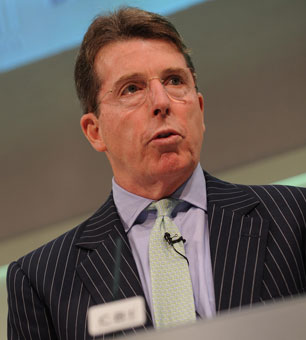 Robert E. Diamond. (Photo: The CBI / Flickr)How to explain a $450 million settlement for one bank whose defense, in a plea bargain worked out with regulators in London and Washington, is that every institution in their elite financial circle was doing it? Not just Barclays but JPMorgan Chase, Citigroup and others are now being investigated on suspicion of manipulating the Libor rate, so critical to a $700 trillion derivatives market.

Caught as the proverbial deer in the headlights, Barclays Chairman Robert E. Diamond Jr. resigned this week and offered a plaintive defense to the British Parliament that he learned only recently that his bank was manipulating the index on which so large a part of international trade is based. That is plausible only if we assume he was paid $10 million a year to be deliberately ignorant. The Wall Street Journal had exposed this scandal fully four years ago but his bank continued to participate in it nonetheless.

“Study Casts Doubt on Key Rate” was the headline on the May 29, 2008, investigative report, which concluded: “Major banks are contributing to the erratic behavior of a crucial global lending benchmark, a Wall Street Journal analysis shows.” Even then, according to the report, it was known that the Libor rate was being manipulated “to act as if the banking system was doing better than it was at critical junctures in the financial crisis.”

Fast-forward four years to Diamond’s testimony before Parliament this week in which the CEO claimed his recent discovery of a pattern of interest manipulation by Barclays had made him “physically sick.” Who was to blame? According to the executive, subordinates acting behind his back.

The American-born banker, who has dual citizenship in the United States and Britain, is well versed in financial chicanery, having started by putting together derivatives packages at Credit Suisse First Boston back in 1996. He was compelled under parliamentary questioning Wednesday to admit that “I can’t sit here and say no one in the industry [knew] about the problems with Libor. There was an issue out there and it should have been dealt with more broadly.”

He couldn’t deny widespread chicanery within his bank because, as in the collapse of Enron a decade ago, investigators had uncovered an email record of market manipulation so glaring that if the top executives were unaware, it was because they didn’t want to know.

As The New York Times editorialized: “The evidence, cited by the Justice Department—which Barclays agreed is ‘true and accurate’—is damning. ‘Always happy to help,’ one employee wrote in an email after being asked to submit false information. ‘If you know how to keep a secret, I’ll bring you in on it,’ wrote a Barclays trader to a trader at another bank, referring to their strategies for mutual gain. If that’s not conspiracy and price-fixing, what is?”

The U.S. Justice Department made a deal with Barclays, and although it may prosecute some individuals in the scam, it agreed not to go after the bank itself. “Such an agreement makes sense only if that cooperation will allow prosecutors to nail other banks that have been involved in setting the rates, including potential cases against Citigroup, JPMorgan Chase and HSBC … ,” the Times editorial said.

Both Citigroup and JPMorgan Chase were reported by The Wall Street Journal years ago to be suspected of rigging the Libor interest rate. The leaders of those banks, despite such media exposure, clearly remained confident enough to continue on their merry way.

The sad reality is that they will probably get away with it. The world of high finance is by design as obscure and opaque as the bankers and their political surrogates can make it, and even this most recent crack in their defense of deception will soon be made to go away.