For the third election cycle in a row, biotech corporations and large agribusinesses narrowly defeated statewide citizen initiatives that would have mandated the labeling of genetically engineered (GE) ingredients on food packages. This time the electoral showdowns took place in Oregon, where it was narrowly defeated, and Colorado where the loss was decisive after labeling backers chose to focus their resources on Oregon.

As in past campaigns in California (2012) and Washington (2013), the votes sparked a high-stakes bidding war pitting consumer and farmer advocates against multi-billion-dollar biotechnology interests and food industry giants.

Corporate opponents of labeling contributed unprecedented amounts of money in Oregon to narrowly push the No vote, ever so marginally, over the 50% mark.

The Cornucopia Institute has released an updated infographic that examines the final dollar totals spent on the state referendums. Big Food interests and their allies in the biotech industry opposing the consumer’s “right-to-know” outspent the Yes side $32 million to $12 million in Colorado and Oregon. Over the past three years, including the two previous, similar referendums in California and Washington, corporate interests have outspent the pro-labeling supporters $100 million to $29 million.

Despite the seemingly “sufficient” cash deluge, the result in Oregon required a recount as the final tally resulted in a squeaker of just 800 votes separating the two sides out of 1.5 million cast. Spending by both factions continued during the two-week recount with both sides lawyering-up to closely observe the review. The electoral result was ultimately upheld.

The Cornucopia Institute’s new, post-election detailed infographic reveals which food companies supported or opposed the food labeling initiatives. Many of the major manufacturers opposing passage own leading brands in the natural/organic marketplace — generally patronized by consumers that oppose genetic engineering. The use of GMOs in organic food is prohibited under federal law.

“Many loyal customers will likely be surprised to learn that owners and management of some of their favorite organic and natural brands are fighting against their right to know what is in their food,” Kastel added. “We are spotlighting these companies so that consumers can vote in the marketplace for manufacturers and brands that best reflect their personal values.”

Mandatory labeling of genetically engineered food ingredients (commonly called GMOs — standing for genetically modified organisms) at the state level is viewed as a watershed event by many industry observers, given the prolonged inaction at the federal level. In 2014 Vermont passed a law requiring GMO food ingredient labeling. The Grocery Manufacturers Association (GMA) and the International Dairy Foods Association (IDFA), a pair of industry trade-lobby groups representing the food industry and dairy marketers and manufacturers, respectively, are now suing Vermont over its legislatively authorized food labeling act. The states of Connecticut and Maine have adopted similar legislation that will take effect when other neighboring states pass such legislation.

At the national level, Monsanto, its biotech allies, and the GMA in particular, have been credited for bottlenecking action on federal legislation although industry interests are now rallying behind a new proposal that would outlaw state GMO food labeling laws while permitting “voluntary” labeling genetically modified ingredients (although voluntary labeling is already allowed by the FDA).

More than 60 countries around the world require the labeling of foods containing GMO ingredients. “Interestingly, in Europe where GMO labeling is required, consumers overwhelming choose to buy organic and non-GMO products,” said Kastel. “The industrial food lobby is fully cognizant of the European experience and what’s at stake — that’s why they’re fighting like hell against these grassroots efforts in states like Colorado and Oregon.”

Among those throwing their financial weight behind the consumer’s right to know in the Oregon and Colorado state referendums were Dr. Bronner’s, Organic Consumer’s Fund, Center for Food Safety, Food Democracy Action, Mercola.com, Nature’s Path and Presence Marketing.

“Despite spending tens of millions of dollars to keep us in the dark, Americans are waking up and demanding their right to know when our food has been genetically engineered by the pesticide industry to survive huge doses of the pesticides they sell,” observed David Bronner, the President of Dr. Bronner’s Magic Soaps. “I am confident that the tide is moving in our direction.”

“We doubt if loyal customers of Naked Juice (PepsiCo), Dagoba chocolate (Hershey’s) RW Knudsen or Santa Cruz juices (Smuckers) realize that their corporate parents are taking the profits from their patronage and stabbing them in the back by investing to defeat GMO labeling on food packages,” Cornucopia’s Kastel lamented.

“Consumers are increasingly interested in ‘voting with their forks,’ and many want to support companies that share their values,” added Jason Cole, a researcher for Cornucopia who compiled the data for the infographic. “We hope the information we are providing on corporate involvement in influencing legislation and the electoral process will help consumers make informed choices in grocery store aisles.”

Data for the campaign contributions was gathered from appropriate state regulatory agencies. 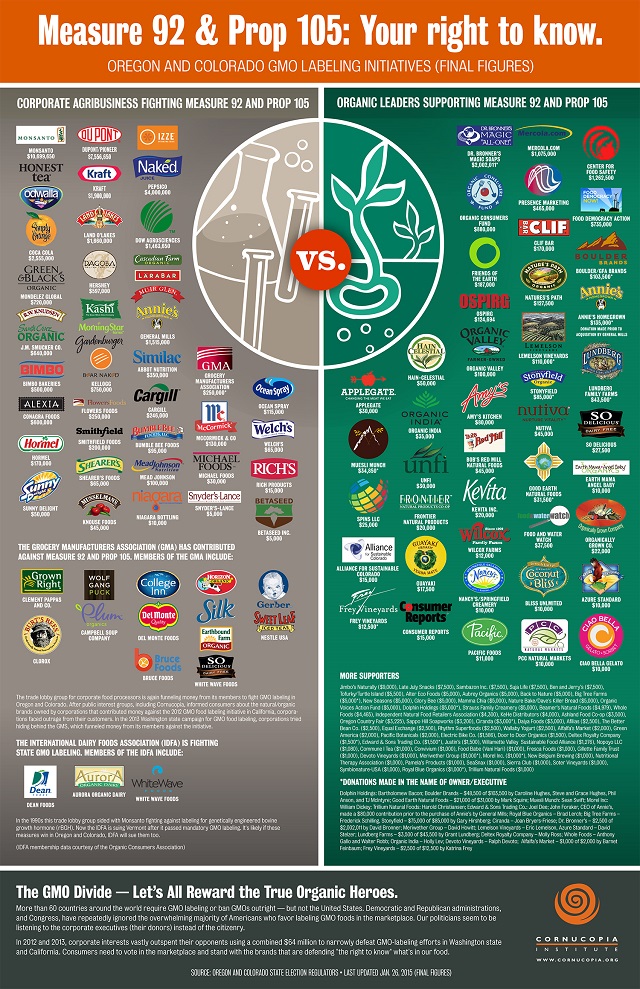 Donate Now
Share
This piece was reprinted by Truthout with permission or license. It may not be reproduced in any form without permission or license from the source.
Staff
Truthout
Share
The Cornucopia Institute has released an updated infographic that examines the final dollar totals spent on the state referendums.
Politics & Elections