On June 30, QE2 ended with a whimper. The Fed's second round of “quantitative easing” involved $600 billion created with a computer keystroke for the purchase of long-term government bonds. But the government never actually got the money, which went straight into the reserve accounts of banks, where it still sits today. Worse, it went into the reserve accounts of FOREIGN banks, on which the Federal Reserve is now paying 0.25 percent interest.

Before QE2 there was QE1, in which the Fed bought $1.25 trillion in mortgage-backed securities from the banks. This money, too, remains in bank reserve accounts collecting interest and dust. The Fed reports that the accumulated excess reserves of depository institutions now total nearly $1.6 trillion.

Interestingly, $1.6 trillion is also the size of the federal deficit – a deficit so large that some members of Congress are threatening to force a default on the national debt if it isn't corrected soon.

So, here we have the anomalous situation of a $1.6 trillion hole in the federal budget, and $1.6 trillion created by the Fed that is now sitting idle in bank reserve accounts. If the intent of “quantitative easing” was to stimulate the economy, it might have worked better if the money earmarked for the purchase of Treasuries had been delivered directly to the Treasury. That was actually how it was done before 1935, when the law was changed to require private bond dealers to be cut into the deal.

The one thing QE2 did for the taxpayers was to reduce the interest tab on the federal debt. The long-term bonds the Fed bought on the open market are now effectively interest free to the government, since the Fed rebates its profits to the Treasury after deducting its costs.

But QE2 has not helped the anemic local credit market, on which smaller businesses rely; and it is these businesses that are largely responsible for creating new jobs. In a June 30 article in The Wall Street Journal titled “Smaller Businesses Seeking Loans Still Come Up Empty,” Emily Maltby reported that business owners rank access to capital as the most important issue facing them today; and only 17 percent of smaller businesses said they were able to land needed bank financing.

How QE2 Wound Up in Foreign Banks

Before the Banking Act of 1935, the government was able to borrow directly from its own central bank. Other countries followed that policy as well, including Canada, Australia and New Zealand; and they prospered as a result. After 1935, however, if the US central bank wanted to buy government securities, it had to purchase them from private banks on the “open market.” Former Fed Chairman Marinner Eccles wrote in support of an act to remove that requirement, that it was intended to keep politicians from spending too much. But all the law succeeded in doing was to give the bond-dealer banks a cut as middlemen.

Worse, it caused the Fed to lose control of where the money went. Rather than buying more bonds from the Treasury, the banks that got the cash could just sit on it or use it for their own purposes; and that is apparently what is happening today.

In carrying out its QE2 purchases, the Fed had to follow standard operating procedure for “open market operations”: it took secret bids from the 20 “primary dealers” authorized to sell securities to the Fed and accepted the best offers. The problem was that 12 of these dealers – or over half – are US-based branches of foreign banks (including BNP Paribas, Barclays, Credit Suisse, Deutsche Bank, HSBC, UBS, and others); and they evidently won the bids.

The fact that foreign banks got the money was established in a June 12 post on Zero Hedge by Tyler Durden (a pseudonym), who compared two charts: the total cash holdings of foreign-related banks in the US, using weekly Federal Reserve data; and the total reserve balances held at Federal Reserve banks from the Fed's statement ending the week of June 1. The charts showed that after November 3, 2010, when QE2 operations began, total bank reserves increased by $610 billion. Foreign bank cash reserves increased in lock step, by $630 billion – or more than the entire QE2. 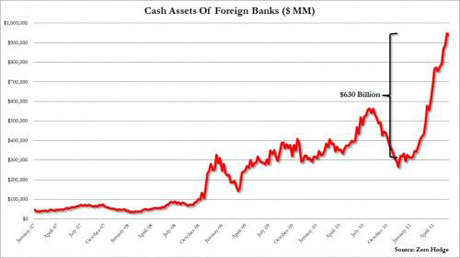 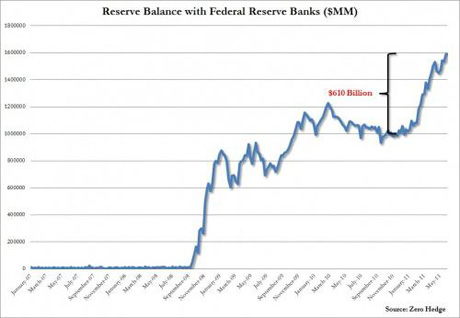 In a June 27 blog, John Mason, professor of finance at Penn State University and a former senior economist at the Federal Reserve, wrote:

In essence, it appears as if much of the monetary stimulus generated by the Federal Reserve System went into the Eurodollar market. This is all part of the “Carry Trade” as foreign branches of an American bank could borrow dollars from the “home” bank creating a Eurodollar deposit….

The real lending by commercial banks is not taking place in the United States. The lending is taking place off-shore, underwritten by the Federal Reserve System and this is doing little or nothing to help the American economy grow.

… [T]he only beneficiary of the reserves generated were US-based branches of foreign banks (which in turn turned around and funnelled the cash back to their domestic branches), a shocking finding which explains … why US banks have been unwilling and, far more importantly, unable to lend out these reserves ….

… [T]he data above proves beyond a reasonable doubt why there has been no excess lending by US banks to US borrowers: none of the cash ever even made it to US banks!… This also resolves the mystery of the broken money multiplier and why the velocity of money has imploded.

Well, not exactly. The fact that the QE2 money all wound up in foreign banks is a shocking finding, but it doesn't seem to be the reason banks aren't lending. There were already $1 trillion in excess reserves sitting idle in US reserve accounts, not counting the $600 billion from QE2.

According to Scott Fullwiler, associate professor of economics at Wartburg College, the money multiplier model is not just broken, but is obsolete. Banks do not lend based on what they have in reserve. They can borrow reserves as needed after making loans. Whether banks will lend depends rather on (a) whether they have creditworthy borrowers, (b) whether they have sufficient capital to satisfy the capital requirement, and (c) the cost of funds – meaning the cost to the bank of borrowing to meet the reserve requirement, either from depositors or from other banks or from the Federal Reserve.

Whatever is responsible for causing the local credit crunch, trillions of dollars thrown at Wall Street by Congress and the Fed haven't fixed the problem. It may be time for local governments to take matters into their own hands. While we wait for federal lawmakers to get it right, local credit markets can be revitalized by establishing state-owned banks, on the model of the Bank of North Dakota (BND). The BND services the liquidity needs of local banks and keeps credit flowing in the state. For more information, see here and here.

Concerning the gaping federal deficit, Congressman Ron Paul has an excellent idea: have the Fed simply write off the federal securities purchased with funds created in its quantitative easing programs. No creditors would be harmed, since the money was generated out of thin air with a computer keystroke in the first place. The government would just be canceling a debt to itself and saving the interest.

As for “quantitative easing,” if the intent is to stimulate the economy, the money needs to go directly into the purchase of goods and services, stimulating “demand.” If it goes onto the balance sheets of banks, it may stop there or go into speculation rather than local lending – as is happening now. Money that goes directly to the government, on the other hand, will be spent on goods and services in the real economy, creating much-needed jobs, generating demand and rebuilding the tax base. To make sure the money gets there, the 1935 law forbidding the Fed to buy Treasuries directly from the Treasury needs to be repealed.