And we go to Happyville, instead of to Pain City. (Photo: Pete Souza / White House)When talking about ObamaCare, single payer advocates sometimes hear “But the ACA helped me,” or “the ACA helped my sister,” and so on. Of course, a program as large as ObamaCare is bound to help somebody; it’s just that single payer advocates want everybody to be helped in the same way that you or your sister were. And that’s the problem with ObamaCare: It doesn’t treat health care as a basic human right that should be guaranteed for all. Instead, ObamaCare uses a complex and intricate Rube Goldberg-esque system of eligibility rules to throw people into various buckets by past (and projected) income, age, existing insurance coverage, jurisdiction, family structure, and market segment. In a system so complex, people will inevitably be thrown into the wrong buckets, or land between buckets, because their personal circumstances don’t mesh well with the Rube Goldberg device.* Some citizens get lucky, and go to Happyville; others, unlucky, end up in Pain City. The lucky are first-class citizens; and the unlucky, second class. In an earlier post, I gave three examples of the whimsical and arbitrary distinctions that ObamaCare makes between citizens who should be treated equally; in this post, I’d like to give three more.

First, if you’re in the Beltway political class, you could a lucky winner, and a first-class citizen. If you’re in any other class, you’re a second-class citizen, by definition. This story has been simmering for a long time. Politico:

Dozens of lawmakers and aides are so afraid that their health insurance premiums will skyrocket next year thanks to Obamacare that they are thinking about retiring early or just quitting.

The fear: Government-subsidized premiums will disappear at the end of the year under a provision in the health care law that nudges aides and lawmakers onto the government health care exchanges, which could make their benefits exorbitantly expensive.**

Democratic and Republican leaders are taking the issue seriously, but first they need more specifics from the Office of Personnel Management on how the new rule should take effect — a decision that Capitol Hill sources expect by fall, at the latest. The administration has clammed up in advance of a ruling, sources on both sides of the aisle said.

Rep. John Larson, a Connecticut Democrat in leadership when the law passed, said he thinks the problem will be resolved.

“If not, I think we should begin an immediate amicus brief to say, ‘Listen this is simply not fair to these employees,’” Larson told POLITICO. “They are federal employees.”

Yeah, and we’re consumers citizens. Where’s our amicus brief? I don’t have much sympathy for the lawmakers (supposing the country to retain the rule of law), almost half of whom are millionaires, and most of whom view “public service” as an ill-paid internship on the road to the real money. I have more sympathy for the staffers, some of whom are known to dine at Taco Bell. That said, this “problem,” when push comes to shove, will be “resolved” in exactly the same way that the problem of flight delays from laying off controllers during the ongoing sequester was resolved: Congress immediately put those controllers back to work, because they wanted to get back to the district as fast as they could. Nothing else changed. So, on ObamaCare, the solons and the staffers will make sure they get taken care of, and put the rest of us on the bus to Pain City.

Second, if you’re covered you’re a first class citizen. But if you’re not, you’re a second-class citizen. After all, ObamaCare says that health insurance is desireable, even ethical (even to the extent of using the Orwellian label “shared responsibility payments” for the mandate’s fines and penalties***). But not even the most dedicated apologists claim that ObamaCare will be anywhere near universal; only 7 million will be signed up in the first year (double that for expectations management, and it’s still pathetically low). When ObamaCare is fully implemented, it will haveexpanded coverage to 30 million, leaving 26 million uncovered. As one rising Democratic politician said in 2007:

In the 2008 campaign, affordable, universal health care for every single American must not be a question of whether, it must be a question of how. We have the ideas, we have the resources, and we must find the will to pass a plan by the end of the next president’s first term.

[W]e can’t afford another disappointing charade in 2008. It’s not only tiresome, it’s wrong. … Wrong when 46 million Americans have no health care at all. In a country that spends more on health care than any other nation on Earth, it’s just wrong.

Third, if you’re targeted by Enroll America, ObamaCare’s marketing operation,**** you’re a first-class citizen. If you’re not, you’re second class. Reuters describes how ObamaCare is about to be marketed:

The effort will focus on selling the merits of the Patient Protection and Affordable Care Act to 2.7 million Americans with little or no health coverage, who are 18-to-35 years old, mostly male, and largely nonwhite, including many who are black or Hispanic, officials involved in the planning told Reuters.

The idea is to get them enrolled in private health plans through online marketplaces that will offer coverage in all 50 states at prices defrayed by federal subsidies, which many should qualify for because of their lower incomes and lack of adequate insurance.

Participation of young consumers is central to the success of the new state healthcare exchanges, and Obama’s reform law, because the young tend to have little need for medical services and are cheaper to insure. That will compensate**** for older, sicker people who are expected to sign up in droves because the law bans discriminatory pricing and treatment for those with preexisting conditions.

Current and former administration officials said the outreach will employ the same methods used in Obama’s reelection campaign, which relied heavily on social media, grass-roots organizing and demographics to reach young people, minorities and women. Members of the young target audience tend to be concentrated in major metropolitan areas, and about a third are believed to live in just three states: California, Texas and Florida.

The objective is to “surround” low-income young adults with messaging about the healthcare benefits by tapping channels more apt to reach them: cable television, radio, churches, Facebook, Twitter, YouTube, online chat rooms and youth-oriented magazines. The White House and HHS are also in discussions with celebrities, sports leagues and franchises that may be willing to help promote coverage.

Well, who are these “older, sicker people who are expected to sign up in droves”? As it turns out,HHS’s Center for Medicare and Medicaid Services commissioned a study that breaks them down into marketing segments, and we have the slides. There are six segments in all, three of which are not worth marketing to (including the “vulnerable & disengaged), leaving the remaining three: “Sick, active, & worried,” “Healthy & Young,” and “Passive & Unengaged.” 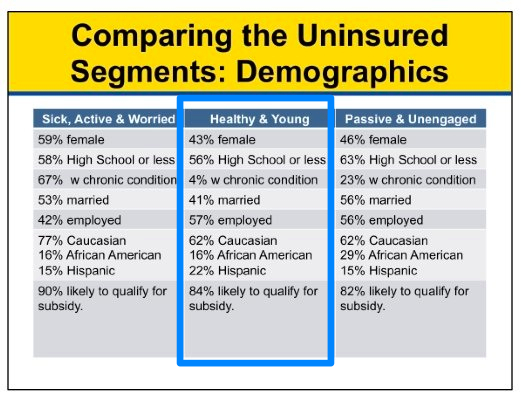 As we have seen, Enroll America is going to target the middle column for a trip to Happyville: The “Healthy & Young.” Presumably, the “droves” will come from the left-hand column, the “Sick, Active, and Worried,” exactly because they’re “active” and “worried,” and not from the right-hand column, since that segment is “passive” and “unengaged.” Will Enroll America’s marketing be able — or even seek — to transform them to active and engaged health insurance consumers? If so, they’re not planning for it. Here are the barriers and motivations for all three segments to seek coverage: 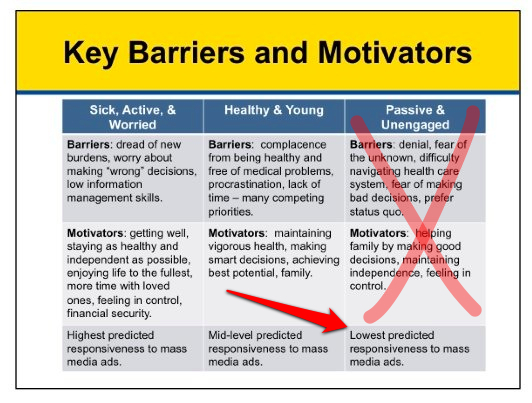 First, Enroll America’s marketing will be addressed to low-income young adults, and the “Passive & Unengaged” non-droves are less likely to be young. Second, as the slide above shows, they are not responsive to mass media, knocking these channels Reuters mentions — “cable television,” “radio,” “youth-oriented magazines,” “celebrities,” “sports leagues,” and “franchises” — out of the picture. Finally, let’s look at Internet usage: 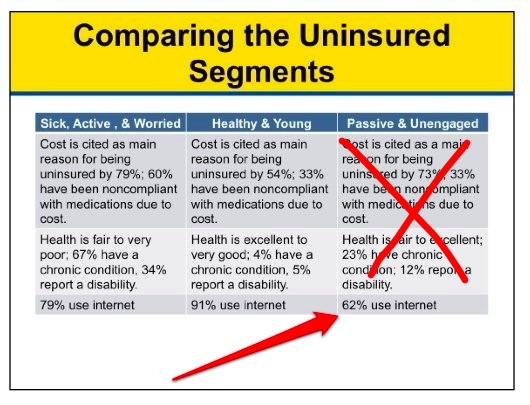 As we see, the “Passive & Unengaged” are much less likely to use the Internet, which knocks out the “Facebook,” “Twitter,” “YouTube,” and “online chat room” channels. That leaves — at least as this story describes Enroll America’s marketing strategy — the “churches” as the sole remaining channel to reach the “Passive & Unengaged.” I don’t see how that can possibly be enough.

According to the study, the “Passive & Unengaged” are about 20% of the uninsured population. If there are 56 million uninsured, that would mean that Enroll America is, in essence, sending some large fraction of 11,200,000 citizens to Pain City, rather than making an attempt to engage them. Does that make them second class citizens? I think it does.*****

NOTE * ObamaCare apologists, at this point, play the incrementalist card, and say that we are only at the beginning of a long process, and that many improvements and reforms have yet to be made. They ignore the fact that we have proven systems of universal coverage. We have at least one in the great Republic to the North, and only one eligibility rule change is needed to implement that system here: Lower the age of eligibility for Medicare to 0. ObamaCare apologists, who consistently refused and still refuse to put single payer “on the table” are in essence performing a medical experiment on the American people while refusing them informed consent. Ask your doctor how they feel about the ethics of that.

NOTE ** ObamaCare apologists, at this point, play the “no rate shock in California” card. This from Trudy Rubin of CJR deconstructs the public relations.

NOTE *** With a single payer system, “shared responsibility” would not involve handling a chunk of rent to the health insurance companies, since the tax system would handle this duty of citizenship.

NOTE **** Of course, with single payer Medicare for All, there would be no need for the government to act like a private entity and adopt the actuarial business model, as Obama, the Democrats, and Enroll America have; providing for “the general welfare” would come first.

NOTE ***** One might give consideration to the idea that Enroll America — which is full of political operatives — is not like a political campaign, but is a political campaign; the opening shots of Campaigns 2014 and 2016. Of course, it could be a coincidence that voters in CA, FL, and TX are being targeted, and those voters in Obama’s youthful, black, and Hispanic demographic. After all, an alternative approach would have been to target those who actually need care. Given how adept the tech dude[tte]s of Team Obama are at slicing and dicing data, one must believe that approach was considered, and rejected.

Obamacare might talk about equality, but even within its legislation there are still crippling hierarchies.