The major newspapers of Raleigh-Durham, Winston-Salem and Charlotte, North Carolina all passed on publishing this editorial about proposed fracking regulations for North Carolina and how it relates to Pennsylvania. Why? I’m not sure, but thankfully I have Public Herald where +Truth is king in the land of the public interest.

Side-bar: Did you ever notice that many mainstream news sites list the advertising staff first, then news staff?

I’m not picking on Charlotte Observer by any means; they are joined by many others. Assuming the average North Carolina resident reads from left to right, Raleigh News & Observer does the same.

At this critical time for North Carolinians, factual information is your best friend. Newspapers are a cornerstone to a well informed democracy but those in North Carolina would rather you not see this information. Read the editorial below, and leave a comment about why you think the mainstream press didn’t print it. You can comment on North Carolina’s proposed regulations yourself here.

According to Carolina Public Press, companies may start conducting tests for fracking in Western North Carolina as soon as September. The state is holding three more public hearings about proposed regulations for fracking – the first was August 20th – and is accepting written comments now until September 15th.

If North Carolina’s proposed regulations are implemented, some of the state’s most visited areas will be industrialized and public health may be compromised.

Water and natural landscapes are the epicenter of North Carolina’s booming tourism and recreation economy. In 2013, domestic tourists spent a record $20.2 billion in the state, up from $19.4 billion in 2012. After ten years of slickwater, horizontal, hydraulic fracturing for natural gas in Pennsylvania, where tourism is also a major economy, a lot of lessons have been learned at a price the public and elected leaders are just now beginning to understand.

For example, in Bradford County, Pennsylvania, Chesapeake Energy had to perform 23 cement squeezes on gas wells in a roughly 28-mile area where well casing failures led to water contamination. 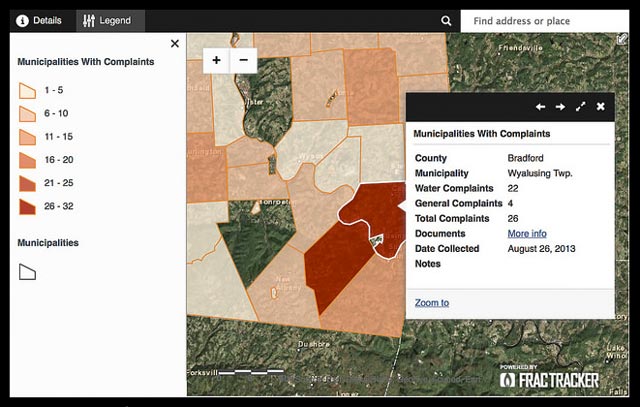 Cement squeezes” are attempts to fill cracks in casing and cement where gas and production fluids leak out and contaminate aquifers. In Pennsylvania, methane and other contaminants have repeatedly leaked into groundwater aquifers through these cracks. In one case, methane reached four times the explosive level for a home, forcing the landowner to relocate after signing a non-disclosure agreement or ‘gag order’ in exchange for financial settlement from the company.

These cases and many others are available in the 2013 investigative documentary Triple Divide — produced by Public Herald Studios. Triple Divide recently finished a five-screening tour through North Carolina as part of a national tour to states where fracking is being proposed thanks to Investigative News Network and Knight Foundation (no newspapers published press releases sent to them about the screenings either).

One investigation in Triple Divide uncovered the Nebraska Grout Study, which found that there is not a single type of cement that stays adhered to the well casing. It’s a problem state regulations have not been able to fix, and one veteran oil and gas workers say will make all wells leak over time.

While North Carolina’s proposed regulations detail well cementing standards designed to prevent water pollution, the laws do not indicate how contaminated groundwater zones will be cleaned up when it does happen. As explained by attorney Bob Ging in Triple Divide, lawsuits for landowners in Pennsylvania whose water has been polluted can be won, “but the groundwater stays polluted.”

Carolina’s fracking rules require a series of water tests after drilling when contamination is suspected, but legislators failed to outline details for pre-drill water testing, before drilling, to accurately establish baseline water quality. Predrill tests provide the most important data in water contamination cases and the only science the public has to prove water contamination. Similarly vague laws about these tests in Pennsylvania has led, and still leads, to serious injustices which Public Herald outlined in detail with Triple Divide.

Oil and gas water tests cost an average $500-1000 dollars and are recommended quarterly by attorneys and hydrogeologists. Only requiring pre-drill testing within half a mile burdens private water well owners further away, but still within the ‘zone of potential contamination,’ with the added cost of pre-drill and post-drill testing and water replacement when polluted. Legislators in North Carolina should take a close look at the Sugar Run Gas Migration Investigation (GMI) case before approving any regulations.

It’s not uncommon for water contamination to occur several miles from fracking operations in Pennsylvania. In the Sugar Run case, homeowners suffered contaminated water miles away from the wellhead. However, Carolina’s proposed regulations only require pre-drill testing 1/2 mile from the wellhead, which leaves incomplete water quality baseline data if a case like Sugar Run unfolds. 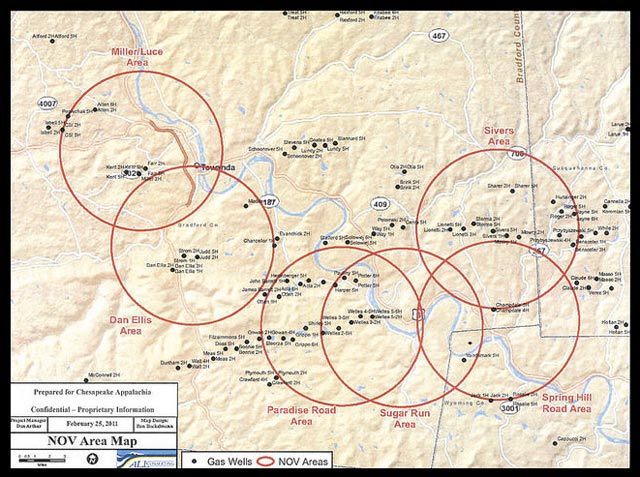 Circles indicate the radius of water testing and pollution related to the Sugar Run GMI. For more details on this case please see Public Herald’s #fileroom.

And it’s a step back for the leaseholders of Carolina when regulations don’t indicate how long an alternative water source will be provided to impacted landowners. Many families in Pennsylvania have been left without water during water contamination investigations and are left to pay the cost of buying other water out of their own pocket.
The proposed Carolina regulations also allow for state preemption of local laws that attempt to limit or outright prohibit fracking within a community. A similar law was passed in Pennsylvania, but was declared “unconstitutional” in the state Supreme Court. Already, counties and towns in North Carolina are passing local laws banning fracking anyway, in defiance of the state and in honor of a community’s right to self-govern. Carolina’s proposed regulations outline an undemocratic approach to land management, opting for “big government” control over communities’ interests.
In North Carolina, legislators have the opportunity to investigate the data on water contamination and other impacts to land, property, and life in Pennsylvania. For over three years, our investigative news nonprofit Public Herald has digitized hundreds of state oil and gas water contamination files, collected monthly at Pennsylvania’s Department of Environmental Protection, the state’s sole regulatory authority over fracking.