A pre-emptive raid by the Chicago Police Department (CPD) on the home of two Occupy Chicago activists may have happened without a search warrant, said the National Lawyers Guild (NLG), and led to the disappearance of nine activists into police custody without charge for almost 24 hours.

“I’d like to stress that we have done nothing wrong,” said Zoe Sigman, an Occupy Chicago activist whose home was raided. “We have been planning to protest NATO and there is nothing illegal about expressing our feelings about a war machine. Now we’re being treated as mere criminals. As if we’re part of an organized crime that they’re trying to take down. Who knows what they’re going to pin on us. We’re terrified.” 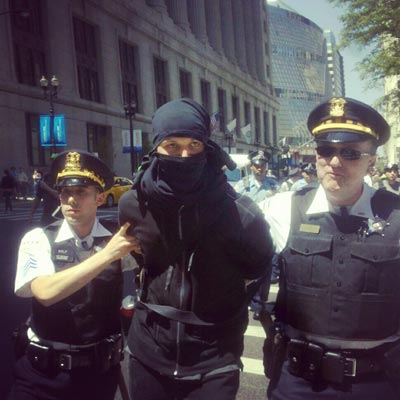 A protester, reportedly a street medic by the name of Henry, is arrested by Chicago Police during the National Nurses United rally with Tom Morello in Daley Plaza, Chicago. (Photo: Joe Macaré)The raid of an apartment on Chicago’s Southside Bridgeport neighborhood occurred on Wednesday evening around 11:30 PM. So far, none of the activists have been charged and four were released Friday morning. According to witnesses, the raid was conducted by the Organized Crime Division of the CPD and a warrant produced at the site didn’t have the signature of a judge.

The use of pre-emptive arrests is troublesome, said lawyers following the proceedings.

“It’s actually fairly common at national security events for the police to conduct preempetive actions, so this is distressing but not surprising,” said NLG legal worker Kris Hermes. “We will remain vigilant in trying to keep the city accountable, especially when they have not provided any idea of what they are holding people on.” Hermes continued, “We think the city should immediately dismiss all of the charges and we are urging them to do that,”

The CPD has released claims that the raid recovered Molotov cocktails, though activists said that the equipment is actually for home brewing of beer.

“Occupy Chicago demands the immediate release of the peaceful protesters terrorized by the Chicago Police Department in Wednesday nights raid,” said Rachael Perrotta of the Occupy Chicago Press Committee in a statement. “We are getting a taste here in Chicago of what it’s like to live in a militarized police state, with non-violent demonstrators targeted for expressing their First Amendment Rights and for standing up against the NATO war machine.”

The North Atlantic Treaty Organization (NATO) summit to be held in Chicago was designated a National Special Security Event, which puts the Secret Service in charge of “event security”; the FBI in control of “intelligence, counter terrorism, hostage rescue and investigation of incidents of terrorism or other major criminal activities”; and the Federal Emergency Management Agency (FEMA) in charge of “recovery management in the aftermath of terrorist or other major criminal incidents, natural disasters or other catastrophic events,” reported the Indypendent.

A week of action leading up to the summit and connecting local and national injustices to NATO militarization has seen an increased police presence, but this may only be the tip of the iceberg.

At an action against the Keystone XL pipeline Thursday, reported ABC News, “Dozens of uniformed Chicago police stood guard nearby, though they made no arrests. But around the corner a couple blocks away back-ups were apparently standing by. Inside 15 unmarked passenger vans they were dressed in black uniforms with riot gear.”

Police have said that rather than tear gassing entire crowds, they will used more targeted “snatch and grab” tactics.

But these kind of pre-emptive actions are ripe for illegality, said lawyers.

“Snatch and grab” can be used if a person is committing a crime, said John Stainthorp, an attorney with the People’s Law Office. “But, if they’re not actively involved in breaking the law at that time, you cannot extract people. Extracting is an arrest and it doesn’t matter whether you hold them for an hour or ten hours or ten days. If you start to take action against them, [and they’re doing nothing wrong,] that’s illegal.”

Brian Bean, with Occupy Chicago, says that he is not fooled by the CPD “putting on a nice face.” “They will use the force that the state often uses to repress dissent and intimidate protesters,” said Bean, “as we saw in Wednesday’s raid.”

Chicago has one of the most advanced surveillance systems in the country, with cameras that have facial recognition and automatic tracking software.

A leaked document of what the CPD’s policy toward journalists reporting on the protest said:

“Those who follow protesters onto private property to document their actions also will be subject to arrest if laws are broken. Any member of the media who is arrested will have to go through the same booking process as anyone else. Release of equipment depends on what part the equipment played in the events that led to the arrest. There will not be any quick personal recognizance bond just for media members.”

Illinois also has an eavesdropping law which, in some situations, makes the filming of a police officer a crime, but the edict will be suspended for the NATO protests, the leaked document said.

Since the week of action against the NATO summits began, the NLG said that 20 people have been arrested and others have reported being stopped and searched.

But activists say this gives them even more reason to head into the streets.

“It’s important to continue protesting, because this tactic was obviously an attempt to intimidate,” said Bean. “We will fight against whatever tactics come out against us and continue to protest.”

Hermes agreed: “We don’t want people to be discouraged from coming out and protesting. We are hoping activists stand up to police intimidation and speak their mind, which they should be allowed to do under the constitution.”

Share
This article may not be republished without permission from Truthout.
Yana Kunichoff