For interest groups that sought to influence Washington’s thinking on the massive trade package set to bind together 40 percent of the world’s economy, Monday’s announcement of an agreement on the terms of the Trans-Pacific Partnership was a long time coming.

Over eight years of negotiations, 487 clients paid lobbyists to meet with or contact lawmakers and administration officials to discuss the trade pact, a Center for Responsive Politics analysis of lobbying data shows. “Trans-Pacific Partnership” or “TPP” was mentioned 4,875 times in lobbying filings since 2008, when the US entered the negotiations. (Not included are third-quarter 2015 lobbying reports, which are due to Congress on Oct. 20.)

The format of lobbying reports makes it impossible to tell exactly how much money companies threw behind efforts to influence those lawmakers and officials on TPP. All told, companies and groups paid lobbyists $2.6 billion while TPP was on their agenda, though that figure includes the companies’ outlays to lobby on all issues listed along with TPP on each report.

The lobbying ramped up with each year the negotiations remained in place. Just two organizations mentioned the trade pact in their 2008 filings – PepsiCo and Neptune Orient Lines – but that number exploded to 1,317 in 2014. As of July, clients had mentioned TPP in their reports 763 times in 2015. 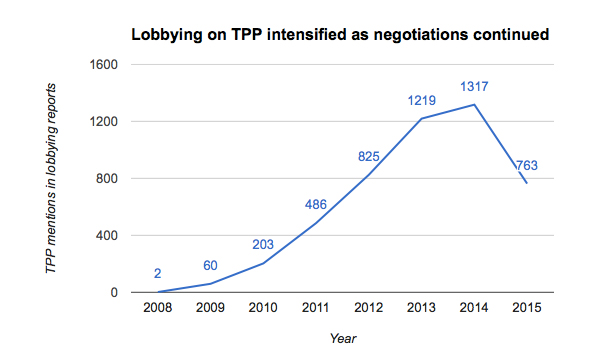 But, as the final countdown for TPP’s implementation begins, some of those big spenders are less than happy with the final terms. With trade promotion authority in hand, the Obama administration could bring home the deal for Congress; now, the World’s Greatest Deliberative Body will get an up-or-down vote on the deal – lawmakers can’t change the terms. Yet some of TPP’s biggest critics since Monday, like PhRMA, the Biotechnology Industry Organization, Sierra Club and the AFL-CIO, issued statements opposing some of the deal’s key terms on Monday.

After extensively lobbying to support TPP, PhRMA recoiled on learning that negotiating countries had agreed to a shortened period during which their member companies’ data on biologic drugs may be kept secret. All told, PhRMA lobbying reports that mentioned TPP, along with other issues, accounted for $110 million of PhRMA’s total lobbying spending since 2009, when it began its efforts to weigh in on the trade deal.

PhRMA, along with the AFL-CIO – which will likely oppose TPP and says it encourages lawmakers to carefully review the terms – were among the earliest organizations to try to influence the outcome of the talks. Sierra Club, opposed to the “polluter-friendly” deal, joined them in 2010; every lobbying report filed by the environmental group since then has mentioned TPP.

It’s not over yet: Congress will pick apart the terms of the deal over the coming months, which it must approve or nix in its entirety.

Dan Auble contributed to this report.