In the wake of Keith Lamont Scott’s death last month, residents of Charlotte, North Carolina built on their years of organizing against police violence by mobilizing to demand justice and grieve another black man killed by police. As people came together in anger and action, my friend Isabell Moore posted a rather unique message on Facebook directed to her friends participating in the protests.

As a white queer activist and mother of a two-and-a-half-year-old in nearby Greensboro, Isabell wanted to know if anyone attending the protests was thinking about child care. This was a Facebook message on the group page for Charlotte’s Standing Up For Racial Justice, or SURJ, chapter. Some of the folks who were on the thread were actually at a planning meeting in Charlotte and able to bring the question to the larger group. The response was positive, and after a few days of feverish work with fellow activists in her area, Isabell found herself preparing to welcome kids of all ages to a downtown Charlotte church’s Sunday school room.

The idea of providing child care to activists had been on Isabell’s mind since attending an event several weeks earlier. The Queer People of Color Collective in Greensboro had brought author and activist Alexis Pauline Gumbs to town to talk about her new anthology “Revolutionary Mothering: Love on the Front Lines.” Gumbs began the event by saying, “I hope and expect to hear kid sounds in the room during the event.” That was a different kind of message for Isabell, who — like lots of parents — goes into spaces feeling hyper conscious of the noise her child is making. This welcome for her and her son resonated and, according to Isabell, “Gave me the foundation to think that I shouldn’t just stay home” while her son Jack and partner Nego went to Charlotte.

“We should all go and see how we can support other kids and parents,” Isabell remembered saying. “Those of us who are white and partnered have a lot to learn from black activist parents and from single parents.”

When I think of child care in the movement, I think of trying to keep my kids quiet in the corner and drawing with them while I listen with one ear. Half of the people in whatever meeting I am in are distracted and charmed by my kids and try — after they have settled in and are actually engrossed by their project — to get them to sit on their laps, bursting my carefully constructed kid bubble. The other half are distracted and irritated by the kids and shush them more loudly than they are whispering. More often than not, the meetings are not worth the trouble. At the actions, I trail behind with a pile of coats and bags on the stroller, bribing my kids into line with a steady stream of snacks and promises of hot chocolate afterwards. I end up being the person people chat with, and I miss most of the substance of what is happening. That, or my husband Patrick takes the kids out of the meeting, vigil or demonstration, and I participate on my own.

To talk with Isabell about these issues is to also be connected to a forgotten and suppressed history of women’s resistance. Isabel told me about a book she had just read about a strike among black washerwomen in the late 1880s in Atlanta. The women were formerly enslaved people who began organizing for their rights. They brought their kids along. Where else were the kids going to be? “I was reminded that children have always been part of people’s work for rights and justice,” Isabell explained. “What does it take to make our movements today more family friendly?” 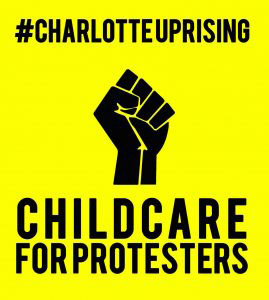 Graphic created by Taylor Chapman.What Isabell and her friends built in Charlotte wasn’t quite the Laundress Strike of 1881. They had an official, supervised space that would have been familiar to any parent in a religious congregation, which makes sense because they used a church facility and had to comply with the it’s rules. There were sign-in and sign-out sheets, a questionnaire about food allergies and medications, a waiver form, and volunteers had to be checked against the sex offender registry before looking after any young people. It was more formal than Isabell imagined, but the rules came with the free space and definitely served to reassure parents leaving their kids with strangers for a few hours.

While Isabell and other organizers wanted to help create a space where parents could leave their kids for a while to participate fully in the protests, she didn’t want to make people feel like they had to do it. “We wanted to support a culture where kids could be with their families in the protest or in planning meetings,” she said. So, the organizers offered child care in a way that helped people feel like they had options. More, it was a welcome mat for parents and kids, as well as a way of inviting their presence and participation.

The value of the space was clear from the first day. “We had a paramedic with two kids who was able to give people trainings on how to stay safe in the streets,” Isabell said. “Everyone was able to benefit from the skill set of this mother, who wouldn’t have otherwise been available had her kids not been able to play a few doors down. It really underlined for me how important it is for movements to be kid friendly. Child care is not just a nice thing to do to include parents, it’s an essential thing to do to help our movements be most effective, because we can access a broader range of skills when parents are freed up.” What’s more, as she noted, the space gave people who — for whatever reason — couldn’t be in the streets “a way to plug in and be helpful, be participating in the movement.”

The child care space was a lot busier on the next day, with kids and families coming and going all day. It was Saturday, September 24, and thousands of people came out in Charlotte to participate in a permitted march convened by a coalition of groups. They demanded the release of the dashboard footage of the shooting of Keith Lamont Scott, justice for victims of police killings, and respect for human and civil rights. Emmanuel Daniels, a participant in the march told the Charlotte Observer, “I want this community to be a community. No more fear. No more fear of cops. There are kids in my neighborhood who are afraid to go outside.”

Thanks to the child care space, however, parents could at least feel safe bringing their kids outside for the protest. While volunteering the previous day, Sebastian and Maribel Cobarrubias realized that lots of parents wanted to go to the march with their kids, but only if they could march together in a kind of “baby bloc.” So they put out a call on social media for parents and kids to meet up before the march and stick together. 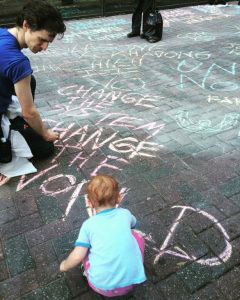 A child helps draw with chalk on the sidewalk during the march in Charlotte on September 24. (WNV / Roan Boucher)On the day of the march, Isabell did a shift at the child care space, and then joined the march with her son and another family. They found Nego and Cakalak Thunder — a radical drum core protest group — and marched along to the energetic beat. “I felt more connected to everything, having helped to make the child care space and knowing that people in the crowd had seen info about child care on social media and knew to expect kids.”

The ripple effect of this work extended beyond this one weekend and the feeling of having contributed. Isabell reports that SURJ now has a child care committee alongside legal, medical and media committees. Black Lives Matter organizers in Charlotte are also embracing this new emphasis. And, according to Isabell, that “has both symbolic value and real value.”

When I am trying to decide whether or not to bring my kids to an action, I tend to zone in on the times it hasn’t worked very well — like when I missed the whole action because I was nursing Seamus at a Starbucks and then went to the wrong place. Then there was the time I spent the whole silent vigil a block-and-a-half away because there was no way I could keep my kids quiet. Another time, they were so freaked out by the heavy police presence that crossing the street into the demonstration caused them to start shrieking and crying.

Talking with Isabell helped me focus on what has worked — like the time when seeing all the people gathered to say “Black Lives Matter” moved my little people deeply and impressed them more than any polemic from their mother, or when they loved holding signs and waving at cars going by, or when they played off to the side and swayed as the vigil sang songs they kind of knew.

Our conversation also reminded me of why bringing kids along is so important. It is important because it is not just bringing them along, it is making our movements work for kids and families. When parents leave their kids at home, the partner or grandparent or neighbor is also supporting the movement by watching a kid, but the rest of us don’t see or celebrate that contribution. It’s powerful to put that contribution right in the middle of the movement. “It makes that work visible. We are helping to shift people’s understanding of what ‘front line’ work is. We are saying, ‘Look, taking care of kids is movement work too.”