By
Brad Friedman,
The BRAD BLOG 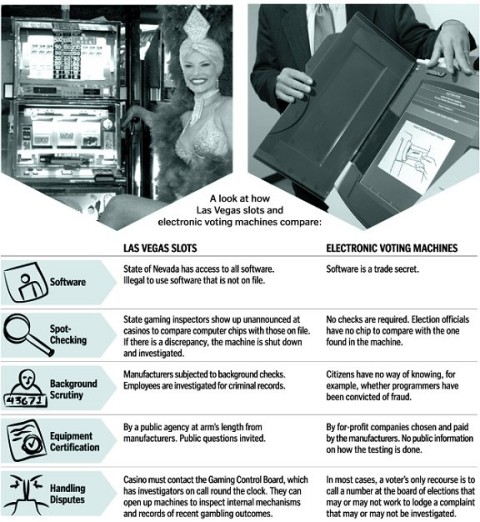 It took two tries, but Carolyn Goodman, candidate for Mayor of Las Vegas and wife of current Mayor Oscar Goodman, was finally able to vote for herself today on Nevada's illegally-certified, 100% unverifiable Sequoia AVC Edge touch-screen voting machines. At least she thinks she did. Whether her vote will actually be counted for her is something that nobody can ever know…

When Goodman pushed the button next to her name on a voting machine at the Public Administration Building downtown, [Chris] Giunchigliani's name popped up.

“I touched my name and strangely ended up with my opponent,” a visibly worried Goodman said from her voting booth.

She pushed the button a second time and successfully voted for herself.

“I think it's the finger nails,” Goodman said afterward. “Obviously, I'm voting for myself.”

No, it ain't the fingernails, Carolyn. It's the machines.

As we revealed in our investigative exposé in the 2008 book Loser Take All: Election Fraud and the Subversion of Democracy, 2000-2008, and summarized in our article on the Reid/Angle election for U.S. Senator just before Election Day last year, Nevada's Sequoia touch-screen voting machines were illegally certified in 2004 by then NV Secretary of State, now recently-appointed (to take the place of disgraced Sen. John Ensign) NV Republican U.S. Senator, Dean Heller.

The failure that Goodman experienced, and noticed, made her just the latest in a string of celebs and candidates who have had similar problems with 100% unverifiable voting machines —- as still used by some 20 to 30% of voters in the U.S. —- either flipping their votes, or not allowing them to vote at all.

Most famously, perhaps, was Oprah Winfrey, who, during early voting in the 2008 Presidential election, noticed that the computer (also a touch-screen made by Sequoia) had dropped her vote for President all together.

Earlier that same year, during February's “Super Tuesday” primary, then NJ Gov. John Corzine (D) was unable to vote for 45 minutes when Sequoia's AVC Advantage touch-screen systems failed to boot up at all when the polls opened.

During early voting in the 2008 general election, election integrity filmmaker Patricia Earnhardt, executive producer of the award-winning 2006 documentary Uncounted: The New Math of American Elections, which deals, in no small part, with the problems and perils of 100% unverifiable e-voting, saw her own vote flipped on an ES&S iVotronic touch-screen machine in Nashville (Davidson County), TN.

The BRAD BLOG has reported on countless such incidents over the past eight years with little or nothing being done, in most cases, to keep the same failures from occurring again in future elections. Indeed, we wrote an entire chapter about similar widespread failures during the 2008 election cycle alone for Project Censored's Censored 2010: The Top 25 Censored Stories of 2008-09.

One of “favorite” occurrences is what happened to poor Randy Wooten, mayoral candidate of Waldenburg, Arkansas in 2006…

Wooten was running for mayor in the rural Poinsett County town with a population of just 80 people that year, when he learned, after the close of polls on Election Night, that he had received a grand total of ZERO votes, as reported by the county's ES&S iVotronic touch-screen voting systems.

As AP noted at the time, Wooten said, “I had at least eight or nine people who said they voted for me, so something is wrong with this picture.” Among those people who Wooten believed had voted for him: himself and his wife.

Wooten wasn't the only candidate to come up with ZERO votes from an electronic voting system, however. After the Republican primary election in March of 2006,The BRAD BLOG reported on the same problem when it occurred for the conservative former state Supreme Court Justice Steve Smith, but on a much wider scale. Smith had attempted to contest the election after learning that he'd reportedly lost the statewide election by 100% in Winkler County. That's right. Smith was said to have received ZERO votes there, despite having won handily in that same county previously. In 2002 he won Winkler by 74%, and in 2004 he'd won by 65%, yet somehow he managed to lose by a whopping 100% in 2006.

In that same 2006 primary election, ES&S and Hart Intercivic voting machines added a full 100,000 phantom votes to the tally in Tarrant County (Fort Worth), TX. Unfortunately, the state's requirement to make one's case in an election contest, even in a statewide case, within just days after the election —- and without access to forensic computer analysis of the corporate e-voting systems —- made it impossible for him to file a contest, despite the obvious and extraordinary failures of the state's e-voting systems.

Everything old is new again. Even in Sin City tonight.

[Hat-Tip for the Vegas article to The Voting News.]

UPDATE 6/8/11: Forgot about this comparison, published by the conspiracy theoristsat the Washington Post in 2006 under the headline “How To Steal an Election.” It shows the difference in the way slot machines are regulated in Vegas versus touch-screen voting systems there and everywhere else. With the mayoral election noted above having been in Las Vegas yesterday, obviously, the comparisons here as apt as ever. Money matters in the U.S., of course. Apparently votes don't…

Fort Lauderdale, Florida – In central Florida, a Congressional town meeting erupted into near chaos on Tuesday as attendees accused a Republican lawmaker of trying to dismantle Medicare…