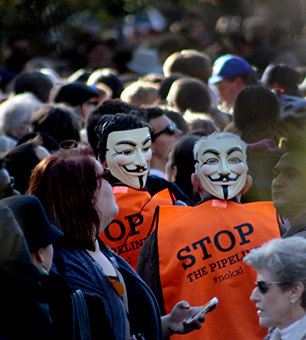 (Photo: tarsandsaction / Flickr)Clayton Williams, the 1990 Republican gubernatorial candidate in Texas, once said about rape that, “as long as it’s inevitable, you might as well lie back and enjoy it.”

Obviously, that was an incredibly insane and ignorant comment.

Fast-forward 24 years, and people are using that same insane rationale with the Keystone XL pipeline.

They’re saying that as long as it’s inevitable, we should just accept it and learn to love it.

And they’re also saying that America is a fossil fuel dependent nation and that the Keystone pipeline will help lower gas prices in America and make us more energy independent.

But the Keystone XL pipeline is not inevitable, America doesn’t have to be a fossil fuel dependent nation, and the oil from the Keystone pipeline won’t do anything to help gas prices in this country.

Big Oil supporters and pundits across the media have been saying that the use of tar sands oil from Canada and the construction of the Keystone XL pipeline are inevitable, but that’s simply not the case.

On Monday’s episode of The Big Picture, I spoke with Susan Casey-Lefkowitz, director of the International Program with the Natural Resources Defense Council, about the State Department’s report on the Keystone XL pipeline that was released last week.

I asked her if the report said that extracting tar sands oil from Canada was an inevitable process.

She said that tar sands oil development is not inevitable, no matter what pundits and Big Oil supporters will try to tell you.

And she pointed out that some people have said that even if we don’t build the Keystone XL pipeline, dirty and toxic tar sands oil will still be transported through the U.S. via rail.

But due to its complex nature, tar sands oil isn’t well equipped to travel by train, and it’s also more expensive to transport by rail. So that’s not a viable option.

Either way you slice it, the use of tar sands oil isn’t inevitable. We don’t have to extract that toxic, dirty, and dangerous stuff from the ground.

Now, what about the talking point that America is a fossil fuel dependent nation and is going to be for the foreseeable future and that because of that, building the Keystone XL pipeline makes sense.

Well, America is becoming less and less of a fossil fuel dependent nation.

The U.S. solar industry had its second largest quarter ever during the third quarter of 2013.

In Texas alone, covering half of a roof with solar panels is enough to generate all of the electricity used by an average family in the Lone Star State.

But solar power isn’t the only clean and green form of energy on the rise.

In Iowa alone, wind power generated nearly 25% of that state’s energy in 2012. And in Texas, it accounted for nearly 10% of energy generated.

Finally, what about the arguments that oil from the Keystone XL pipeline will help reduce gas prices across the nation and make us more energy independent?

Well, even TransCanada has said that oil from the Keystone XL pipeline isn’t guaranteed to stay in America.

Back in 2012, during a Congressional hearing on the pipeline project, Alex Pourbaix, the head of TransCanada’s pipeline division, was asked if he would support legislation requiring Canadian tar sands oil and its byproducts to be sold only in the U.S. He replied, “No, I can’t do that.”

And numerous other studies have found that much of the oil transported through the Keystone XL pipeline will be exported from the Gulf of Mexico.

We won’t see a drop of that toxic, dirty and dangerous tar sands oil, unless of course we’re forced to deal with a tar sands oil spill disaster.

And the Keystone XL pipeline will cause gas prices to rise, not fall.

A report by Consumer Watchdog found that if the Keystone XL pipeline is approved, Americans, especially in the Midwest, will see higher gas prices, adding up to an addition $3-4 billion each year.

That’s roughly a 20-40 cent increase on a gallon of gas in the Midwest, and a few cents increase everywhere else.

But our fight is not over.

We can’t let those who think that the pipeline is inevitable, or that America is always going to be a fossil fuel dependent nation, erase the progress that we’ve made.

Most importantly, we need to make it clear to Big Oil, the Obama administration, and their supporters that we aren’t just going to “lie back and enjoy” the Keystone XL pipeline and the toxic, dirty and dangerous oil that it would be transporting.

It’s time to stop the environmental rape of America and our planet once and for all.

Share
This article was first published on Truthout and any reprint or reproduction on any other website must acknowledge Truthout as the original site of publication.
The Daily Take Team
Truthout
Share
Economy & Labor