Ten years ago Josh Cutler never could have imagined that he’d be out leading hundreds of Lyme patients in protest at the headquarters of the Infectious Diseases Society of America (IDSA) in Arlington, Virginia. But when Josh was 25, he watched a friend die of Lyme disease. Then at age 26, he became sick too. Now 34, he’s married with two young kids and has been disabled and unable to work for the last five years. He wanted to live to see his children grow up, so he knew he had to do something to create change. 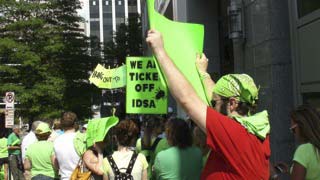 Lyme patients march at IDSA protest. (Credit: Lisa Hilton)What is the IDSA you may ask? It’s a private medical association made up of physicians, scientists and other healthcare professionals who specialize in infectious disease. According to their website, they’re dedicated to improving the health of individuals, communities and society by promoting excellence in patient care, education, research, public health and prevention. Most importantly (for our purpose in this discussion), they are responsible for creating the diagnostic and treatment guidelines for Lyme disease that are primarily used by all the big guns – the Centers for Disease Control (CDC), the National Institute of Health (NIH), physicians and insurance companies.

This distinguished organization started back in 1967 from the humble beginnings of two little dinner groups. Their original goal was to cultivate the growing knowledge of infectious diseases within their small membership, who were the most promising researchers in their field. Yet, somewhere along the way, something went very awry within this new society that has since grown to over 9,000 members.

Flash to May 22 and 23, 2014 when hundreds of irate Lyme patients led by Josh are protesting in front of the IDSA headquarters, in a desperate attempt to change IDSA policies that prevent them from receiving care. In the tradition of ACT UP, the AIDS activist movement that sprouted up back in the 1980s when patients were dropping like flies and nobody cared, protesters took to the streets outside the IDSA building, demanding changes in diagnostic criteria and treatment protocols. 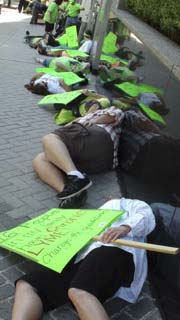 Lyme protesters stage die-in surrounding the IDSA building. (Credit: Lisa Hilton)Sick patients descended on the place that became the office for the original dinner partiers, and conducted die-ins with protesters laying their bodies on the ground in order to block the entrance. Many of the protesters were in wheelchairs or stood with IVs. A truck circled the building throughout the day bearing signs that read, “Tell the IDSA to Stop Rejecting Science!” and “Patients with Chronic Lyme Disease Are Dying: Fight for a Cure!” IDSA mail servers, fax machines, phone lines and social media pages were bombarded with angry pleas.

Quite a turn of events from those quiet little dinners in the early days. But what led to all of this? As we’ve silently developed a massive worldwide Lyme epidemic, where untold millions are suffering and unable to get treatment because of outdated IDSA guidelines, these IDSA members evidently think they’re still at the dinner party – “as the band plays on.” Has the IDSA turned into a giant medical LinkedIn group that lets its members’ patients suffer so they can say they’re part of a prestigious organization and have something to put on their resume the next time they’re applying for a job or trying to secure a well-paid speaking position? That’s what the hundreds of protesters will tell you, saying that the IDSA does not in any way represent the needs of Lyme patients, the majority of whom are too sick to get out of bed to join in on the dinner party.

Much of the strife between IDSA Lyme researchers and patients centers around the notion of a chronic infection. The IDSA contends that the Lyme bacterial infection is always eradicated after a simple two to four week course of antibiotics. Debilitated patients like Josh, who have been crippled by the disease, have been fighting for decades for recognition that the infection can persist. A growing body of research supports their claims. Seventy-seven peer-reviewed studies from 1977 to 2012 show that the Lyme infection can persist despite recommended treatment. And yet, there doesn’t seem to be one researcher in this IDSA group of 9,000 who has the backbone to stand up for Lyme patients, not one who has the intellectual curiosity to insist that the organization seriously consider, without prior bias, the notion of a chronic infection.

Meanwhile, rates of Lyme are skyrocketing. In 2013, the CDC announced that rather than 30,000 new US cases annually, there are likely 300,000. Other Lyme experts, like the New York Times best-selling author Richard Horowitz, MD, point to factors (misdiagnosed cases, inaccurate testing and regions not included in the assessment) that indicate the actual rates are likely in the millions. Researchers featured in a recent film about the worldwide Lyme epidemic, Lyme Disease: A Silent Epidemic, discuss how 25 percent of some African tribes have Lyme disease, which is often misdiagnosed as malaria.

Josh asserts that the diagnostic criteria and treatment for Lyme are outdated because they’re not based on current science. The National Guidelines Clearinghouse (NGC), which is part of the US Department of Health and Human Services, lists guidelines for most diseases. IDSA Lyme guidelines have not been revised since 2006, despite NGC rules requiring that guidelines be revised every five years.

Critical research has emerged in the last eight years that more strongly suggests the possibility of chronic infection. U.C. Davis researcher Stephen Barthold, DVM, PhD, has developed a body of work showing persistence of the Lyme infection in mice, and Tulane University researcher Monica Embers, PhD, conducted the first non-human primate study in 2012 on the Lyme infection and found persistence in rhesus monkeys. Studies like this beg the question, why aren’t the IDSA Lyme researchers, who are supposedly dedicated to promoting excellence in patient care, research and public health, jumping on the bandwagon by pursuing more of this kind of research themselves?

Sen. Richard Blumenthal of Connecticut, ground zero for the Lyme epidemic, begged this question himself when he was Connecticut attorney general during an antitrust investigation of the IDSA guideline committee in which their Lyme disease guidelines came under review. Over the course of his 17-month investigation, he found undisclosed conflicts of interest among several of the most powerful IDSA panelists. In addition, he uncovered that the panel chairman, Gary Wormser, MD, who had a known bias against the existence of chronic Lyme, had handpicked a panel of like-minded people who ignored or minimized consideration of chronic Lyme while also blocking appointment of scientists with divergent views.

The IDSA’s 2006 Lyme disease guideline panel undercut its credibility by allowing individuals with financial interest – in drug companies, Lyme disease diagnostic tests, patents, and consulting arrangements with insurance companies – to exclude divergent medical evidence and opinion . . . . Medical societies that publish such guidelines have a legal and moral duty to use exacting safeguards and scientific standards. 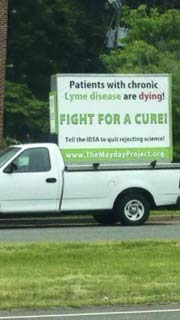 Truck circles IDSA headquarters in protest. (Credit: Josh Cutler)Same old story. Well-meaning dinner party turns corporate. But clearly not all 9,000 IDSA members are experts on Lyme disease and they leave policy decisions to those in the organization who are. Nonetheless, as members of this group, it’s time that they all look up from the dinner table and notice the untold numbers of suffering Lyme patients and remember their commitment to helping people. And then they need to at least make some strong recommendations to the Lyme committee such as: the inclusion of one or two research experts from the Lyme disease community on their panel; the addition of some younger researchers to the committee who can see this issue with fresh eyes; and a focus on finding the answer to the question, “If this large group of sick patients does not have chronic Lyme, what exactly do they have?”

Perhaps it’s time for IDSA members to go back to their original noble goal of improving the health of individuals, so that patients like Josh can go back to caring for their families.

Share
Copyright, Truthout. May not be reprinted without permission.
Jessica Bernstein