Greg Sargent is rightly outraged by a claim from Mitt Romney, the Republican presidential candidate, that President Obama is a job destroyer.

“Romney’s claim that 2 million jobs were lost under the Obama presidency is based on the idea that there’s been a net loss of jobs since he took office,” Mr. Sargent wrote in a post for The Plumb Line, a Washington Post blog, on Jan. 3. “In other words, Romney is taking into account the fact that the economy continued hemorrhaging jobs at a furious rate after Obama took office — before Obama’s stimulus passed. But the figures show that once it became law, monthly job loss declined over time, and turned around in the spring of 2010, after which the private sector added jobs for over 20 straight months, totaling around 2.2 million of them.”

I think this benefits from a figure. Look at the bottom graph on this page (see graph below this paragraph). Does this look to you like a president who “lost jobs,” or like a president who inherited an economy in free fall? You can accuse Mr. Obama of not doing enough to promote recovery — and I have (although the biggest villain here was Mr. Romney’s own party). 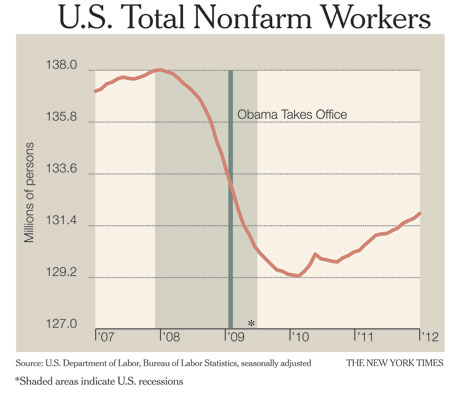 But to claim that Mr. Obama caused the job loss is indefensible.

By the way, that wiggle in the upward climb represents the temporary hiring of Census workers.

Now, if you wanted a more credible case of a president who presided over job losses at this point in his administration, how about this? Look at the graph on the top (refers to graph, below). 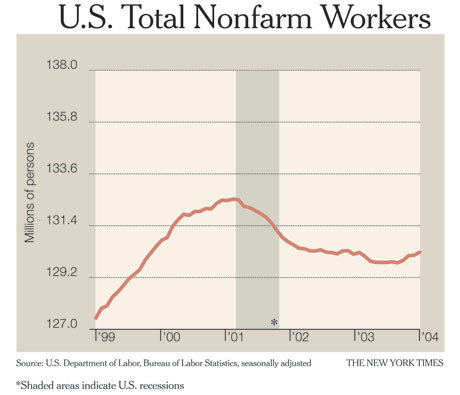 The truth is that I did give President George W. Bush a hard time over his job record — although I’m pretty sure I never accused him of destroying jobs, or even of bearing responsibility for the recession that began on his watch.

So Mr. Sargent has been demanding that Mr. Romney be held accountable for two claims that he makes about jobs: (1) that Mr. Obama has been a job-destroyer and (2) that he, Mr. Romney, created 100,000 jobs at Bain Capital.

Well, some results on the second claim: Glenn Kessler, who writes The Fact Checker blog at The Washington Post, gets a Romney person to explain, and it turns out that he’s looking at the expansion of employment by three companies that Bain was involved with, and we get this: “[Romney spokesman Eric Fehrnstrom] says the 100,000 figure stems from the growth in jobs from three companies that Romney helped to start or grow while at Bain Capital: Staples (a gain of 89,000 jobs), The Sports Authority (15,000 jobs), and Domino’s (7,900 jobs),” wrote Mr. Kessler on Jan. 4. “This tally obviously does not include job losses from other companies with which Bain Capital was involved — and are based on current employment figures, not the period when Romney worked at Bain.”

Mr. Romney wants to count all those losses in the early months of the Obama administration, before any of the new

president’s policies had gone into effect, as belonging to Mr. Obama — as opposed to being related to the economy in free fall that Mr. Obama inherited.

But there’s something else. During the Bush years there was a constant drumbeat of boasting about all the jobs Mr. Bush had created. Created since when? The answer, always, was since June 2003 — the low point of the decade. Implicitly, Bush disavowed responsibility for the first two and a half years of his time in office.

One more interesting fact: Even if you only count the good times, between June 2003 and the coming of the Great Recession, the economy was creating only 148,000 jobs a month. That seems relevant, since Mr. Romney’s economic policy is basically a return to Bushism. Job growth at a similar rate now would bring us back to full employment sometime in the 2020s.

Truthout has licensed this content. It may not be reproduced by any other source and is not covered by our Creative Commons license.
Paul Krugman joined The New York Times in 1999 as a columnist on the Op-Ed page and continues as a professor of economics and international affairs at Princeton University. He was awarded the Nobel in economic science in 2008.