In a lot of ways George Osborne, the chancellor of the Exchequer (or finance minister) is Britain’s answer to Paul Ryan, the Republican nominee for vice president. True, he’s a toned-down version — no Ayn Rand, please, we’re British — but other aspects of the package are there in full force: Mr. Osborne is articulate, has a vision that’s completely at odds with everything we actually know about macroeconomics, and he was for a while the darling not just of the right but of self-proclaimed centrists on both sides of the Atlantic.

Mr. Osborne’s big idea in 2010 was that Britain should turn to fiscal austerity now now now, even though the economy remained deeply depressed; it would all work out, he insisted, because the confidence fairy would come to the rescue.

Never mind those whining Keynesians who said that premature austerity would send Britain into a double-dip recession.

Strange to say, Britain’s recovery stalled soon after Prime Minister David Cameron and Mr. Osborne began their new policies, and the country is now in a double-dip recession.

So is Mr. Cameron rethinking his faith in Mr. Osborne? According to the Financial Times, no. “Mr. Osborne continues to enjoy David Cameron’s backing and will stay as chancellor when the prime minister this week conducts his reshuffle, expected to take place on Tuesday,” wrote the political editor George Parker in an article published on Sept. 2.

Instead of a real policy rethink, what Mr. Cameron and Mr. Osborne apparently have in mind is a set of basically minor twiddles involving credit and planning authorizations, which seem highly unlikely to make any significant difference.

Still, there is criticism from within the Tory party — except what the dissidents want is not a return to conventional macroeconomics, but “right-wing shock therapy.” 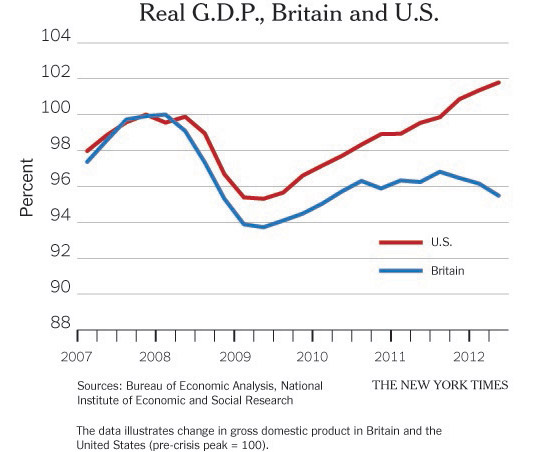 I was particularly struck by this, in the Financial Times’s article: “Although the chancellor insisted that the economy was ‘healing’ he told the BBC’s Andrew Marr there were many obstacles ahead adding: ‘There is no easy route to a magical recovery.’ “

That sounds wise and restrained, but it’s actually completely wrongheaded. Britain is suffering from lack of demand; it could have a quick (not magical) recovery if policy steps were taken to stimulate demand. It’s the belief that the country can’t recover quickly, not the belief that it can, that constitutes economic mysticism.

And the slump — which has now, in Britain, lasted longer than the slump in the 1930s — goes on.

Memories of the Bush Administration

John Updike once wrote a novel titled “Memories of the Ford Administration.” It was largely about sex in the era “after the sexual revolution but before the microbes.”

This isn’t about that. It’s about lies and the lying liars who tell them.

I spent a large part of the George W. Bush years contending, at first almost alone, against the conventional wisdom that, even if you didn’t like his policies, Mr. Bush was a bluff, honest guy. In truth he was deeply dishonest — and all it took to see that was a look at his economic proposals and how he sold them. It was partly because I had reached a judgment on economics that I was able to see the very similar pattern in the selling of the Iraq war, and conclude — really, really almost alone, at least in the pages of major newspapers — that we were being misled into invading another country. Why did Mr. Bush have this reputation for honesty? Because he seemed like a nice, gregarious guy, and because most pundits don’t do actual policy analysis.

And boy, did I get savagely and personally attacked for pointing out the obvious. It really wasn’t until Hurricane Katrina that the obvious went mainstream.

The Paul Ryan affair has felt very similar. Once again you had an obvious flim-flam man — obvious, that is, if you actually looked hard at his proposals. But for quite a while the Beltway, once again demonstrating its unfounded faith in the power of up-close-and-personal impressions, didn’t want to hear it.

I’ve heard that the usual suspects were very angry at me for questioning his bona fides.

It’s starting to look, however, as if the life cycle of the Ryan myth is proving a lot shorter than the Bush version. Even people who were fanatical defenders of Mr. Bush and Krugman-haters seem to have had enough of Mr. Ryan’s shtick, thanks to a dishonest speech at the Republican National Convention last month.

And I think this matters. Mr. Ryan’s true constituency isn’t the Tea Party, it’s the commentariat; strip him of his unjustified reputation as an honest policy wonk, and he’s just another mean-spirited ideologue. Indeed, his character may itself become an election issue. And it should.

Donate Now
Share
© 2017 The New York Times Company
Truthout has licensed this content. It may not be reproduced by any other source and is not covered by our Creative Commons license.
Paul Krugman joined The New York Times in 1999 as a columnist on the Op-Ed p
Paul Krugman
Truthout
Share
Politics & Elections