The Illinois Department of Corrections contacted Truthout Friday, Feb. 7, responding to the “many untruths errors” in a story about a hunger strike at Menard Correctional Center – a response Staughton Lynd noted for its “value” in explaining the ongoing prisoner protest.

“Per doctor’s orders, the offenders are to remain under medical observation in the prison infirmary because they could get dehydrated if they refuse water,” stated a report on the condition of the prisoners provided electronically by Shaer.

The report indicated “hunger strikers are exhibiting no signs of malnutrition,” but added that “they did show signs of dehydration,” which just started. “They apparently stopped taking in water yesterday and it takes 36-48 hours for THAT to evidence itself, which is pretty quick.”

Staughton Lynd and his wife were two of the attorneys to represent prisoners at Ohio State Penitentiary in a class action suit that established due-process rights for those in supermaximum security confinement. Lynd said prisoners sought help in publicizing their peaceful protest. He and his wife responded.

Upon learning of the update from IDOC, Lynd also responded.

“The value of hearing from Mr. Shaer is that he can learn things far more quickly than can we because it takes several days for letters from prisoners to reach us,” Lynd wrote in an email. “Thus, thanks to Mr. Shaer, we know that the hunger strikers have begun to refuse liquids as well as food. This development makes it essential that the hunger strike be resolved as quickly as possible.”

In addition to the urgency, Lynd added that there are possibilities for a resolution.

“The hunger strikers made an offer that once informal face-to-face hearings begin as to when each prisoner can expect to be placed on a less restrictive privilege status, they will come off the hunger strike,” he wrote.

IDOC disputed the prisoners’ depiction of the beating suffered by inmate Armando Velasquez, reported previously. IDOC, writing in response to “unverified reports in documents circulated by various organizations,” and the “following falsehoods contained in them,” stated that prisoner claims are incorrect.

“No beating occurred, at any time,” IDOC told Truthout in an email, also noting, that they do “acknowledge there was significant physical incident,” but maintain media accounts are “patently false.”

IDOC did not provide any more information about the “significant physical incident,” but responded to other claims, namely about heat in cells.

Shaer stated authorities at Menard take proper measures to ensure prison cells are heated and he wrote that inmates made “apparent attempts to lower temperatures and support false claims of ‘no heat’ or ‘cold cells.'” 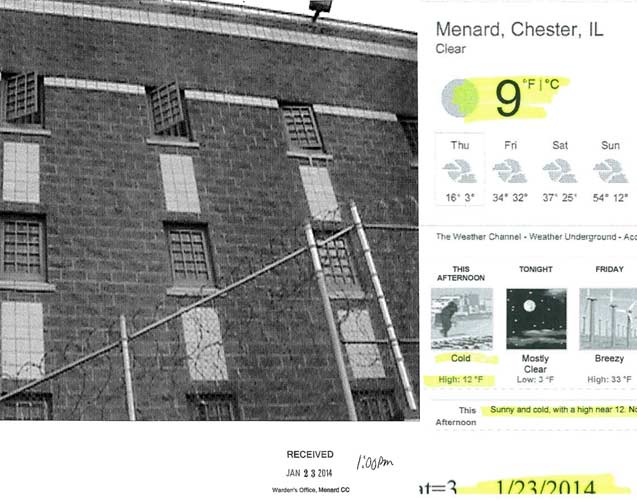 Photo of open windows at Menard Correctional Facility supplied by Illinois Department of Corrections. with the mention, “Note the window photographs and weather (WX) report demonstrating that windows in the AD unit were opened by inmates in apparent attempts to lower temperatures and support false claims of ‘no heat’ or ‘cold cells.'”

No IDOC correspondence addressed the pre-strike grievance acquired by the Lynds and mentioned in the original Truthout article about the hunger strike. A prisoner stated cells had been with only cold water for more than a month in that grievance.

Lynd reiterated that communications with IDOC have value and he suggested there is space opening up for change given the prisoners’ modest request for informal face-to-face hearings to begin so that they can stop refusing food.

“All concerned persons should urge the Department of Corrections and the Menard warden to accept this moderate offer immediately,” he added.

Share
Copyright, Truthout. May not be reprinted without permission.
James Anderson