A year after the death of Hugo Chávez Frías, we take time to reflect about his life, his virtues and limitations, his public promises, achievements and unfinished work. Chávez was a bold thinker, uncompromising in his goal of constructing a new, just, economically productive Venezuela.

On March 5, 2014, the government of Venezuela and millions of Venezuelan citizens, joined by many thousands around the world, including heads of state, commemorated the first anniversary of the death of Hugo Chávez Frías. We also will take time to reflect about his life, his virtues and limitations, his public promises, achievements, and unfinished work. At the invitation of the Venezuelan people and government, we joined the commemorations in Caracas, will meet with President Nicolas Maduro and Foreign Minister Elías Jaua, and will make a special visit to talk with Afro-Venezuelan communities in Barlovento about their cooperative economic projects.

We met Chávez for the first time in 2003 in Caracas on an invitational visit of the TransAfrica Forum Board, then chaired by Danny and directed by Bill Fletcher Jr., to participate in the inauguration of the Bolivarian Martin Luther King Jr. School in the coastal town of Naiguata, where large numbers of Venezuelans of African descent live. Our visit also coincided with the launch of official recognition of King’s birthday as a national day of celebration in Venezuela.

We became deeply interested and supportive of his vision and projects to manifest a secure national sovereignty and self-determination project that would foster formulation and implementation of profoundly new forms of democratic participation and material development. We bonded with Chávez in mutual interest and determination to confront racism; overcome a lack of education, health care and employment; and support political participation of the masses of impoverished, marginalized, alienated Venezuelans.

TransAfrica has a long history of solidarity with independence and self-determination of the Haitian people, and Chávez was steeped in the history of the Haitian Revolution and the contributions of Haitian government leaders and Haitian fighters and ships that assisted Simon Bolivar’s military mobilization against Spanish colonialism. His appreciation was not just historical. He deeply felt and materially expressed an obligation of Latin America and the Caribbean to fulfill a debt to Haiti for its contribution to Latin American and Caribbean liberation from colonialism. Some years later on another visit, we were called late one night to go the presidential palace to meet with Chávez about support for a delegation sent by exiled Haitian President Jean-Bertrand Aristide. “Danny and James, I trust you,” he said as he inquired what we thought he should do about the request for support from the Haitian activists who had unexpectedly arrived. He immediately had them brought to the palace. He listened patiently and gave instructions to find them housing, employment and support for their Haiti projects.

We came to affectionately refer to Chávez among ourselves as “the Big Man” or “Little Brother” – we were senior in age. He readily avowed his Afro-descendant family roots, often observing “Mother Africa” in “my big lips and curly hair.” He proudly asserted those prominent physical features and social and cultural affinity with Afro-Venezuelans and with Africa and the Diaspora. He made a point in his administration to increase Venezuelan embassies in Africa. He asked us to tour Africa with him as he wanted to strengthen economic and cultural relations. His most spiteful critics gleefully highlighted his African connections in mocking attacks against him and his progressive people-centered development policies.

Chávez worked tirelessly to ensure that the marginalized and disenfranchised in Venezuela and across Latin America and the Caribbean would one day exercise and benefit from the transformative justice and equality that comes through progressive reforms that lead to systemic democratic and economic change. In response, citizens organized and repeatedly invested their votes in support of his leadership. Citizen participation expanded exponentially under Chávez’s Bolivarian Revolution. Millions of citizens came to fervently express patriotism and support for uncompromised national self-determination and sovereignty. Chávez even extended solidarity to US citizens who could not afford heating oil in the winter or count on private profit-driven US energy corporations to be socially responsible and help needy citizens.

While fending off constant criticism and destabilization attempts, he inspired citizens and governments throughout Latin America and the Caribbean to not just criticize and protest poverty; a lack of health care, education and employment; and interference in their internal affairs. He worked with them to become active in the democratic process and democratic institutions to critique and dismantle economic principles and practices that have pitched so many millions into a downward spiral of impoverishment, misery and war, and alienation from civic engagement.

Chávez was a bold thinker and a forceful advocate for justice. Hero worship was not his intent, although he handled in stride super admiration from fellow citizens and citizens and leaders around the world, many of whom idolized him and still do today. Uncompromising in his long-term goal of defeating neoliberalism and constructing a new, just, economically productive Venezuelan socialism, he was proactive in engaging different ideological views and different economic projects. He undertook this work to be a complicated process of mutual solidarity.

His anti-democratic detractors resorted to anti-constitutional measures, a coup and unceasing malicious, untruthful media attacks and economic sabotage. Speaking candidly about Chávez, former US President Jimmy Carter reached the same conclusions as we did from our official participation as observers of Venezuelan presidential elections, visiting voting sites and speaking with pro-Chávez and opposition voters selected by their voting precincts to ensure fairness and transparency in the voting process. Carter offered his objective appraisal of Chávez and the Bolivarian democracy project: “Although we have not agreed with all of the methods followed by his government, we have never doubted Hugo Chávez’s commitment to improving the lives of millions of his fellow countrymen. … Venezuela probably has the most excellent voting system that I have ever known.”

We have no doubts that Chávez would be dismayed but resolute in the face of the unfolding inflammatory protests and violence of the Venezuelan opposition and the expressed strategy to undermine the constitutional achievements and electoral will of the Venezuelan majority. He would want people of honest, fair-minded principle to thoughtfully support, critically evaluate and earnestly improve upon his grand vision and dedicated state assistance in support of proactive citizen-involvement and self-uplift. 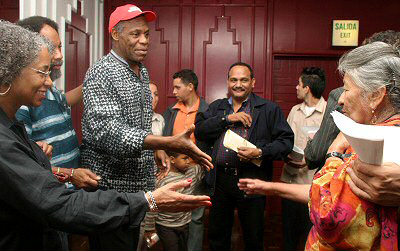 He wasn’t afraid to speak truth to the powerful and to simultaneously organize with the deprived to implement transformative economic, social and political policies that, to date, have saved thousands of lives through free health care and educated millions through universal education. These policies have transformed a region through community-centered development in which empowered citizens have organized through Petro-Caribe oil programs and the new Community of Latin American and Caribbean Nations (CELAC) to defend social justice and economic and democratic gains that Caribbean and Latin American citizens have won during the last decade andthat many in the United States and Africa have benefitted from.

Commemoration of the life and contributions of Hugo Chávez Frías should not be about hero worship or uncritical praise of his unfinished Bolivarian project. There is no question that he set forth a singular profile, but we should not lose sight of the fact that he was a committed social individual, ultimately one among the many Venezuelans and people around the world dedicated to justice, equality, self-determination and sovereignty. Although he was vigorous, at times assertive, in arguing his principles, forthright in challenging his critics and passionate in his polices and collaborations with the poor and marginalized, he did indeed work successfully with people and national leaders often of radically different outlooks and stations in life in Venezuela and the United States and around the world.

We will forever remember Chávez as we do King and Mandela in their bold convictions about justice, in their deep courage against great destructive powers and in their human foibles that nevertheless led social movements and governance policies that inspired and improved the lives of their societies and the world. And we ask you to do so also, but to do so by critically taking up solidarity with the Venezuelan and Latin American and Caribbean peoples and their governments that in memory of Hugo Chávez Frías are still inspired by his leadership and sincerely strive to improve their democracy, their self-determination and sovereignty, and their material and spiritual well-being.

Share
Copyright, Truthout. May not be reprinted without permission.
Danny Glover