The two largest private prison firms in the United States are exploiting a loophole in the tax code to secure millions of dollars in corporate tax breaks.

Corrections Corporation of America (CCA) and GEO Group avoided a combined $113 million in federal income taxes in 2015 alone, according to an analysis of federal financial filings by the racial and economic justice group Enlace.

The prison business is booming despite efforts to reduce the nation’s prison population, which has exploded in recent decades and forced the government to contract with private prison companies to meet demand. Last year, CCA reported $222 million in net profits, and GEO Group reported $139 million.

CCA and GEO Group have enjoyed increased profits per prisoner housed in their facilities since 2012, when both companies began converting themselves into special real estate trusts that are exempt from the federal corporate income tax, at least in the eyes of the IRS.

The conversion has effectively lowered each company’s tax rate by 30 percent or more, according to annual reports submitted to investors and regulators. CCA, which owns 66 jails and prisons nationwide and runs an additional 11 facilities on behalf of the federal and state governments, reported a net income tax benefit of nearly $138 million in 2013 alone.

The massive tax breaks have enraged prison reformers and advocates for communities impacted by incarceration, and they are currently petitioning Congress to remove them.

Federal law requires the bulk of these tax benefits to be paid out to shareholders in dividends, so the benefits do not trickle down to average private prison employees unless they are stockholders themselves. From 2012 to 2015, the average hourly wage for correctional officers at both companies dropped from $16.47 per hour to $15.53, according to an analysis by the watchdog group In the Public Interest (ITPI).

Lower Wages Are Bad for Prison Safety but Good for Profit

Annual salaries for correctional officers at GEO Group and CCA facilities average around $32,000, while their counterparts at publicly run prisons make an average of about $41,000, according to ITPI. One in four officers employed at private prisons make less than $26,091, putting them near or below the poverty line for a family of four.

In comparison, GEO Group CEO George Zoley enjoyed a $1 million salary in 2015 along with $5.6 million in benefits such as bonuses and stock awards, according to ITPI and company reports. CCA CEO Damon Hininger earned an $882,807 salary and $2.5 million in other forms of compensation last year.

Reformers have long argued that for-profit prisons suck taxpayer money out of the criminal legal system that could otherwise pay for alternatives to incarceration, educational programs for prisoners and enhanced training for police and correctional officers. 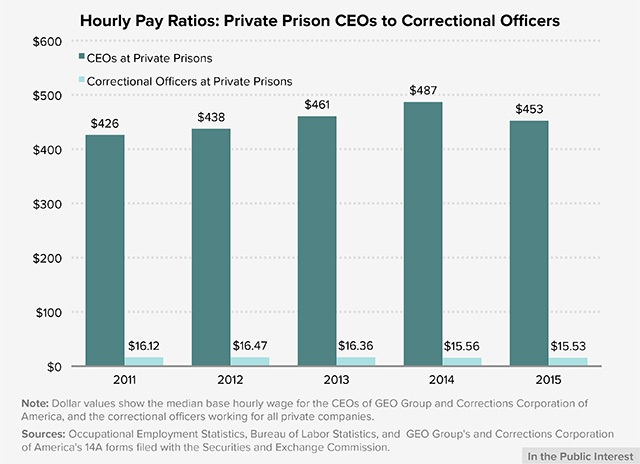 Cohen argues that operating prisons for profit creates incentives to cut corners and provide poor services and living conditions. Indeed, a growing number of medical malpractice cases and several deaths in jails and prisons have been linked to privatization. General safety is also a concern, because private prison firms have been known to reduce staff pay and training.

Last year, CCA lost a government contract and paid $1 million in fines for understaffing at a prison in Idaho that become so violent it earned the nickname “gladiator school,” according to ITPI. After the Lake Erie Correctional Institution in Ohio was privatized in 2011, prisoner-on-prisoner assaults increased by 188 percent, and prisoner-on-staff assaults increased by 306 percent. Little data is available on rates of assaults perpetrated by prison guards against prisoners, but attacks and cover-ups by guards in New York and other states are beginning to attract media attention.

Caging people is itself a violent act, and packing hundreds or thousands of people together in a small space with no escape tends to provoke anxiety and anger, no matter who those people are. So it’s no surprise that prisons suffer from outbreaks of violence from time to time. In their financial reports, prison companies chalk up negative publicity generated by riots and other problems as a cost of doing business, but even violence and disorder can bring in revenue.

A 2015 study found that the average prisoner at private prisons in Mississippi spent an additional two to three months behind bars because private facilities handed out twice as many conduct violations as public facilities. The government typically pays prison companies a daily rate for each prisoner held in a private facility, and holding one prisoner an extra two months costs about $3,000.

Neither CCA nor GEO Group responded to requests for comment from Truthout.

Activists Demand an End to Tax Breaks for Prison Companies

The bulk of CCA and GEO Group’s multibillion-dollar revenue stream comes from taxpayers, but both companies have found a way to avoid paying millions of dollars in income taxes by converting themselves into real estate investment trusts, or “REITs.” Activists say these diverted tax revenues encourage powerful investors to manipulate politicians and shape public policy to favor incarceration.

Established in 1960 by President Dwight Eisenhower, REITs were originally intended to be passive investment vehicles allowing groups of investors to put money into real estate properties without actually buying and servicing them, much like a mutual fund. REITs are required to distribute 90 percent of their taxable income back to shareholders annually in the form of dividends, in cash or stock.

CCA attempted its first REIT conversion in 1997, but the real estate trust defaulted on its debt and nearly sank the company, so the conversion was quickly reversed. Since then, federal legislation and IRS rulings have whittled down the requirements for obtaining REIT status, making it easier for companies like GEO Group and CCA to shed their old corporate skins and convert to REITs. Shareholders, including wealthy employees with stock in the companies, can now benefit from mass incarceration tax-free.

Alex Friedmann, the associate director of the Human Rights Defense Center and managing editor of Prison Legal News, said the idea that CCA and GEO Group are real estate companies is largely based on fiction.

“[It’s] a stretch, but not as great a stretch as claims that private prisons are cost-effective, provide equivalent services as government-run prisons and are accountable to the taxpaying public that funds private prison contracts,” Friedmann told Truthout.

REITs are supposed to only do business in real estate, but the IRS had recently allowed companies to break themselves up in order to meet the requirement, permitting the “real estate investment” portions to forego taxes. CCA and GEO Group, for example, have spun off sections of their companies that provide services such as health care, or have incorporated them as “subsidiaries” of the REIT.

These spin-offs and subsidiaries must pay federal taxes, but both companies have convinced the IRS that the bulk of their business is essentially renting space out to the government to house prisoners, so the majority of their income is now exempt from federal taxes.

The standard federal corporate income tax rate is 35 percent, but CCA enjoyed an effective tax rate of 3.6 percent in 2015, according to financial filings. GEO Group has paid tax rates as low as 9 and 5 percent in recent years, down from 40 percent in 2012.

Activists say CCA and GEO Group should be taxed in full so the revenue can be reinvested in the communities most harmed by mass incarceration. These multimillion-dollar tax benefits encourage politically powerful investors to profit off of mass incarceration and advance the racist political agendas that drive it, according to Enlace.

“We are telling Congress to end the tax breaks for these prison corporations,” said Amanda Aguilar Shank, Enlace’s lead campaign organizer. “It’s inappropriate and shameful to classify them as real estate companies when they are in the business of incarcerating people of color and destroying lives.”

Enlace is organizing a national week of action from April 17 to 23 with the goal of reducing the private prison industry’s lobbying power. Activists plan to pressure the House Joint Committee on Taxation to end REIT tax breaks for prison companies, and will be taking to social media with the hashtags #RevokeREIT and #PrisonDivest.