Here we go again. Hillary touting her long experience in government, claimed knowledge of health care, and ability to “get things done” as she affirms her support of the Affordable Care Act (ACA) and distorts Bernie Sanders’ single-payer plan for national health insurance, Medicare for all.

Yes, health care reform is again center stage as a hot issue during this election season, with rhetoric, disinformation, and false allegations filling the national media – so much smoke and mirrors. But before we give Hillary credit for her credentials in health care, recall how that worked out for her in the 1990s. After huddling with the main corporate stakeholders in our health care system – the private healthinsurance, drug and hospital industries – she brought us a byzantine plan that was poorly conceived, too expensive, too complex, and never got out of committee to a vote in the House. It would have served industry well, but not patients, as Joseph Califano, former Secretary of Health, Education, and Welfare in the Carter administration, said so clearly about its complexity:

Clinton’s plan rests on the belief that an army of policy wonks can predict what would happen under a program that would change one-seventh of the economy, which 30 years of experience tells us we can’t do. (1)

As described in my 2010 book, Hijacked: The Road to Single Payer in the Aftermath of Stolen Health Care Reform (2), the same approach was taken by President Obama in the lead-up to the ACA – make sure that these industries are well taken care of while accepting their claims that costs will be contained and patients will end up better off. Corporate stakeholders, not many millions of patients, however, have been better off. In 2013, three years after the ACA was enacted, health care stocks climbed by almost 40 percent, the highest of any sector in the S&P 500 (3), while a 2014 report found that 32 executives of the nation’s largest for-profit health insurers received a total of $548.4 million in cash and stock options in the previous three years. (4)

Fast forward to today, as Hillary and Bernie duke it out over health care. Bernie’s plan is solid, Medicare for all, national health insurance (NHI) as supported by many studies over the years, including the classic 2013 study by Jerry Friedman, Ph.D., professor of economics at the University of Massachusetts, of its costs and how it will be paid for. To briefly summarize – all Americans will be covered with comprehensive coverage, with full choice of doctor and hospital, anywhere in the country, with 95 percent of individuals, families and employers paying less than they do now. (5) Public financing would be far more efficient with less waste and bureaucracy than with today’s 1,300 private insurers in our multi-payer system. Health care would become based on need instead of ability to pay.

But here comes Hillary, claiming in recent days (as Bernie is climbing in the polls) that NHI would overwhelm the middle class with new taxes and that the ACA will work if we just tweak it around the edges, without offering any substantial reform and disregarding its many flaws nearly six years after its enactment in 2010:

My just-released book, The Human Face of ObamaCare: Promises vs. Reality and What Comes Next, compares the three basic reformalternatives facing us in this election year: (1) continuation of the ACA, with improvements as needed; (2) replacing the ACA with a Republican plan (which has yet to surface); and (3) single-payer NHI. Table 1 displays their comparative features: (10) 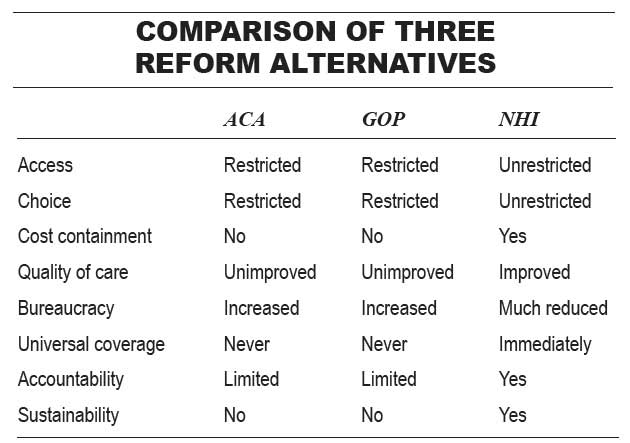 As Hillary will not acknowledge, the ACA is a subsidized bailout for a failing private health insurance industry. The ACA needs more than a few tweaks around the edges to meet its goals of ensuring access to affordable health care. It was never designed to provide universal access, and we need to recognize its failings. If we look at experience since the 1980s and facts on the ground, it becomes obvious that Bernie’s plan needs our full support.

As documented in Michael Corcoran’s excellent piece recently in Truthout, Hillary has received more money from the pharmaceutical industry than any other candidate in either party during the 2016 election cycle, while health care industries have paid her $2.8 million in speaking fees between 2013 and 2015. (11) She clearly has conflicts of interest and is posturing about her commitment to real health carereform. Enough of demagoguery, distortion, and misinformation about health care reform, as are offered by most Republicans, and now byHillary, who should know better. Her health care “plan” went nowhere in the 1990s. Let’s not let it happen again.

Buy The Human Face of Obamacare at Amazon

5. Friedman, J. Funding H. R. 676: The Expanded and Improved Medicare for All Act. How We Can Afford a National Single-Payer HealthPlan. Physicians for a National Health Plan. Chicago, IL. July 31, 2013. Available here.