Washington – U.S. health care spending in 2009 grew at the slowest rate in 50 years, as the recession and high unemployment caused outlays for nearly all medical goods and services to slow or decline, according to a new government report released Wednesday.

Unlike previous recessions, when spending for health services began to slow some two years after an economic downturn, the effect of the Great Recession was swift and profound on insurers, health care providers and patients in both 2008 and 2009. 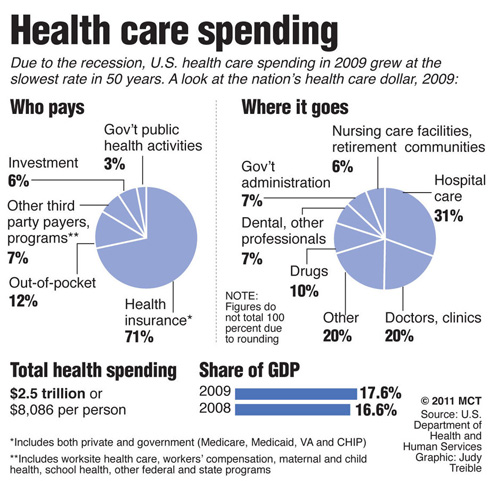 That’s up from $7,845 per person in 2008 when annual health outlays increased only 4.7 percent, which was the second-slowest growth rate in the last half a century, the Department of Health and Human Services reported.

Fueling the spending slowdown in 2009 was a 3.2 percent decline in private health insurance enrollment as 6.3 million people lost job-based health coverage that year. That loss of private coverage also curbed growth in out-of-pocket spending by patients, many of whom delayed medical care because of a lack of cash.

Both trends, in fact, caused spending for dental services to decline in 2009 for the first time ever.

“We had an unemployment rate that was higher than any other recent period,” said Anne Martin, an HHS economist. “That contributed to a large number of people losing their health insurance and having much less income to devote to health care.”

“Many (patients) may not even have credit cards now or they may have a lower limit on them,” Ginsburg said.

Recent surveys have found that 36 percent of patients see their health care providers less frequently and 59 percent went to their primary physician less often, said Aaron Catlin, the deputy director of the National Health Statistics Group at the Centers for Medicare and Medicaid Services.

Despite the spending slowdown, the share of gross domestic product devoted to health care increased to 17.6 percent in 2009, up a record 1 percentage point from 2008. Ginsburg said the one-year jump in the share of GDP is exaggerated because most other segments of the economy were flat in 2009.

Meanwhile, households, private businesses and state and local governments saw their share of U.S. health spending drop by about 1 percentage point each.

Most of the federal spending increase stems from 3.5 million adults and children who lost job-based health insurance in 2009 and enrolled in Medicaid, the state- and federally-funded health insurance plan for low-income Americans.

To help with the increased Medicaid caseload, the stimulus bill boosted federal aid for state Medicaid programs in 2009.

As a result, federal spending for Medicaid jumped 22 percent in 2009, while state Medicaid spending declined 9.8 percent — the largest one-year decline in the program’s history. Total Medicaid program spending reached $374 billion in 2009. That’s up 9 percent compared to 4.9 percent growth in 2008.

Other findings from the report show: