America’s wars are forcing Afghans and Iraqis to flee their homes in greater numbers. According to a recent U.N. High Commission for Refugees study, nearly one half of the world’s refugees are from Afghanistan and Iraq, 3.05 million and 1.68 million, respectively. But neither the United States nor much of the developed world bears the burden of the 10.55 million refugees under the UNHCR’s purview globally. Instead, Pakistan, Iran, and Syria serve as the top host countries. The Economist has charted the numbers: 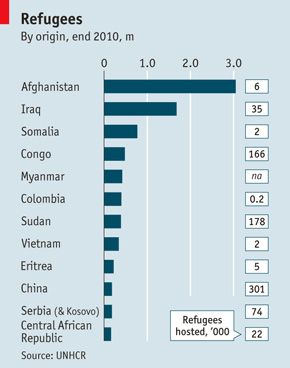