Sharon Wilson, Earthworks’ Gulf Regional Organizer, described FLIR camera footage she shot of a fracking industry site on January 29 in Mansfield, Texas, as ‘the mother lode of all emissions.”

The issue of fugitive emissions — like those documented by Wilson at Summit Midstream Partners Compressor Station on the 29th — is one of the reasons that the Mansfield City Council is struggling with how to handle a request from another oil and gas company, Edge Resources, to renew an expired permit.

Approving the permit renewal would allow Edge Resources to pursue a large fracking industry development in a growing residential neighborhood not far from the Mansfield Performing Fine Arts Center, where fracking industry sites have already caused problems. A growing group of residents do not believe regulators can protect them from the gas industry. 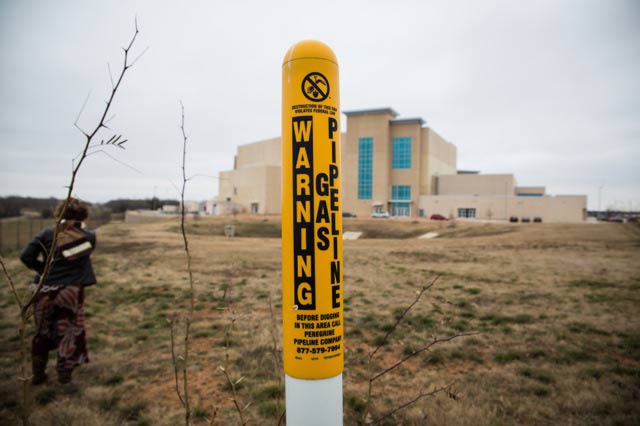 Mansfield, a small conservative city in the southern reaches of the Dallas-Fort Worth metroplex, already has more than 200 active well sites plus over 300 more approved. Some of them are little more than 300 feet from houses in upscale neighborhoods. The region sits atop the Barrnett Shale, one of the nation’s most productive natural gas fields.

Because the city council is in the process of developing new ordinances governing the gas drilling industry, Edge Resources’ timing in trying to renew a permit that expired over a year ago is suspect.

If the permit is renewed before new ordinances are in place, Edge Resources would be exempt from them. The renewed permit would allow construction of an additional 34 wells at a site on Debbie Lane where Edge Resources previously drilled two wells. It would also allow Edge to build other components that are part of the fracking industry including a compressor station.

Members of the Mansfield Gas Well Drilling Awareness Group, a local grassroots organization, have spoken out against the permit renewal at council meetings.

Lance Irwin explains what Edge Resources will be able to do if its expired permit for the site on Debbie Lane is renewed: 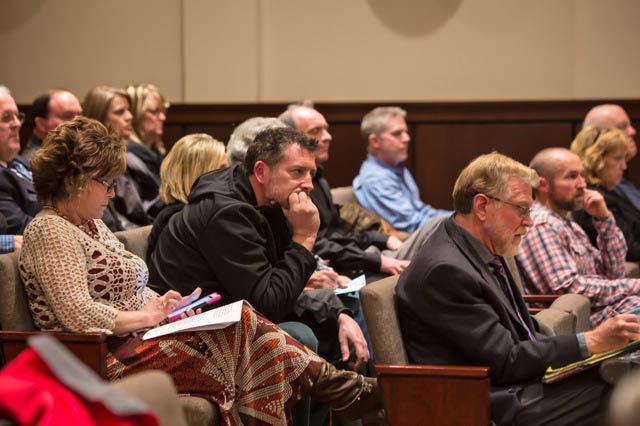 “To reissue the permit now without new ordinances is not appropriate,” Lance Irwin, an art-director/illustrator and one of the founding members of the community group, told DeSmogBlog. Things were different in 2008 when the permit was issued. Less was known about the negative impact of the fracking industry, he contends.

Irwin says the Texas Commission on Environmental Quality (TCEQ) is not protecting Texans from the fracking industry. He argues that a renewed permit should not exempt Edge Resources from any new ordinances the city plans to issue so the city must hold off. He points out that it is bad enough that the company will not have to adhere to any new set back requirernments because of vested rights they have from their original permit.

Air monitoring tests conducted by ShaleTest, an environmental watchdog group, revealed toxic emissions at a drill site next to a playground near Irwin’s home at levels considered dangerous by the TCEQ.

Other worrisome gas industry incidents include foam emitting from one of the sites near the Mansfield Performing Fine Arts Center coating residents cars and yards that local firefighters were called in to check out, and toxic emissions released at an EagleRidge site that were so bad, TCEQ issued a rare violation that Wilson documented on her blog.

On January 26, during a third council meeting to debate the permit renewal, Edge Resources agreed to follow any new ordinances the council might subsequently issue if its permit were renewed, but would not agree to make its promise binding. The council tabled a vote, opting to wait until the city’s new ordinances are completed despite the threat of a potential lawsuit.

While ultimately the city may renew the permit, to say ‘No’ to oil and gas projects in Texas, even on a temporary basis, is notable.

“Without the group’s efforts to shine a spotlight on the situation, the permit renewal could well have been rubber-stamped,” Jim Schermbeck, an anti-fracking activist who has been advising the group, told DeSmogBlog. 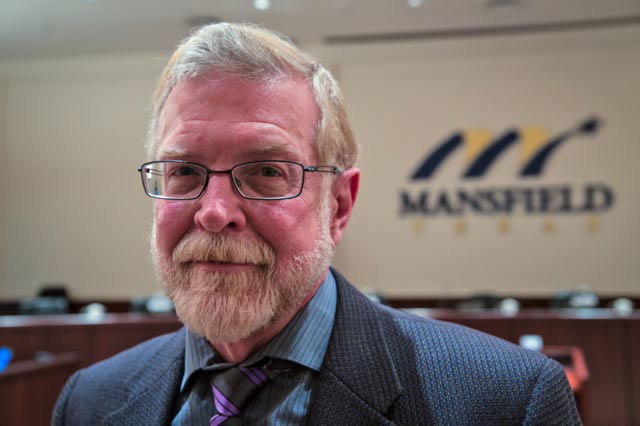 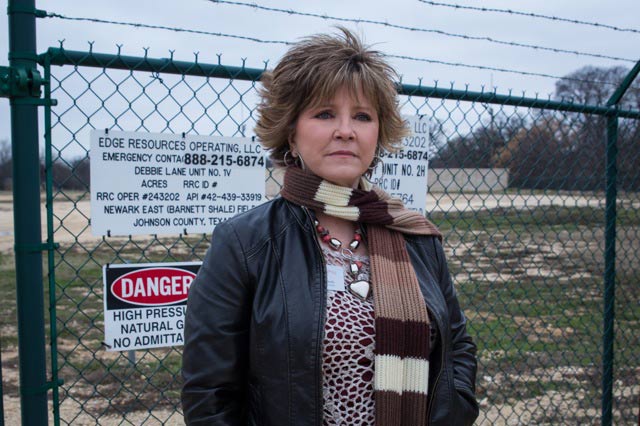 Tamara Bounds at the location on Debbie Lane in Mansfield where Edge Resources plans to expand. (Photo: ©2015 Julie Dermansky)

Like many of her fellow activists, Tamara Bounds, another of the group’s founders, only learned about fracking when it was suddenly happening in her backyard.

“The noise itself is what go me started. I couldn’t sleep. I had to pad my windows at night. I took mattresses off the twin-size beds and put them over my windows,” she told DeSmogBlog.

“We’re not advocating a ban, we’re advocating better regulations,” Bounds continued, taking pains to distinguish the Mansfield group from the Drilling Awareness Group in Denton, Texas that is responsible for passing the first drilling ban in the state last year.

The new ordinances the Mansfield group is backing call for setbacks on new drilling sites no closer than 1500 feet from homes, schools and medical facilities, and a 24-hour air monitoring system for new drilling projects. Similar requirements are contained in ordinances already adhered to by industry in the Texas towns of Flowermound and Southlake.

However, “A 1500-foot setback amounts to a de facto ban,” the Barnett Shale Energy Education Council told The Fort Worth Star-Telegram, pointing out that “it takes at least 200 acres for a site to meet the qualifications to obtain a drilling permit.” 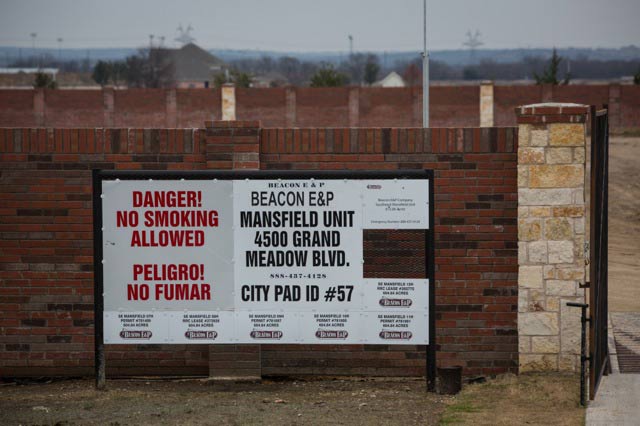 Fracking industry Site in Mansfield next to a housing development. (Photo: ©2015 Julie Dermansky)

Fracking bans in Denton, Texas and parts of Colorado, New Mexico, and California — followed by New York’s statewide ban on fracking set by New York Governor Andrew Cuomo — have sent reverberations through the industry. It is an industry that has experienced unimpeded growth aided by tax incentives and lax regulations since 2008.

Texas Governor-elect Greg Abbott came out swinging against Denton’s ban, calling for an end to the growing “patchwork quilt” of local bans on issues ranging from fracking to the use of plastic bags. He said such bans threaten to turn Texas into California, according to a report by American Statesman.

And in January, a federal judge overturned an oil and gas drilling ban in Mora County, New Mexico declaring it unconstitutional. Politicians in Oklahoma have introduced new bills that would eliminate home-rule to prevent municipalities from banning any facet of the fracking industry.

President Obama’s new Secretary of the Interior, Sally Jewell, called the recent bans on fracking the “wrong way to go,” claiming they are based on a misunderstanding of science. She has yet to cite which scientific evidence she feels is misunderstood.

Though industry continues to downplay the undesirable impacts of the fracking industry, including earthquakes and contaminated air and water, such impacts are by now part of the public discourse. The growing number of groups like the Mansfield Well Awareness Group is a sign of the increasing opposition to the hydraulic fracturing industry nationwide.

Calvin Tillman, former mayor of Dish, Texas, and founder of ShaleTest, thinks the ordinances the Mansfield group supports are very reasonable. He worries that, even if such ordinances are in place by the time Edge Resources gets their permit renewed, some people will remain too close to the site to ensure safety regardless.

The Mansfield City Council has not set a date for finalizing new ordinances for the gas industry. But the Mansfield Well Drilling Awareness Group will not give up its work to curtail the threat of emissions from fracking industry sites too close to home for comfort.