The economy added 321,000 jobs in November, the strongest gain since it added 360,000 in January of 2012. With upward revisions to the prior two months data, the average job gain over the last three months has been 275,000. The household survey showed unemployment unchanged at 5.8 percent, with the employment-to-population ratio (EPOP) also unchanged at 59.2 percent.

The gains were widely spread across sectors. Manufacturing added 28,000 jobs, the largest gain since July of 2012 when a seasonal blip led to a gain of 40,000. (The sector lost 23,000 jobs in August.) Part of this growth is likely anomalous as the plastics and rubber products sector added 7,100 jobs (1.1 percent of total employment), the largest gain since the data showed a 12,000 gain in January of 2007, in the midst of a sharp slide in employment. Retail added 50,200 jobs; this was undoubtedly in part a seasonal story as stores continue to move forward their holiday shopping period.

Professional and technical services added 37,500 jobs, the largest gain since March of 2011. Insurance carriers added 10,100 jobs, an increase that is likely due to the enrollment period in the health care exchanges. Health care added 28,900 jobs, bringing its average over the last four months to 29,500. This is considerably more rapid than its average of 20,000 over the prior year. The bulk of this growth has been in ambulatory health care services. This sector, which is roughly 45 percent of employment in the health care, has accounted for almost 80 percent of the job growth in the industry over the last year. The motion picture industry lost another 5,000 jobs in November. It has continued to lose jobs throughout the recovery, with employment down by 17.4 percent from its level of five years ago.

Other news in the establishment survey was also positive. The average workweek increased by 0.1 hour to 34.6, the longest since May of 2008 and wages reportedly rose by 9 cents. The one-month jump was in large part an anomaly; over the last three months wages have risen at just a 1.8 percent annual rate compared with the prior three months. There is little evidence of any wage acceleration in any major sector. 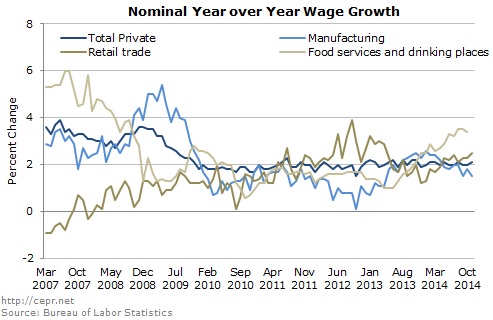 While the overall employment and unemployment numbers changed little in November, there was some positive news in the household survey. The number of people involuntarily employed part time fell by 200,000. It is now almost 900,000 below the year-ago level. By contrast, the number of people voluntarily choosing to work part-time rose by 297,000. It is now more than 1 million higher than the year-ago level. This is almost certainly the result of the Affordable Care Act, which has allowed people to get insurance outside of employment so that many people no longer have to work full-time jobs to get insurance for themselves or their families.

In another positive sign, the percent of the unemployed who had voluntarily quit their job rose to 9.1 percent. This measure of confidence in the labor market is at its highest level in the recovery, albeit well below the 11-12 percent range in the pre-recession period. The median duration of unemployment spells and the share of long-term unemployed both fell to their lowest level in the recovery, although the average duration rose slightly. Black teen employment rate rose to 21.8 percent, the highest since January of 2008, while unemployment fell to 28.1 percent, the lowest since April of 2008.

Overall, this is a very positive report, but it still must be understood in the context of the hole created by the downturn. It would take two and half years at this growth rate to restore demographically adjusted pre-recession levels of the employment to population ratio.