Josh Barro tells us in a recent New York Times article that conservatives are once again touting Canada as a role model, in particular using the country’s experience in the 1990s to claim that austerity is expansionary after all.

I think this qualifies as a “cockroach” idea (“zombie” ideas just keep shambling along, whereas sometimes you think you’ve gotten rid of cockroaches, but they keep coming back). I thought we had disposed of all this four years ago. But nooooo.

Mr. Barro hits the main points in his article. Canadian austerity in the 1990s was offset by a huge positive movement in the trade balance, due to a falling Canadian dollar and raw materials exports. Since we can’t all devalue and move into a trade surplus, this meant that the Canadian story in the ’90s had no relevance at all to the austerity debate of 2010.

Also, the whole debate about austerity versus stimulus was driven by the problem that interest rates were at the zero lower bound, which meant that there wasn’t an easy way to offset the effects of austerity. Canada in the 1990s? Not so much.

However, Mr. Barro misses a trick. When dealing with right-wing claims from people about economic data, not only should you not accept their assertions, you should assume that what they say is probably wrong anyway.

Mr. Barro writes: “Squeezed by high interest rates, a left-of-center government instituted big spending cuts in the 1990s; as a result, Canada’s level of public expenditure as a share of its economy has fallen to match America’s.”

Take a look at the chart on this page with data from the International Monetary Fund. The gap between Canadian and American public spending narrowed during the recession because it was far worse in the United States. 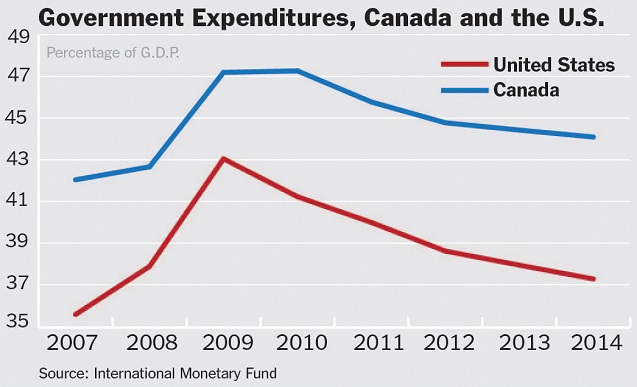 This meant that any given level of spending was larger as a share of gross domestic product, and it also led to a temporary spike in spending in the United States, mainly on unemployment insurance and other safety net programs, but also briefly on stimulus.

But that’s all in the past, and we are once again back to the normal situation in which Canadian spending as a share of G.D.P. is quite a lot higher than ours – including much more spending on poverty reduction.

So conservatives have fallen in love with an imaginary Canada, whose history and current reality is nothing like the real place.