On November 13, over 600 people filled the Lakeshore High School gym for a public hearing on a drilling permit for the first hydraulic fracturing site in St. Tammany Parish, Louisiana.

According to Patrick Courreges, a spokesman for Louisiana Department of Natural Resources (DNR), it was the first public hearing for a drilling permit that anyone can remember.

DNR isn’t used to opposition to drilling permits and rarely rejects such industry requests. But since April when Helis Oil and Gas announced plans to frack in St. Tammany Parish, 45 miles outside of New Orleans, public opposition has grown steadily in an effort to stop the company’s operations before they start. 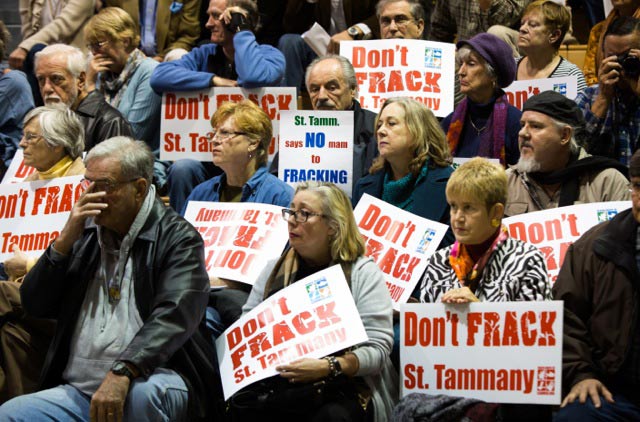 According to Courresges, if Helis proves they can meet DNR’s requirements, they will be issued a permit. Public comment about quality of life concerns won’t suffice to stop it.

“This is pretty much about construction and operation of the well itself, the wellbore and how it will be constructed and operated, not quality of life issues,” Courreges told DeSmogBlog. 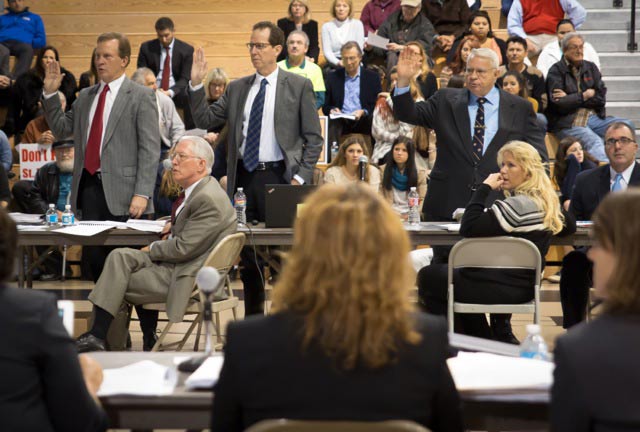 “I’m a firm believer that fracking can be done safely in a way that protects the environment,” testified John Conner, a consulting engineer for Helis Oil.

Fears that chemicals would migrate to water wells or the aquifer are unfounded, he said. “That absolutely can’t happen here.”

Connor claimed Helis would do more to make sure the drilling operation is conducted with a greater concern for safety than is required in Louisiana.

Attorney Lisa Jordan, representing Abita Springs, opened her cross-examination by pointing said out that the binder full of information Helis’ team presented at the hearing was not made available until the meeting, making a proper cross examination impossible. She also questioned the extra measures the Helis team proposed.

“Are you willing to make these extra protective measures part of a legally binding document?” she asked each of the consultants.

Her request brought to light that nobody from Helis was present at the meeting. The consultant admitted he didn’t have the power to speak for the company. 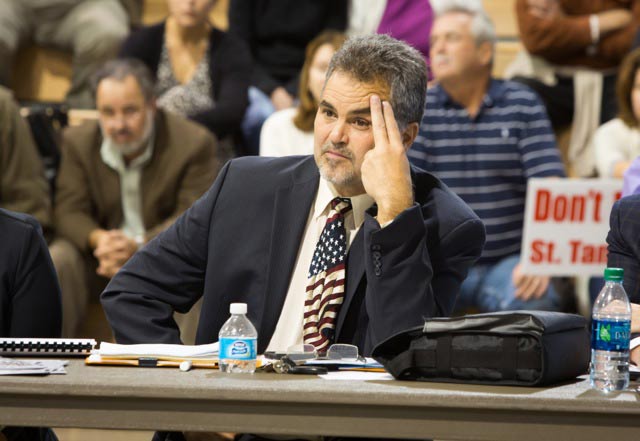 Rick Franzo, president of Concerned Citizens of St. Tammany, was not impressed with the Helis Oil presentation.

“It seems like Helis sent out their ‘B’ team,” Franzo told DeSmogBlog. Then after some more thought, he added, “No. It seems they sent their D team.”

During the hearing, Jordan questioned the consultant’s expertise in the areas they presented testimony on and objected when they spoke on endangered species.

The opposition called geologist Mark Quarles of Global Environmental in Nashville, Tenn. to testify on their behalf. According to Quarles, Helis’ plans fall short of following industry’s best practices and the state’s regulation are “not sufficiently protective.”

About 120 people had signed up to speak, but most left before the public comment portion of the program, which began over four hours after the meeting started.

First up was Abita Springs mayor, Greg Lemons, who said the risk of the project was simply not worth it. “By drilling through a single source aquifer, Helis could destroy the area’s water supply forever.” He pointed out his city has filed a case against DNR to stop the permit, because the area is not zoned for this type of activity. 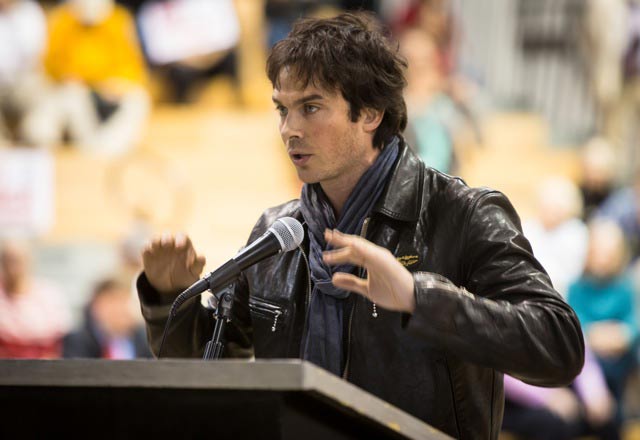 Ian Somerhalder, a celebrity from Covington, takes a stand against fracking at the hearing. ©2014 Julie Dermansky

Ian Somerhalder from Covington, star of the “Vampire Dairies” television show, talked of his love for the area and let the audience know he would use his celebrity to spread the word. “The fracking process does not lend itself to being in an environment that is considered a wetland.” 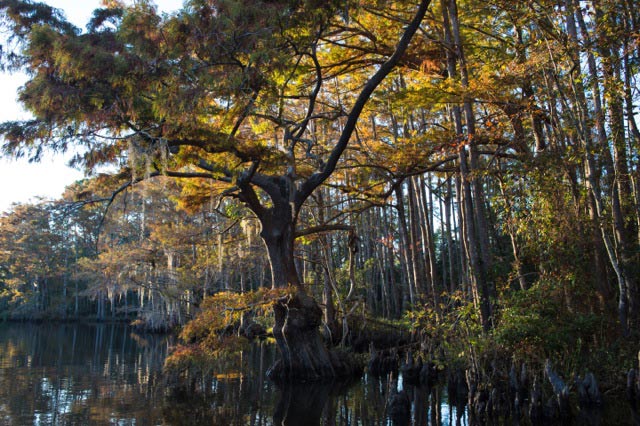 “Please do not overlook the most powerful resource that we have, which is our children,” testified Melissa Pearson, a St. Tammany homeowner. Had she known fracking would be permitted in St. Tammany Parish, she wouldn’t have purchased a house there, she told DNR.

The lawsuit filed by St. Tammany Parish government to block the project pending in state court and the case against DNR filed by the city of Abita Springs will most likely not stop the agency from issuing a verdict on the permit in 30 days. “State law is very clear,” Couregess told DeSmogBlog. “If the Helis permit complies with the rules they will get their permit.”

The Concerned Citizens of St. Tammany Parish and Abita Springs legal counsel believe the law is on their side. The state constitution precedes the state law that the regulatory agency is answering to.

John Herasymiuk, a sculptor with a background in industry left before he got a chance to speak. “It seemed like this DNR hearing was more of an opportunity for Helis to get the misleading PR out to the local news. Their powerpoint presentation was filled with out of scale images that would lead some people to believe that the cement casing that is supposed to protect the aquifer is a foot thick, not less than 2 inches thick,” he told DeSmogBlog. 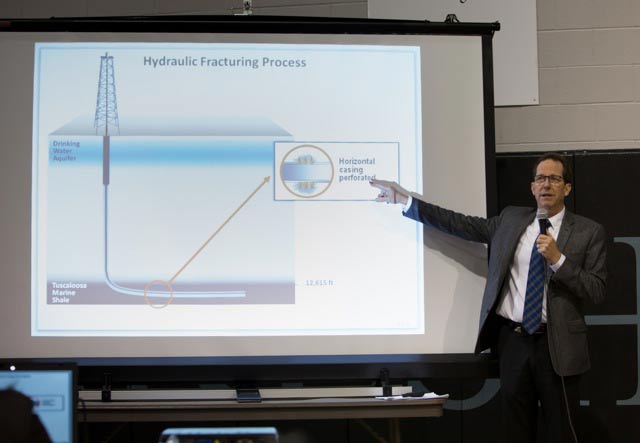 When the meeting broke up after midnight one thing was clear: The fight against fracking in St. Tammany Parish will not stop if DNR grants Helis a drilling permit, it will only intensify.

St. Tammany Parish is the latest community to take up the fight against the fracking industry citing zoning rules, following battles in New York, Ohio, Colorado, and Texas.

“I think this case has precedential value” Jordan Says. If this goes ahead and courts say this is ok to trump zoning, then this could happen anywhere”. 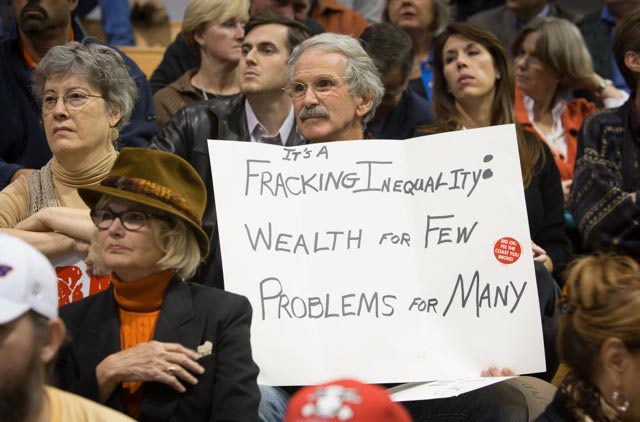 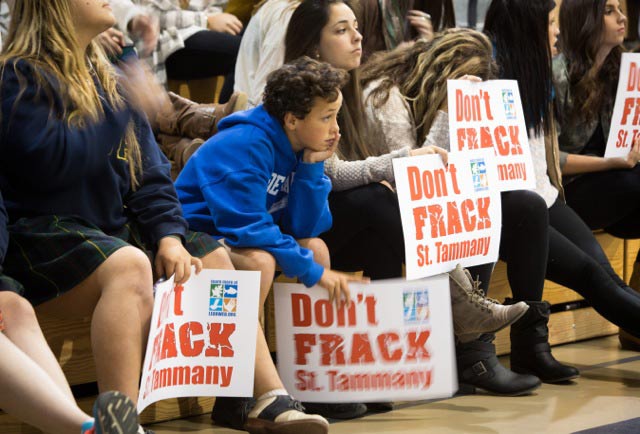