Anti-fascism exists in many different forms, from passive disapproval to militant opposition. In this exclusive interview with Truthout, author and historian Mark Bray explains the role of — and need for — the antifa movement.

Mark Karlin: Fascism is highly connotative. In summary, how do you define it in your book?

Mark Bray: Defining fascism is notoriously difficult because fascists have adopted and discarded ideas and positions more readily than perhaps any other political tendency. Fascism rejects rationality and ideological consistency. It’s not even clear that fascism can be understood as an ideology at all so much as a complex confluence of authoritarian and reactionary tendencies. Especially after World War II when the symbolism, vocabulary and theoretical expanse of far-right politics broadened considerably, it might make more sense to talk about spectrums of the fascistic.

In my book, I include a definition from Robert Paxton’s excellent The Anatomy of Fascism, but like Paxton and many other historians, I hesitate to confine this historical phenomenon to an abstract, analytical definition. “Definable,” Nietzsche argued, “is only that which has no history.” While I may not go that far, I agree with the historian Angelo Tasca that “to understand Fascism we must write its history.” 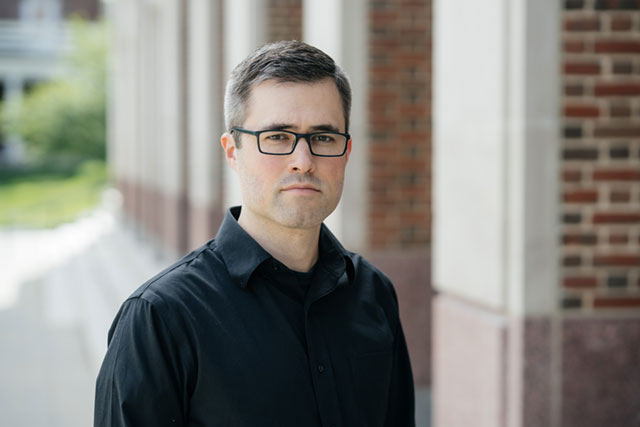 Trump rode a wave of reactionary and fascistic undercurrents into power, and in so doing, exacerbated their expansion in the body politic.

Is Trump a fascist or an enabler of fascism?

There is no evidence to suggest that Trump has ever had any truly fixed political outlook beyond self-aggrandizement. So, no, I wouldn’t say that Trump is a fascist. Nevertheless, he has displayed quite a few fascistic qualities: ultra-nationalism, xenophobia, authoritarianism, misogyny, white supremacy, appeals to extra-legal violence, the development of a cult of personality, opposition to both international free trade and socialistic measures, a populist appeal to (predominantly white) everyday people, and a reactionary desire to turn back the clock to an imagined past glory: Make America Great Again. Even his “America First” slogan came from American Nazis and Klansmen.

But as I said at the outset, this ultra-nationalist Donald Trump came to the fore because he rightly believed that this brand of bombastic, far-right politics would sell. Under different circumstances, he might have chosen to present himself as more of a laissez-faire “globalist,” but the wind wasn’t blowing in that direction. Trump rode a wave of reactionary and fascistic undercurrents into power, and in so doing, exacerbated their expansion in the body politic. Trump was enabled by fascism (among other things) and in turn enabled fascism by creating space to be proudly racist, homophobic or Islamophobic, and by inviting far-right figures like Steve Bannon, Sebastian Gorka and Stephen Miller into the White House.

Do you believe “alt-right” is a legitimate new movement, or is it just a new name for groups that have existed for a long time?

Both. Certainly, Richard Spencer’s motivation in developing the notion of the “alternative right” was to rebrand white supremacist politics so they could go more mainstream. He borrowed elements from European identitarianism and the French New Right in an effort to distance himself and his followers from the off-putting aesthetic of neo-Nazi skinheads or Klan robes and present a more “intellectual” and “respectable” image. Despite shifts in language and imagery, the white supremacist and fascist values underlying the alt-right are not new.

An important goal for anti-fascist and anti-racist organizing has been to tear off the mask of “respectability” to prevent these ideas and groups from being able to expand. A lot of progress was made in this direction in the months after Charlottesville when mainstream commentators were forced to acknowledge that “alt-right” was basically code for “Nazi.”

At its core, anti-fascism is self-defense.

That having been said, I was influenced by the argument put forward by Matthew N. Lyons in the Three Way Fight blog that it is important to be attuned to changes in far-right self-presentation and never assume that fascist politics (or any other politics) never change. In my chapter “Five Historical Lessons for Anti-Fascists,” I argue that interwar anti-fascists failed to recognize the degree to which fascism represented a new threat — something far more menacing than traditional counter-revolutionary politics.

Anti-fascist strategy cannot afford to assume that the far-right is eternally static. That’s why I think that although the “alt-right” is essentially just a mask for Nazis and Klansmen, political imagery and propaganda must be taken seriously.

In what context historically was the term “antifa” formed?

Antifa is short for anti-fascist in a variety of languages, but it seems like the use of that term originated in Germany during the interwar period and was revived again in Germany in the 1980s with the creation of the Autonome Antifa. According to Merriam-Webster, the term first appeared in English in 1930 in an article about anti-fascist organizing in Germany. Subsequently, the term became useful as a way for militant anti-fascists to share a sense of identity and unity across linguistic and cultural lines. Sustained use of the term by militant anti-fascists in the United States started with the 2007 formation of Rose City Antifa in Portland, Oregon, and the subsequent creation of NYC Antifa, Philly Antifa and others.

How are those persons involved in the antifa movement distinguished from those who perceive themselves as simply anti-fascists?

This tendency crystalized as a distinct position after World War II when most continental European socialist and communist parties advocated stopping a far-right resurgence by passing laws against Nazi or fascist politics. By the ’80s and ’90s, it was clear to many that organized self-defense and militant resistance were necessary to stem a rising ultra-nationalist, racist tide. The lineage of militant anti-fascism in Great Britain is more continuous because the British government allowed more space for the far-right to organize after the war, thereby giving anti-fascists far more reason to mobilize.

The vast majority of anti-fascist actions entail no physical confrontation at all, but the media focus on the spectacular exceptions to the rule.

The direct-action strategies and social revolutionary politics of militant anti-fascists, or antifa, distinguish them from those anti-fascists who turn to the state to make the far right illegal or simply aim to defend parliamentary government. These kinds of distinctions are not always crystal clear in practice, and around the world, many derive their antifa identity from their football fandom or subcultural music scene, but these differences help to delineate this specific tendency.

Can you elaborate on the more aggressive approach to challenging the white supremacist?

At its core, anti-fascism is self-defense. Without the aggression of Black Shirts in Italy and Brown Shirts in Germany, there would have been no anti-fascism. The leftists who mobilized around the banner of anti-fascism in the ’20s, ’30s and ’40s, as well as those who again picked up the torch after 1945, did so reluctantly. For most, it was not even a choice, but a necessity for self-preservation as migrant communities came under attack, punk and alternative scenes were threatened by white power skinheads, and football games became breeding grounds for racism.

The centrality of self-defense can never be forgotten when we discuss “aggressive” responses to fascism. Fascism is inherently aggression, inherently violence, inherently death. Anti-fascists argue that fighting back is always self-defense, even if they strike the first blow. After the historical legacies of colonialism, slavery and genocide and the unfortunately numerous examples of neo-Nazi murders in recent years, anti-fascists refuse to grant fascists the benefit of the “doubt” that their organizing will not result in physical violence. They do not ask if it will happen — they prepare for when it will happen. Rather than waiting for fascists to show up at an immigrant’s door with baseball bats and knives, they commit themselves to shutting down far-right organizing by any means necessary.

Sometimes that entails physically shutting down a Klan rally, but the media miss the fact that such confrontation is often the last resort after efforts have been made behind the scenes to dox fascist leaders, pressure their bosses to fire them and their neighbors to disown them, encourage venues to cancel their events and web servers to shut down their websites. The vast majority of anti-fascist actions entail no physical confrontation at all, but the media focus on the spectacular exceptions to the rule.

If the legacy of interwar Europe was that not enough people stood up to fascism and Nazism early on while it was still possible, then how bad does it have to get — how many have to die — before we resolutely declare that they shall not pass?