For many high school seniors, April is the month for tough decisions about colleges and universities — and how to cover their enormous tuitions. College tuition has been increasing far more quickly than household median income in recent years, and ProPublica reported last week that student fees — in addition to the tuition — are on the rise. These fees cover non-academic programs ranging from counseling services to late library hours to sidewalk maintenance. Some public universities use fees as a way to substantially raise tuition without actually increasing the figure on students’ bills labeled “tuition.” Mandatory “fees” at the University of Massachusetts — where tuition has remained flat by order of the state school board — are more expensive than the cost of tuition. 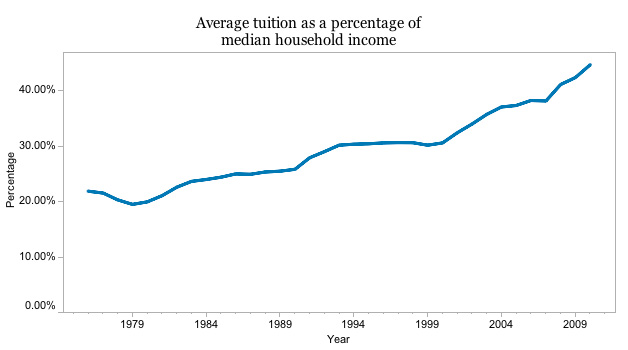 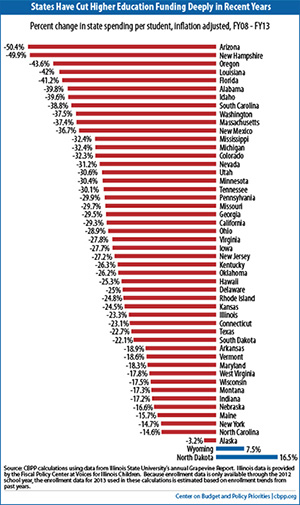 This comes at a time when states are cutting higher education funding. An analysis by the Center on Budget and Policy Priorities (CBPP) found that, since the start of the recession, all but two states have decreased funding for higher education by thousands of dollars per student. Twenty-eight states have cut funding by more than a quarter. And as the sequester takes hold, state colleges and universities will see further decreases in funding. Public colleges and universities across the country receive 53 percent of their funding from state and local governments. When that funding decreases, schools either raise tuition or cut services to make up for it. The CBPP found that, in recent years, public institutions have done both.

These cuts also come at a time when well-paying jobs that could help students pay back their loans are increasingly hard to find. The Wall Street Journal recently highlighted data from the Labor Department reporting that 284,000 graduates with bachelors degrees were working minimum-wage jobs in 2012. The figure peaked at 327,000 in 2010. It has declined since then, but it’s still twice what it was in 2007 and 70 percent higher than it was ten years ago.

Studies by the National Employment Law Project have found that middle-wage jobs took the hardest hit during the Great Recession and those jobs have not come back during the recovery. In fact, low-wage jobs have rebounded 2.7 times as quickly as middle- and high-wage jobs. If this trend continues, students entering college this year will be less able to contribute to the economy than in years past, and less able to deal with the debt burden that comes with a college education. 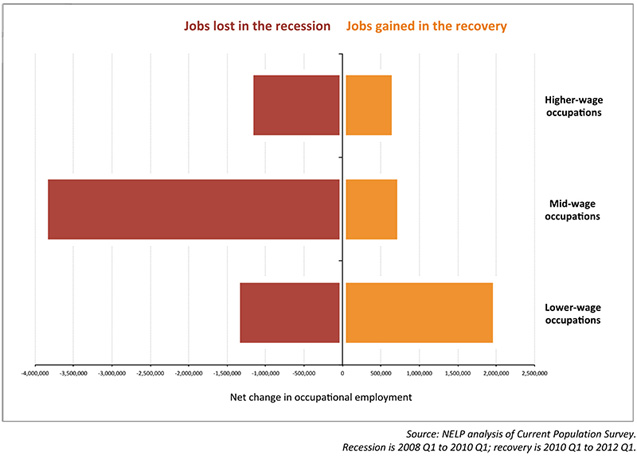 A quick message before you keep reading

We’re proud to publish real news 365 days of the year, completely free of charge to our readers. But producing high-quality, independent work is not cost-free – we rely heavily on your support.

If you found the piece above useful, informative, or inspiring, please consider supporting Truthout with a monthly donation. A gift of any size makes a difference and helps keep this unique platform alive.