On the 39th anniversary of the Hyde Amendment – a prohibition on federal funding for abortion care that disproportionately discriminates against people of color and low-income people – reproductive justice activism to end coverage bans has built into a groundswell.

In a season where citizens around the world are joining together to demand repeals of bans and clear decriminalization of abortion, more than 20 million people in the United States are denied care under the Hyde Amendment. They include Peace Corps volunteers, US military personnel, residents of the District of Columbia, federal prisoners, and those whose insurance provider is Medicaid, the Indian Health Service or the State Children’s Health Insurance Program (available to teenagers from low-income families through age 19).

Hyde being introduced into the budget and signed every year by legislators and presidents of both parties didn’t prevent ideologically driven Republican lawmakers from threatening this summer for the second time in three years to shut down the government unless the 0.00001136 percent of the $3.8 trillion federal budget that goes to Planned Parenthood could be eliminated. In addition to the federal ban that makes such attempts to defund Planned Parenthood a fight over phantom abortion money, 25 states also have insurance bans that include some or all private plans and 10 states prohibit any insurance company from even offering abortion coverage to any customer.

These coverage bans, when combined with the 287 new legal restrictions on access to abortion care since 2011, have led to one in four unintended pregnancies among low-income Americans being carried to term against that person’s will.

“Politicians shouldn’t be able to deny abortion coverage to a woman just because she doesn’t have the income to afford it.”

As if all of that weren’t enough, Congress is still attempting to pass sweeping national bans that further restrict care. The week before the annual September 28 Global Day of Action for Access to Safe and Legal Abortion, with over 10,000 people in Ireland gearing up to march for the repeal of the country’s Eighth Amendment (which criminalized abortion in 1983), US legislators were attempting to turn the clock back. The 20-week ban that passed the House earlier in the legislative term was narrowly defeated in the Senate. Meanwhile, only 54 senators were willing to go on the record in opposition to the ban in order to protect a constitutional right that recognizes the privacy and bodily autonomy of pregnant people. 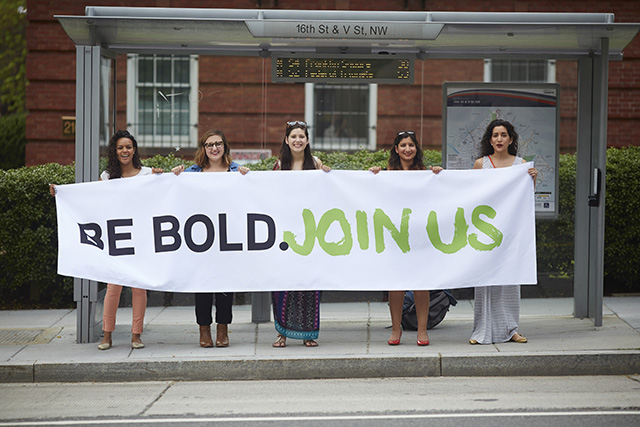 The “Be Bold” banner made on production day being held at a bus stop. (Photo: All* Above All)

The activists whose work culminated in a historic moment this summer with the introduction of the Equal Access to Abortion Coverage in Health Insurance Act (#4EACHOfUs) certainly haven’t been off celebrating the Hyde anniversary. But they are observing it, with the #BeBoldEndHyde campaign to “make Hyde history.”

The author of the amendment, Rep. Henry Hyde (R-Illinois), was certainly upfront about his motivation in 1977. “I certainly would like to prevent, if I could legally, anybody having an abortion, a rich woman, a middle-class woman or a poor woman,” Hyde said. “Unfortunately, the only vehicle available is the … Medicaid bill.”

Activists united under the All* Above All coalition, which includes 44 national and 49 state and regionally focused organizations, are being just as unapologetic in their campaign to push back on stigma, recognize abortion as a fundamental human right and repeal coverage bans.

Their video, released on September 30, declares, “We seek justice and will keep on fighting till history proves us right.”

As they recorded messages, worked together to create banners and posed for group photos, while cheering on each other and their goals, participants were asked why they got involved with the movement to repeal coverage bans.

“I’m in this movie for my sisters and siblings in the movement, particularly queer and trans women who are often kept out of these conversations,” Erik Lampmann said.

“As a trans woman, I strongly believe in bodily autonomy and self determination,” Cifredo said. “I also recognize that the same system that denies trans Latinas like me access to hormone treatments or gender-affirming surgeries is the same system that denies my cisgender hermanas access to contraception and abortions. This is why I agreed to participate in the video, because I cannot expect others to fight for my bodily autonomy; si no lucho por los de ellos.” 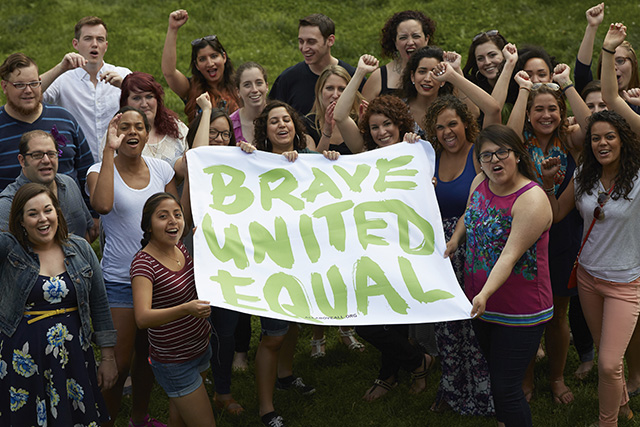 The video participants cheering together with the sign they made of All* Above All’s slogan: “Brave United Equal.” (Photo: All* Above All)

Organizations representing researchers and developers of new medical services – such as treatments for infertility or new medications to terminate early first-trimester pregnancies – have watched as these services have been gradually criminalized and/or placed out of reach of many Americans. With attacks specifically against medication abortion and telemedicine, which allows patients in areas without abortion providers to adhere to required counseling provisions when there isn’t a local provider, these groups are joining the fight as well.

“I’m with All* Above All because politicians shouldn’t be able to deny abortion coverage to a woman just because she doesn’t have the income to afford it; a right without access is no right at all,” said Dee Srivastava, programs and policy assistant for Reproductive Health Technologies Project.

Activists also talked about family members who took friends to their appointments and even paid for their abortions – both before and after Roe v. Wade decriminalized the procedure.

“I’m here today for my mother, who has taken three friends to get abortions and paid for all of them,” Ariel Tazkargy said.

Some declared proudly that they were participating for their own rights; others, like Annie Cromwell, referenced everyone’s need for access. “I support All* Above All because I support the individuals who need access to safe abortion care despite their income bracket,” said Cromwell – and she’s not alone.

Voters support public funding for those who need it by a 24-point margin. According to polling done by Hart Research Associates this spring ahead of the Equal Access to Abortion Coverage in Health Insurance Act announcement on behalf of All* Above All coalition members, 59 percent of voters align with the statement: “However we feel about abortion, politicians should not be allowed to deny a woman insurance coverage for it just because she is poor.” 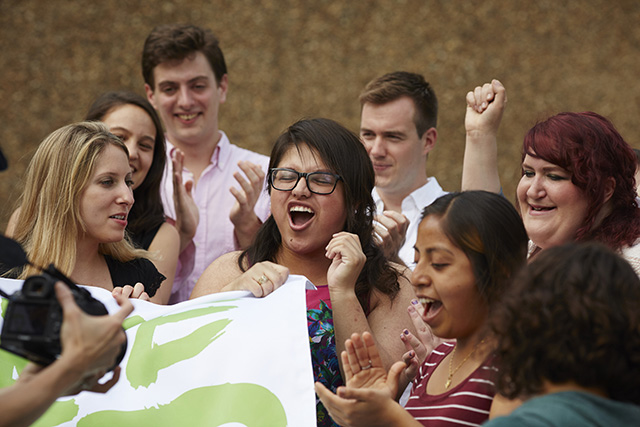 Participants cheer for the cameras at the end of a successful production day. (Photo: All* Above All)

When phrased that way – as a privacy issue, asking whether the government should tell patients what to do (as opposed to asking what survey participants might hope or want patients to do) – people largely say that they want legislators to stay out of it. Roughly 74 percent of voters – including 62 percent of Republicans – actually go further if you inch the scenario toward greater equality. Three in four Americans agree that “as long as abortion is legal, the amount of money a woman has or does not have should not prevent her from being able to have an abortion.”

Americans have come to a consensus that seems to elude our legislators. Even amid the expensive, years-long campaign by the front group the Center for Medical Progress (CMP) to smear the nation’s most recognizable reproductive health-care provider, Planned Parenthood is still officially the most popular entity that NBC News/Wall Street Journal polling tracks. Despite over 65 percent of respondents being familiar with the heavily edited CMP videos, Planned Parenthood’s 47 percent positive rating beats out all the presidential candidates as well as the current occupant of the Oval Office. Only Vice President Joe Biden is within single-digit reach with a favorability rating of 40 percent.

Participant Christina Cherel made it clear how full-spectrum reproductive health care can remain contentious and yet overwhelmingly considered necessary: by generations of women passing down the family value of caring for one another.

“I’m here with All* Above All today in honor of my mother, grandmother and sister,” Cherel said, “and because all women should be able to make the health-care decision that’s right for them, regardless of their ability to pay.”

Share
Copyright, Truthout. May not be reprinted without permission.
Katie Klabusich