Unification of the Tea Party and Occupy movements for a common goal – a Voters' Rights Amendment – will re-establish the United States as a democratic republic and will restore control of its government to the voters. The sort of cooperation I will suggest here is possible only to the extent that there is not more opinion-manufacturing or co-optation by political parties or private interests.

Although the corporate and wealthy elite is doing everything in its power – primarily through its mouthpiece, the mainstream media – to convince Occupiers and Tea Partiers that each is an enemy of the other, it is becoming increasingly clear that the two groups have much in common.

Not only do both groups march under the “Don't Tread on Me” flag, they both very strongly believe that corporations should not enjoy the constitutional rights of individuals, regardless of what the US Supreme Court may have ruled. Moreover, both groups believe that their government ignores their most critical concerns, including jobs, personal freedom, and the health, nutrition and well-being of their families, as their elected representatives feed at the trough slopped by the corporate and wealthy elite. 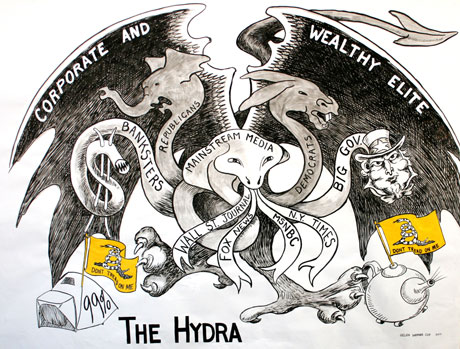 The time is ripe for an open consideration of unity between the two groups. The extensive media coverage amounting to the propaganda-style coverage and pandering of the Tea Party's far smaller demonstrations has given way to acknowledgment of the Occupy movement in the face of police brutality and that movement's staying power.

Support for the Tea Party is lagging with the nonaligned public, as it is increasingly evident that the populist movement has been and is being manipulated by Republican operatives. At the same time, the Occupiers are fighting off attempts by establishment progressives to co-opt their movement.

It is essential that both groups identify their common interests and take collective actions to unify their efforts, instead of attacking each other over other issues about which they may have an honest difference of opinion. Uniting with the increasingly large block of independent voters, Tea Partiers and Occupiers will organize a more effective defense of both of their basic principles, rather than those offered by either the Republican or Democratic party, both of which subvert the rights and interests of workers and small-business owners in favor of wealthy donors and corporate supporters.

The most basic issue that Occupiers and Tea Partiers may perhaps readily agree upon is a Voters' Rights Amendment to the Constitution that ensures that the future of the United States is decided by its voters rather than by the corporate and wealthy elite, which currently manipulates and controls the voters' representatives. The Voters' Rights Amendment provides that only natural persons are protected by the Constitution, establishes a national paid voters' holiday and calls for a national paper ballot, which includes a national policy referendum on critical policy questions and an alternative write-in vote.

Only natural persons shall be protected by this Constitution and entitled to the rights and freedoms it guarantees, including the freedoms of religion, speech, assembly, petition and privacy.

Prior to the end of the calendar year preceding a presidential election, Congress shall adopt a joint resolution setting forth the 12 most critical policy questions that should be addressed by the next president and Congress.

Failure of Congress to adopt a joint resolution prior to the end of the calendar year shall result in the disqualification of all sitting members of Congress to be eligible for re-election.

Federal elections conducted every second year for senators and representatives shall be held on a national voters' holiday, with full pay for all voters who cast a ballot.

Federal elections shall be conducted on uniform, hand-countable paper ballots and, for the presidential election, ballots shall include the 12 most critical policy questions identified by Congress, each to be answered yes or no by voters.

Paper ballots shall provide space for voters to handwrite in their choice for all elective federal offices, if they choose, and all such votes shall be counted.

In balancing the public benefit of maximum voter participation with the prevention of voting fraud, Congress and the states shall not impose any restriction on voting by citizens except for the most compelling reasons.

The Congress shall have power to enforce this article by appropriate legislation.

This article shall become operative once it has been ratified as an amendment to the Constitution by conventions in the several states as provided in the Constitution, within seven years from the date of the submission hereof to the states by the Congress.

‘The Hydra’ was illustrated by Helen Werner Cox, who was trained as a classical painter at Boston University. She is a retired nationally certified library media teacher who has made extensive use of art in her literacy programs. Her artwork is catalogued at HelenWernerCox.com and she can be contacted via email.