At the Tufts Medical Center in Boston, 1,200 nurses recently walked off the job, initiating “the largest nurses’ strike in Massachusetts’s history and the first in Boston for 31 years.”

In New York, lawyers representing farmworkers recently argued in the State Supreme Court that they have a constitutional right to organize.

In the Pacific Northwest, indigenous Oaxacan farm workers have organized the “first new farm worker union in the U.S. in a quarter century.”

In New York City, Fast Food Justice, a new nonprofit, will advocate for fast-food workers on issues affecting members, although they will be forbidden to undertake bargaining wage levels directly with employers.

And in the South, “workers involved in the Southern Workers Assembly are … focused on building a network of smaller minority unions that lack collective bargaining to create a groundswell of union support.”

These encouraging and varying actions to organize workers could portend resurgence in the labor movement in this country — or they may be the final act in the slow death of unions.

Glimmers of hope are matched and sometimes overshadowed by defeats, as when the United Auto Workers union lost a unionization vote last week at the Nissan car plant in Canton, Mississippi by 62 to 38 percent vote. A victory could have led to a revitalization of organizing in the South. Instead, the union’s lack of influence among Southern auto workers serves to reduce its bargaining power to stop plant closings in Detroit and other manufacturing centers.

The future of unions is precarious. Union membership has been in steady decline. The stridently anti-union stance of the Trump administration, Congressional Republicans and state government Republicans, as well as a hostile Supreme Court, pose a substantive threat to union existence.

Despite his rhetoric during the presidential campaign, Donald Trump’s administration has moved to reverse several pro-labor actions taken by the Obama administration. His proposed budget will decrease funding for the National Labor Relations Board (NLRB, an institution intended to protect workers from employers, and his expected appointment of Republicans to the two vacant seats on the NLRB will likely result in the reversal of various pro-union rulings, including those holding companies responsible for labor violations committed by contractors and franchisees, making it easier for relatively small groups of workers within a company to form a union, and granting graduate students at private universities a federally protected right to unionize.

The Department of Labor is rescinding the “persuader rule” which previously required contractors to disclose if they had hired a consultant to “persuade” employees against joining together in union. And Congress is discussing three anti-union bills: The Workforce Democracy and Fairness Act, The Employee Privacy Protection Act and The Employee Rights Act.

Right-to-work laws now exist in twenty-eight states, including Wisconsin, Missouri, Kentucky, Iowa, and Michigan, once the heartland of American labor. In right-to-work states, workers who are not union members are not required to pay union dues or their equivalent, although they benefit from collective bargaining agreements reached on behalf of all workers in a specific sector. The huge financial burdens placed on unions as a result threaten to undermine their financial viability.

The death of Antonin Scalia forestalled an unfavorable Supreme Court decision that could have doomed unions in the case Friedrichs v. California Teachers Association. With the addition of Neil Gorsuch to the Supreme Court and the pending hearing of a similar case — Janus v. AFSCME — the Court may rule against unions in its next session. A ruling against labor will have the same effect nationwide for public sector workers as right-to-work laws have at the state level.

Resisting this threat, unions need to recognize the changing composition of their membership. Whereas union membership was formerly predominantly male, white, and concentrated in the private sector, especially in the transportation, construction, and manufacturing sectors, it is now increasingly female, disproportionately black, and has gained membership only in the education and health sectors, while declining substantially in the transportation and manufacturing sectors. Union membership in the government sector is now almost equal to that in the private sector. 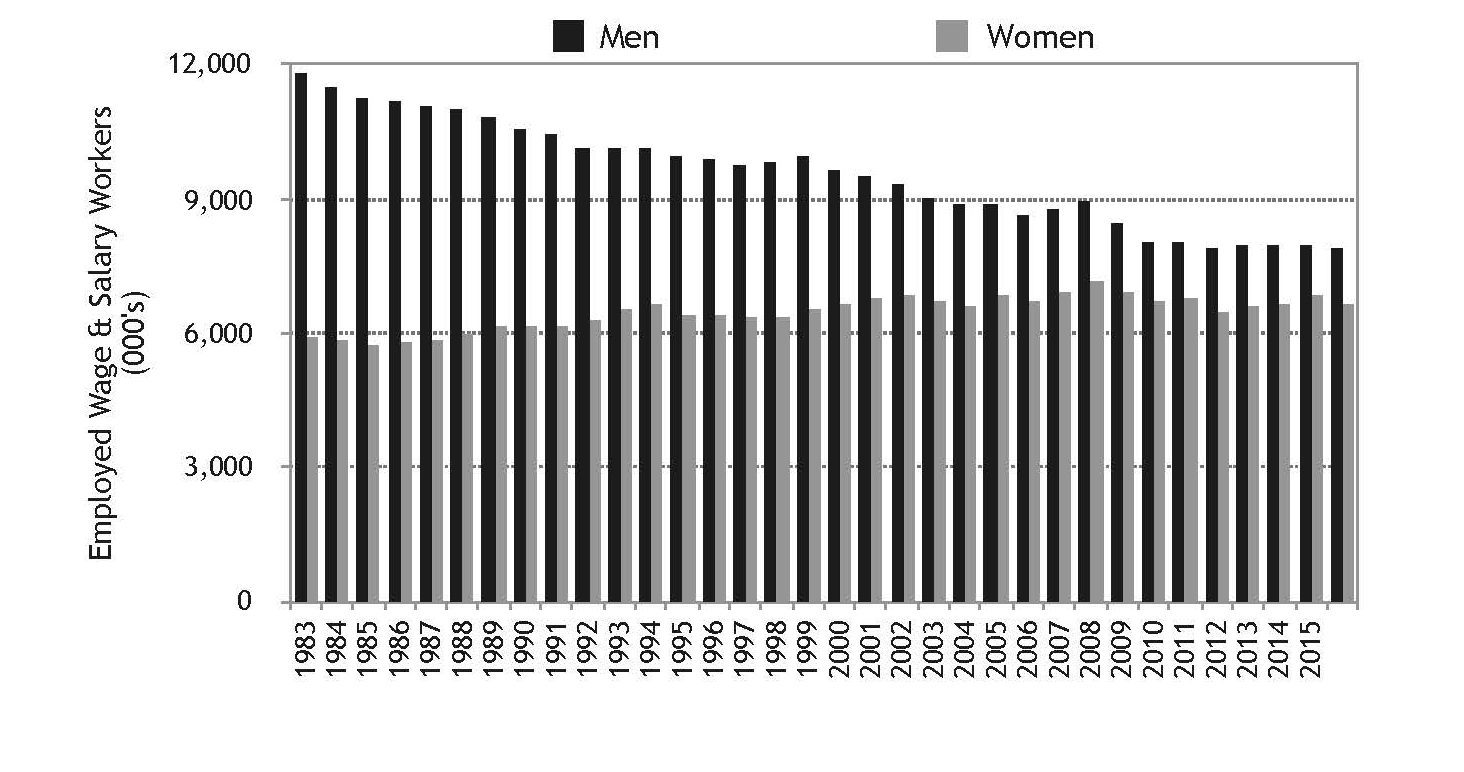 Although the percentage of unionized workers has decreased for all racial and ethnic groups, black unionization rates are proportionately higher than for whites, Hispanics, or Asians. In 2000, about 17 percent of all employed black wage and salary workers were union members; by 2016, it had fallen to 13 percent. By contrast, only 13 percent of white wage and salary workers were unionized in 2000; in 2016, the percentage had fallen to 10.5 percent. 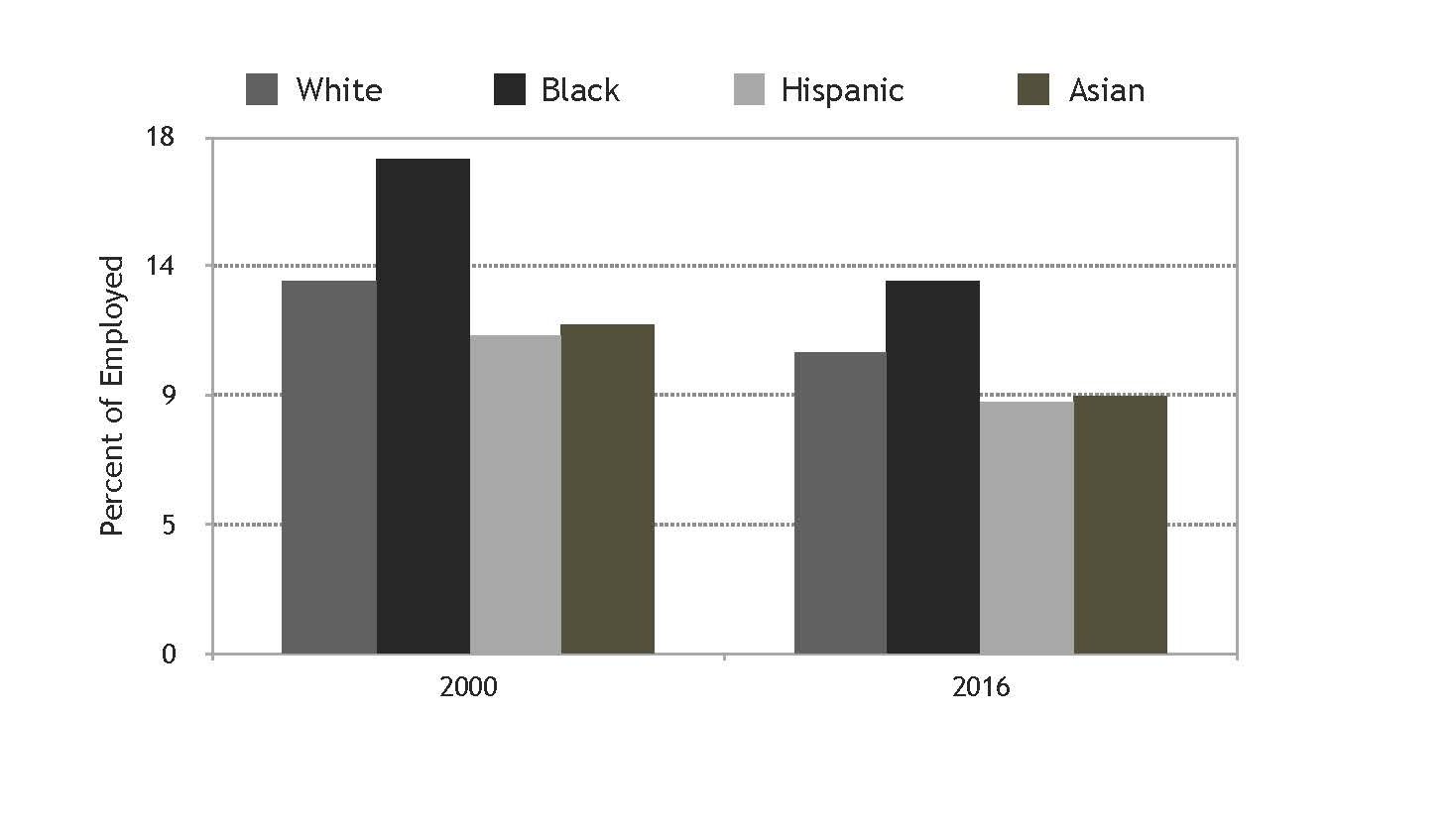 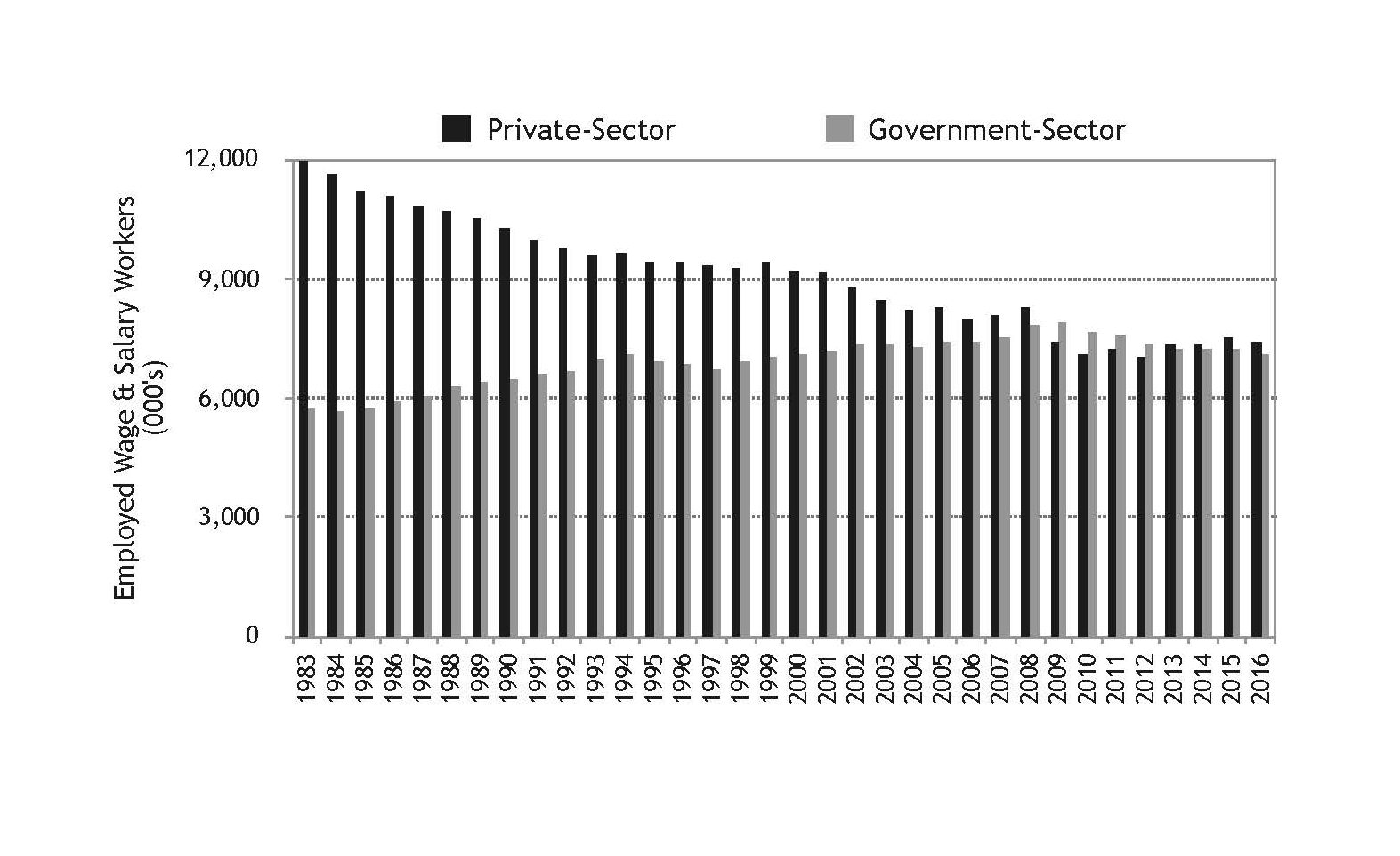 Among the industrial sectors with higher rates of unionization, membership is still primarily concentrated in transportation, construction, and manufacturing. However, their share of union members declined considerably between 2000 and 2016: in the transportation sector from 26.0 percent to 18.9 percent, in construction from 17.5 percent to 13.9 percent, and in manufacturing from 14.9 percent to 8.8 percent. Although much smaller, membership has fallen slightly in the wholesale and retail sector — from 5.9 percent to 4.2 percent — and in the leisure sector — from 3.8 percent to 3.0 percent. By contrast, union membership has risen slightly in the education and health sectors — from 7.9 percent to 8.2 percent. 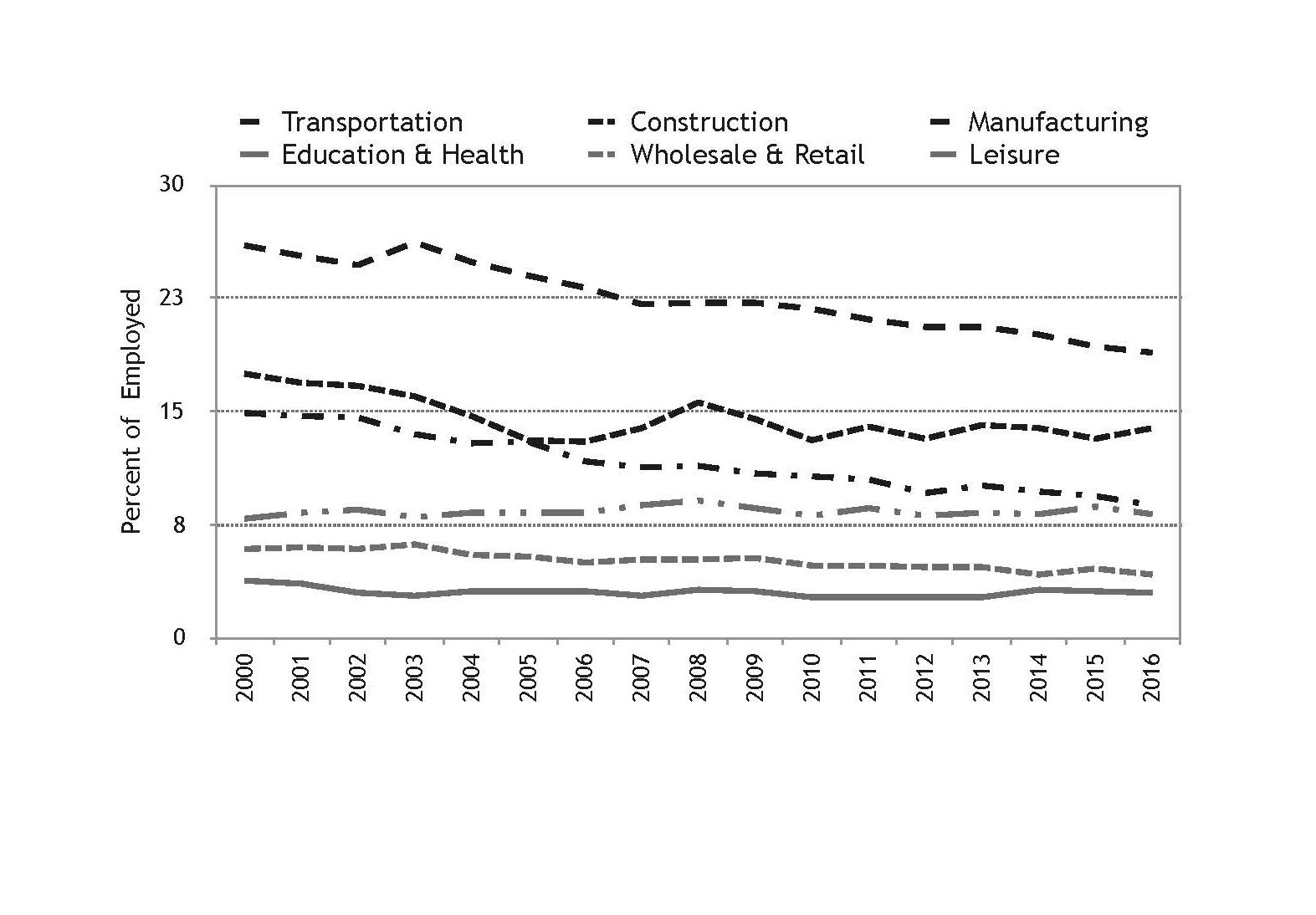 Many of the benefits workers have gained going back to the late 19th century (“eight hours for work, eight hours for sleep, eight hours for what we will”), including unemployment insurance, workers’ compensation, health and safety laws, child labor laws, health and retirement benefits, and others, are a result of the long history of union activity. Unions continue to be a pivotal bulwark against further deterioration in working conditions. Additional threats to unions will further corrode economic security of working people.

The evidence demonstrating the successful achievements of unions is clear. For example, research shows: 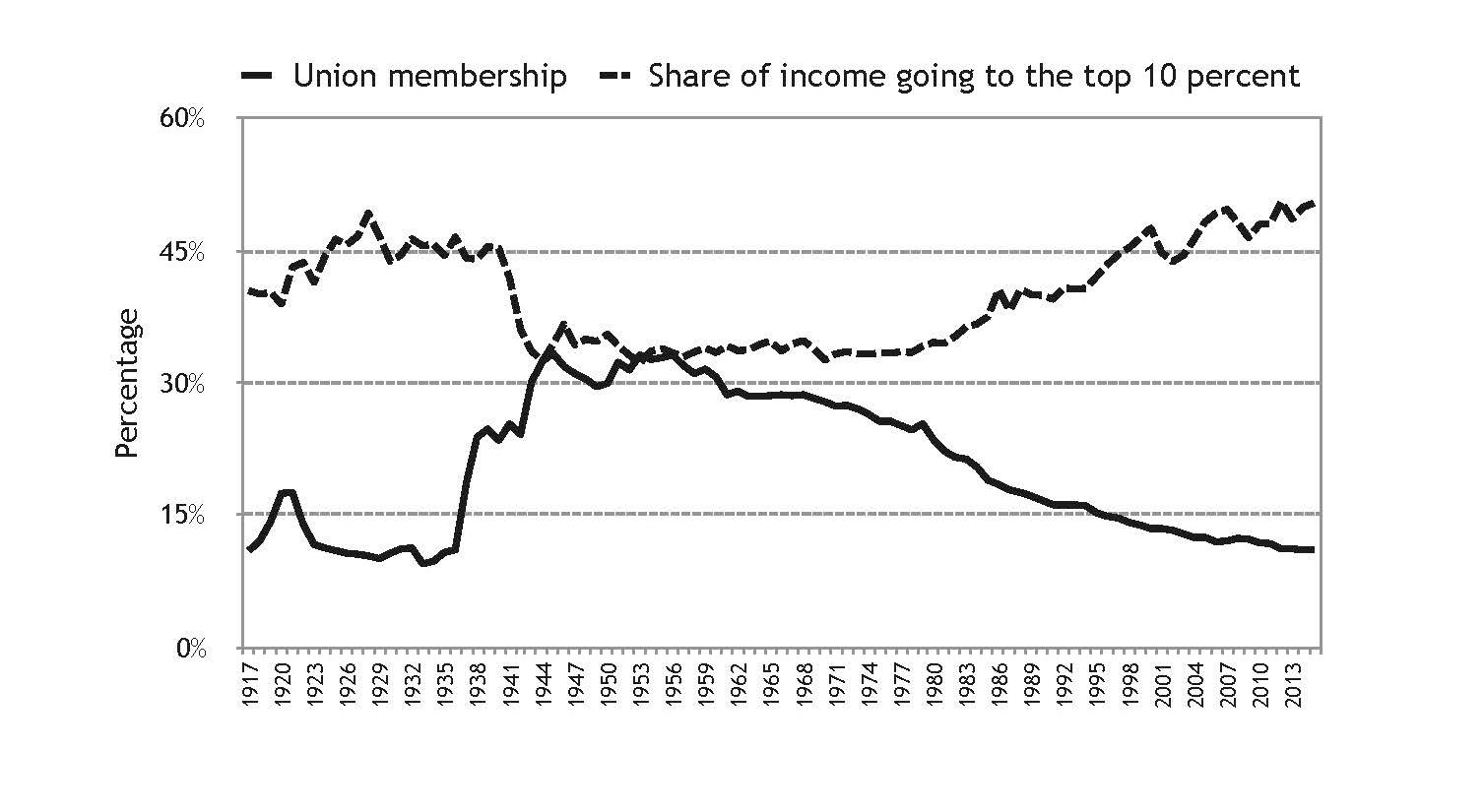 (Source: Adapted and updated from EPI)

The union-household vote for Hillary Clinton in the recent presidential election was the lowest for a Democrat since Jimmy Carter won only 48 percent of the union-household vote in his defeat by Ronald Reagan. Only 51 percent of union households voted for Clinton, while Donald Trump won 43 percent, more than any other Republican candidate since Reagan in 1980 and 1984.

White workers, especially union workers in Iowa, Wisconsin, Michigan, and Pennsylvania, many of whom had voted for Obama, backed Trump, casting the decisive votes to secure Trump the presidency. While Obama won white union workers by a margin of 18 percent, Hillary Clinton did so by only 8 percent. 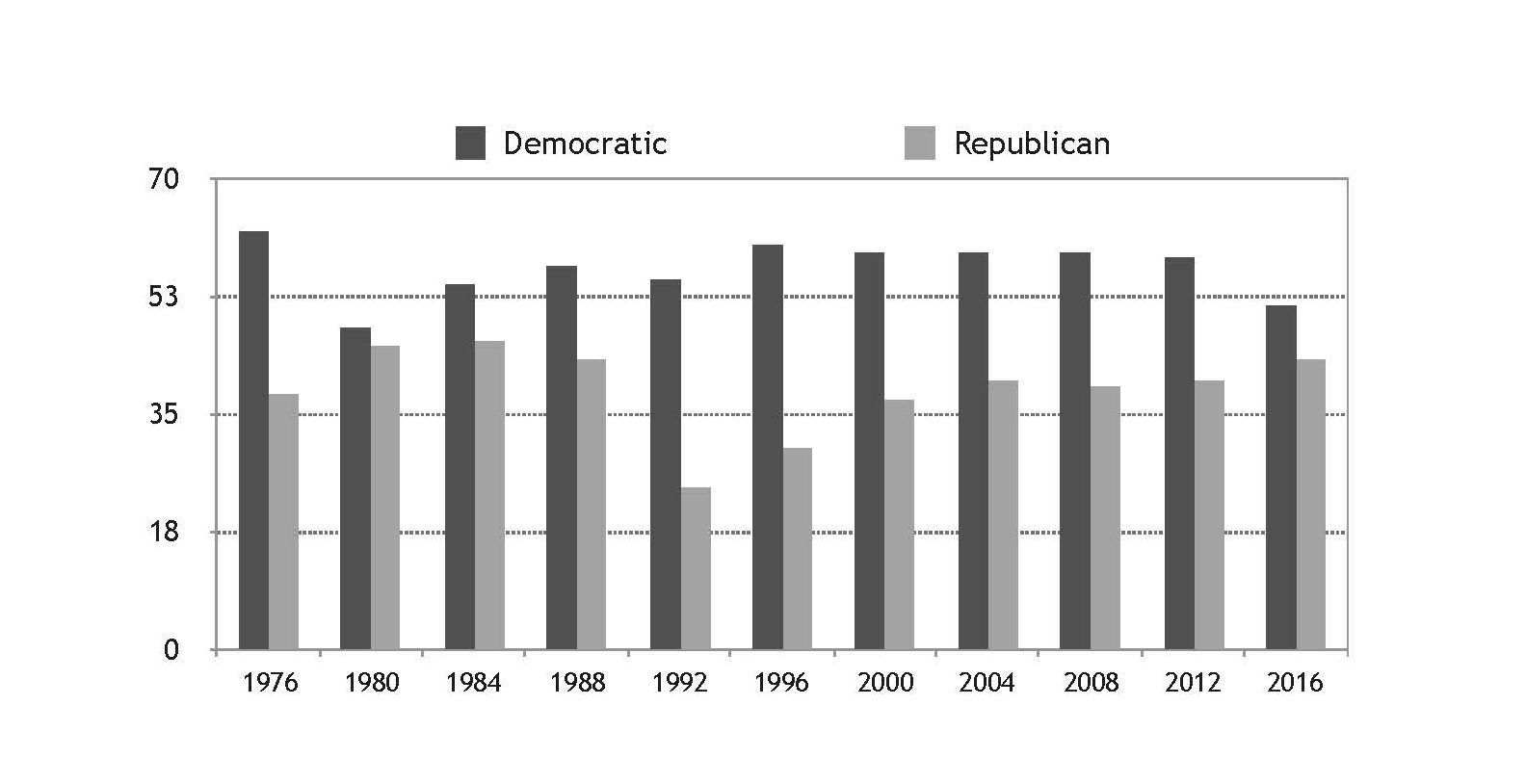 The Democratic Party recently announced “A Better Deal” for working people in the United States. Writing in the New York Times, Senator Chuck Schumer claimed that “Democrats will show the country that we’re the party on the side of working people.” Similarly, Nancy Pelosi in the Washington Post wrote, “Americans deserve better than the GOP agenda, so we’re offering a better deal.”

Aside from criticism of the slogan, the Democrats have received guarded support for this initiative from parts of the left, accompanied by harsh criticism for some of the policy proposals, as well as dismissal from other sections of the left.

Noticeably absent from “A Better Deal” is any mention of unions. Maybe the Democrats still have much to learn from Jeremy Corbyn’s achievement in the British election. In its election manifesto, the British Labour Party makes clear that in striving for “a fair deal at work,” it will “empower workers and their trade unions — because we are stronger when we stand together.”