The Better Business Bureau pulled Wells Fargo’s accreditation last week, which is what it’s supposed to do when businesses cheat their customers. What took so long? If we judged big banks by the same standards we apply to auto body shops or dry cleaners, they’d have all been discredited a long time ago.

One of the factors leading to the Wells Fargo downgrade, according to the Bureau’s website, was “government action(s) against the business.” That’s consistent with its stated rating process, which says it considers “finalized government actions (which) … raise questions about the business’s ethics or its reliability in providing products/services.”

That fine, as far as it goes. Wells Fargo was fined $185 million after its employee incentive plan led to the creation of at least two million false customer accounts over a minimum of five years. It’s now under criminal investigation by California Attorney General Kamala Harris. A downgrade was certainly in order.

But how could Bank of America win an “A+” rating under the same criteria? Bank of America has paid more than $77 billion in fines and settlements, including a single settlement of $16.65 billion — at that time the largest such penalty in history — as punishment for its serial fraud. (Some of that fraud was committed at Countrywide and Merrill Lynch prior to their acquisition, but much of it was perpetrated under Bank of America’s management.)

The Better Business Bureau’s website says, “Government actions may be rated as major, moderate or minor, and the rating deduction varies accordingly.” Wasn’t Bank of America’s $77 billion in fines and settlements “major” enough?

For that matter, how could an unbiased and independent pro-consumer group give a good rating to any big bank? Here’s how much our largest financial institutions had paid to settle fraud charges by late 2015: 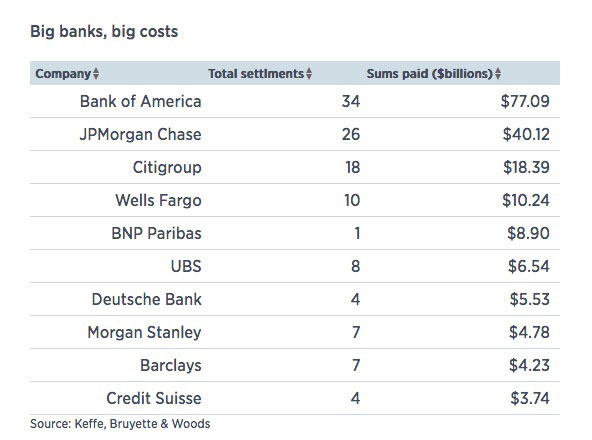 Compared to the fines paid by these banks — and to past fraud settlements by Wells Fargo itself — Wells Fargo’s $185 million phony-account penalty seems like small change.

Michael Hiltzik asked a pertinent question in the Los Angeles Times: Why did Wells Fargo’s CEO lose his job while Jamie Dimon, CEO of fraud-ridden JPMorgan Chase, has managed to keep his?

As Hiltzik (who discussed this issue with me) points out, Dimon usually turns in a smooth performance when he testifies on Capitol Hill. But Wells Fargo CEO John Stumpf stumbled badly, while Sen. Elizabeth Warren made a stunning case for the prosecution. What’s more, as Hiltzik writes, “JPMorgan’s misdeeds tended to involve complicated transactions that laypersons could not understand.”

The same could be said of Bank of America and other major banks.

Another insight into the Better Business Bureau may come from its own past scandals. It’s been charged with operating a “pay for play” system that favors corporations who pay its membership fees. A CNN Money investigation in 2015 found that it gave A+ ratings to a number of companies that had received major government sanctions. They included mortgage brokers and financial firms, as well nursing home chains, vitamin manufacturers, and medical testing services.

In 2003 the Better Business Bureau exposed a for-profit company, the “Consumer Protection Agency,” for masquerading as a part of the US government. But the Bureau isn’t a “bureau,” either, at least not in the government sense.

Neither are ratings “agencies” like Standard & Poor and Moody’s. They’re paid to rate banks and their products by the banks themselves, which is an inherent conflict of interest. Perhaps unsurprisingly, these “agencies” gave “AAA” rating to investments that reached junk status a year later.

Hiltzik is right: Wells Fargo’s latest scandal has captured the public’s attention because it’s easier to understand than other, more esoteric forms of bank crime. Those crimes won’t end until banks, and bankers, pay a price for their misdeeds. Banking must be demystified, so that Wall Street institutions and their CEOs can be judged like other business people.

If an auto shop owner says you need a new muffler when you don’t, everyone understands that’s sleazy and crooked. Well, Wells Fargo’s phony-account scandal was something like that.

If a street vendor sells knockoff watches for fifty times their actual value, that’s dishonest and criminal. That’s pretty much what all the big banks did to investors in the run-up to the 2008 financial crisis.

If a con man misleads someone into signing their most valuable asset over to him and then leaves them homeless, we all know he’s doing something reprehensible. In moral terms, that’s what the big banks did when they sold people mortgages they knew they couldn’t afford and then foreclosed on their homes — often using illegal methods to do so. (See David Dayen’s “Chain of Title” for more information.)

Today’s too-big-to-fail banks are morally indistinguishable from any crooked vendor in the strip mall down the street. Americans won’t be safe until all fraudulently-inclined institutions are discredited and their leaders are replaced — with criminal investigations conducted as appropriate.

Until then, it’s “buyer beware.”