It is the holy month of Ramadan, and I’m sitting on prayer rugs spread on the floor of an apartment, palms cupped and raised, making supplications to the All Knowing. I am surrounded by roughly 30 queer, trans, gay and/or radical members of the Los Angeles Muslim community. I am one of the few non-queers in the space, and what a blessing it is. We are all there for an iftar — a community meal where we all break our fast together. Many of us have spent the whole day fasting from sunrise to sundown, abstaining from water and food. We are also seeking to abstain from evil thoughts, but that is proving difficult for me because it is the evening of Sunday, June 12, and Omar Mateen has just attacked Pulse, a queer nightclub in Orlando, on its Latinx Night, murdering 49 people and injuring 53 more.

It was a come-as-you-are space, a safe space for many who probably kept either their faith as a Muslim or their queer identity a secret in some part of their lives.

This moment will live on in my memory, a crystallization of my struggle to digest the devastating news about the mass shooting at Pulse. Since the moments of the crime, we have heard many pivots and twists to the story. As soon as the news came out that Mateen is Muslim, the dominant media narrative shifted to his alleged “radical” connections and rampant homophobia. Both main parties’ presidential candidates made speeches about “radical Islamism” and “homegrown terrorism.” It only took 24 hours before the news revealed that Mateen had gone to the club numerous times and may have been gay, that his allegiance to Islamic extremism was not ideologically coherent, and that he had no real ties to extremist groups. He was diagnosed with bipolar disorder. He had perpetrated domestic violence. He was being investigated by the FBI and he had no problem accessing guns. He trained in the police academy and worked in surveillance. He was a loner. He had lots of secrets. 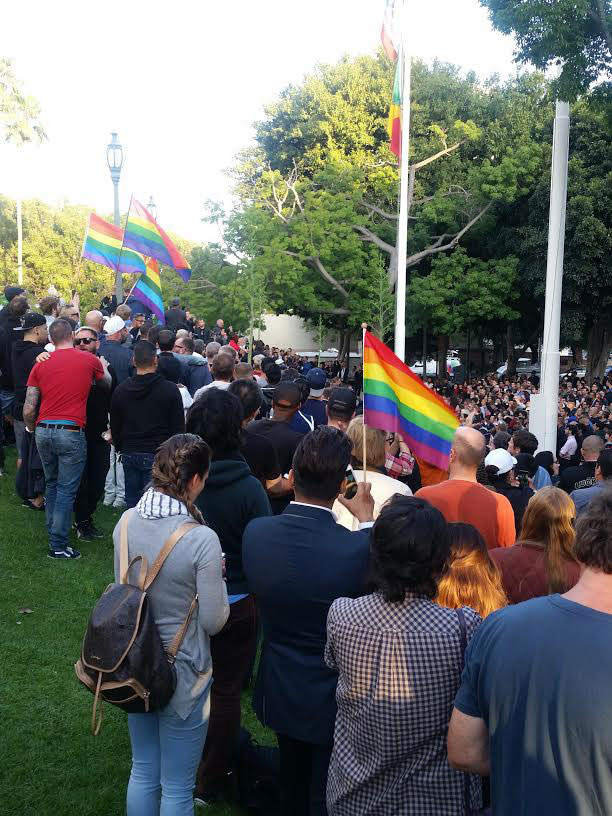 A crowd gathered at a vigil in Los Angeles, California, on June 13. (Photo: Tanzila Ahmed)At the queer iftar on Sunday, I was warmed by the diversity of folks in the room. The Islam I was raised with was dogmatic and siloed. I didn’t realize until I was much older that there were different sects of Islam, nor did I understand that not all Muslims were from South Asia like my family. The conservatism I was raised with was much like the conservatism you see in most religions — no gays, no premarital sex, no abortions, an imperative to cover oneself, lots of prayer and lots of redemption. But in the iftar space I was in, and in most of the spaces I found myself in as an adult, the Muslim community was inclusive. There were people of all races, nationalities, sexualities, practices and genders. There were people who are converts and others who weren’t. There were people who were immigrants and others who were born in the US. There were people with tattoos and people who wore hijabs. It was a come-as-you-are space, a safe space for many who probably kept either their faith as a Muslim or their queer identity a secret in some part of their lives.

As I sat there in the warm embrace of this community as an ally in a safe space created for and by Muslim queers, I felt humbled to experience an Islam like this.

We are currently living in a political time where fearmongering is a very real political tactic. Both presidential front-runners made the mass shooting about so-called “radical Islamism” instead of addressing the very real issues of gun control, mental health, homophobia (whether internalized or otherwise) and domestic violence. Historically, we have repeatedly seen an escalation of hate-based attacks the closer we get to Election Day, whether the hate crimes are anti-LGBTQIA or anti-Muslim. What happened between midnight and dawn on Sunday sat solidly at the intersections of two systems of oppression — Islamophobia and homophobia. Too often, we blame these hate-fueled attacks on the individuals who perpetrate them. We forget that there is a system of oppression in place that led them there: What I refer to, tongue in cheek, as a “fear industrial complex.” According to a report by Fear Inc., between 2001 and 2012, eight donors collectively gave $57 million to fuel Islamophobia in the United States. Many of these donors also funded the well-organized, anti-LGBTQIA right through multiple campaigns including preventing same-sex marriage, promoting anti-transgender bathroom bills, supporting so-called “religious freedom restoration” acts and much more. 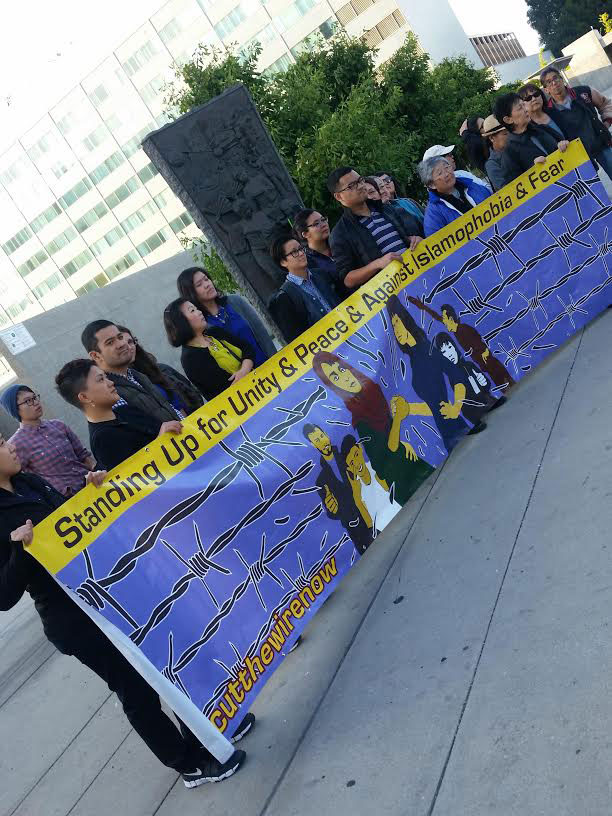 An Asian American and Pacific Islander contingent participates in a march at City Hall in Los Angeles on June 13, in response to the mass shooting at the Pulse nightclub in Orlando, Florida. (Photo: Tanzila Ahmed)

I keep thinking about all the spaces I’ve been a part of during the past 10 years that have a queer lens and radical politics — from youth camps to zines to organizing groups to art collectives and dance floors. I keep thinking about all the Muslim queer and trans folks I’ve met over the years, and just how many of them are holding those identities as secrets. How many of them were youth and came through our leadership trainings. How one of them is an immigrant seeking asylum for fear of persecution in his home country for being queer, and how his parents don’t know. I keep thinking of how many people with whom I hold this very private secret, and how being a secret-keeper is just as important as someone who protects safe spaces.

As we move forward from this tragedy and toward what will inevitably be the next, I challenge you to think of how you hold safe spaces for those on the margins. How do you invite Muslims into your non-Muslim spaces? How do you center the narratives of the LGBTQIA community while holding their lives and secrets precious? As Election Day draws closer and the fearmongering systems of divisiveness and oppression remain in place, it is inevitable that more tragedies will come. So let’s hold onto those sacred safe spaces.

Donate Now
Share
Copyright, Truthout. May not be reprinted without permission.
Tanzila Ahmed

Tanzila ‘Taz’ Ahmed is an activist, storyteller and politico based in Los Angeles. An electoral organizer by trade, she’s mobilized thousands of Asian American and Pacific Islanders to the polls in more than 17 different languages in the past 15 years. Essayist, poet and now podcaster, her writing developed around creating a counternarrative for the communities that she belonged to, whether youth, Muslim, South Asian or counterculture. She can be heard monthly on The #GoodMuslimBadMuslim podcast and can be read monthly in her Radical Love column at loveinshallah.com. She was a long-time writer for Sepia Mutiny and is published in the anthology Love, Inshallah: The Secret Love Lives of American Muslim Women. Her writing has been featured on The Aerogram, The Nation, Left Turn Magazine, Angry Asian Man, MTV Iggy, Taqwacore Webzine, Mideast Tunes, The SAALT Spot, Wiretap Magazine, AlterNet, IMOW, PopandPolitics, Kahani, Falling Star Magazine and more.