New Orleans — Last month, a large cloud of flammable gas ignited at an ExxonMobil refinery near Baton Rouge, Louisiana. Six workers were injured during the 14-minute-long fire, and four of them were hospitalized with severe burns. Federal investigators said the flammable plume escaped during “unplanned maintenance” around a pump.

Soon after the accident, Anne Rolfes, the director of the Louisiana Bucket Brigade, a group that tracks petrochemical pollution and accidents in the state, told reporters that the fire was not an isolated incident. There was a fire at the refinery in December 2015, and the facility reported 890 accidents to the government from 2005 to 2014 — an average of over one per week.

The refinery is one of the country’s largest and a major reason why ExxonMobil ranks among the top five air polluters in the nation. Rolfes says the rest of the country can learn a lot from Louisiana as it prepares for the incoming administration of President-elect Donald Trump, who has promised to gut regulations and expand oil and gas production. Trump’s likely pick for secretary of state is none other than ExxonMobil CEO Rex Tillerson.

“Louisiana is a cautionary tale of what happens when the federal government backs away from its responsibility to protect us,” Rolfes said. “We have pollution, illness and a coast that has been destroyed because of relentless oil industry drilling and spilling.”

Exxon’s refinery in Baton Rouge is just one of many petrochemical and fossil fuel facilities that dot Louisiana’s Mississippi River corridor and much of the Gulf South. Accidents and spills occur daily in Louisiana’s expansive oil and gas industry, which dominates both the landscape and the politics in this conservative state.

From October 7 to November 14, 156 petrochemical accidents in Louisiana and its offshore oil fields were reported to the government’s USCG National Response Center, largely by the industry itself, according to the Bucket Brigade. In addition, residents filed dozens of reports with environmentalists detailing suspected accidents, foul-smelling air pollution and even a strange ash falling out of the sky.

The Bucket Brigade blames most accidents on aging infrastructure and deteriorating equipment. Many accidents result in leaks or spills rather than immediate injuries, but some accidents are severe and even deadly.

The southern end of the state is also experiencing land loss at record rates, in part because the infrastructure and dredging for oil and gas production has compromised wetlands that act as natural barriers to flooding, saltwater and storm surges. Cultural workers are collecting oral histories about fishing communities, Native American bayou homesteads and other cultural landmarks that are at risk of disappearing under water.

The rising seas of climate disruption, which is caused by burning these fossil fuels, further exacerbates land loss and damages pipelines and equipment, leading to even more accidents and spills, according to Ezra Boyd, a researcher who maps out industry accidents and runs Disastermaps.net.

It’s a price Louisiana pays for significant tax revenue from the fossil fuel industry, which exceeded $1 billion annually for nearly a decade until oil and gas prices plummeted last year, leaving the state in a severe budget crunch. The industry also made at least $3.6 million in campaign contributions to Louisiana politicians in 2014 and 2015 alone.

The oil and gas industry holds considerable power on Capitol Hill — a power that is on full display in Trump’s cabinet picks. Tillerson’s likely nomination has infuriated environmentalists, who point to Exxon’s history of funding climate change denialism and causing environmental catastrophes, such as the Exxon Valdez oil spill. In a recent statement, Friends of the Earth said putting Tillerson in charge of the State Department would be the “ultimate bad deal for Americans and our climate.”

Environmentalists are also dismayed by Trump’s pick to run the Environmental Protection Agency (EPA), Oklahoma Attorney General Scott Pruitt, who is notoriously close with the energy industry. Pruitt’s state ranks 10th in the nation for oil production and the industry has injected so much wastewater into underground wells that earthquakes have erupted across the state.

Pruitt is a climate change skeptic who has sued the very agency he hopes to run multiple times for attempting to regulate toxic air pollutants like mercury and fend off climate disruption by reducing the amount of carbon dioxide produced by power plants. Fossil fuel and utility companies have rewarded him in turn. In 2014, Pruitt raised $129,675 from energy and mining companies, and nearly half of the $420,000 raised over the past year by a PAC closely tied to his office came from the energy industry.

Pruitt prides himself on being a champion of states rights, and established a “federalism unit” at his office in Oklahoma. He has long argued that the EPA engages in federal overreach when it tries to expand and enforce rules for air and water pollution, and that state governments should be the primary providers of environmental protections. (Critics point out that Pruitt’s states’ rights advocacy apparently does not apply to all issues: He invoked the primacy of federal law when suing neighboring Colorado over its decision to legalize marijuana.)

The oil and gas industry has long supported reducing federal regulation in favor of regulation at the state level, where it can wield considerable political power. It’s also well known that some states have weaker regulatory regimes than others. Rolfes points to a 2011 report issued by the EPA’s inspector general, which ranked Louisiana at the bottom among all 50 states for environmental enforcement due to lack of resources, natural disasters and “a culture in which the state agency is expected to protect industry.”

“Less federal oversight? You’ve got to be kidding me,” Rolfes said. “We need a responsible federal government to take over our state Department of Environmental Quality and finally protect the people. They should be swooping in here like vultures on a carcass.”

“Under the current administration, our industry is facing a barrage of 145 regulations that would unnecessarily destroy jobs and add costs to consumers,” Gerard said.

Back in Louisiana and neighboring Texas, the Gulf coast’s centers of oil refining and production, the API is sparring with the Bucket Brigade and other environmental groups over this “barrage” of regulations, including new standards meant to protect people who live near refineries from toxic emissions. In particular, the rules require refineries to monitor for the cancer-causing chemical benzene in areas where their facilities share fence lines with residential areas.

A Battle Over Benzene

In February, environmental groups challenged the EPA in court to close exemptions in the rules allowing refineries to flare unlimited amounts of smoke and pollution when equipment malfunctions. The API and its allies filed their own lawsuit to block the rules. The EPA went back to the drawing board and released revised rules months later.

Environmentalists say the rules are not as strong as they could be but are still badly needed. Indeed, federal accident records show that “flares” from refinery stacks that belch benzene and other toxic chemicals into the air when equipment malfunctions are not uncommon in Louisiana.

Rolfes says pollution protections like the benzene rule could be quickly rolled back as the Trump and Pruitt make good on promises to gut regulation. What impact that will have remains to be seen and could vary from state to state. States like California, for example, have more robust regulatory regimes and pollution rules than Louisiana.

“It’s that our state has chosen not to enforce environmental laws,” said Rolfes, who added that Gov. Jerry Brown of California has already told Trump “not to mess” with his state’s environmental regime. 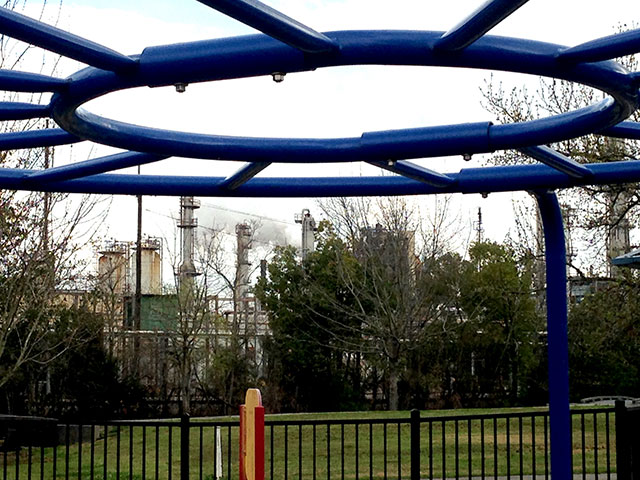 In this 2015 photo, emissions rise from a refinery behind the monkey bars at a playground in Norco, Louisiana. Residents and environmentalists have been sparring with the American Petroleum Institute over new EPA rules requiring operators to monitor for cancer-causing benzene emissions where refineries share fence lines with residential areas. The industry supports politicians that oppose to such regulations. (Photo: Mike Ludwig)

With Trump entering the White House and the Congress in GOP hands, environmental groups are focusing their climate efforts on state and local governments. Driven by a combination of market forces and state and federal policies, a transition towards renewable energy is already underway across the country, including in some red states, such as Texas, according to the Natural Resources Defense Council (NRDC).

On Monday, the one-year anniversary of the Paris Climate Agreement, leaders from cities, such as Philadelphia and Orlando, urged Trump not to back out of the agreement and highlighted their local efforts to cut pollution.

“Cities are on the frontlines of climate impacts but we’re already spearheading the solutions,” said Mayor Jim Kenney of Philadelphia in a statement.

However, Louisiana is not on the list of states that have seen significant increases in energy production from sources, such as wind and solar. Many conservative politicians here remain skeptical of climate change, even as environmentalists warn that the state is facing an existential crisis due to land loss and pollution.

“They are actually destroying, on a large level, the planet, and on a very personal level, the places we really love,” Rolfes said. “And that’s why we are fighting back.”