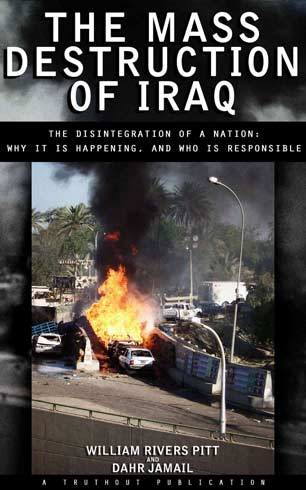 (Image: Truthout)Ted Asregadoo speaks to Truthout staff writers William Rivers Pitt and Dahr Jamail about their new book, The Mass Destruction of Iraq, as well as the lead-up to the war, the devastation it wrought and the current conflicts that are tearing the country apart.

It’s been over a decade since the United State shocked and awed Iraq into “liberation.” The grand designs that framed the invasion and occupation of a country whose regime was once an ally of the United States was planned by a cabal of right-wing zealots in Washington DC at the (now defunct) organization, The Project for the New American Century. The series of events that led to the war included the installation of George W. Bush by the US Supreme Court as president after a disputed election in 2000, the collective fear of terrorism in the aftermath of 9-11 in 2001 and the use of a complicit and willing media to manufacture propaganda based on false intelligence. The media-driven narrative that filtered down from the Bush Administration to eager media outlets like The New York Times, CNN, Fox News, and MSNBC stated, beyond a doubt, that Saddam Hussein’s regime was in possession of weapons of mass destruction, that Iraq had procured materials to build nuclear weapons and was linked to the attacks on the Pentagon and the World Trade Center by Al-Qaeda terrorists. This was the political culture in the lead-up to the invasion of Iraq, and while the Obama Administration fulfilled the Agreement Between the United States of America and the Republic of Iraq On the Withdrawal of United States Forces from Iraq signed by President Bush in 2008, the rise of ISIS, the abuses of the Maliki government and threats to oil interests in the semi-autonomous area of Kurdistan, meant that US “withdrawal” from Iraq was short-lived.

The current state of Iraq is in flux. What happens in the future and what the United States does will certainly involve military action. However, it is important to remember and understand the history of how we got into the mess we’re in now, in order to find a way to close what Dahr Jamail called “the gates of hell.”