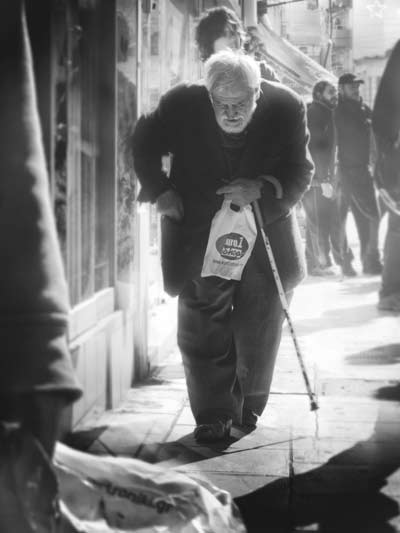 An elderly man passes a crowd of demonstrators while leaving a “one euro shop” in Greece, September 2012. (Photo: SpaceShoe / Flickr)In political and economic parlance, the term austerity has been de rigueur among bankers and political leaders after severe effects of the Great Recession. As the repercussions of an irresponsible and criminal money class continue to reverberate through the capitalist economies in the world, “the way out” of the crisis is through severe cuts to the welfare state – or so neoliberal economic principles would dictate. The effects of such cuts are not hard to see. One just needs to look at Greece, a member state of the European Union (EU), to see high unemployment, a shrinking of social services, the rise of diseases, drug use – and even suicide. This what happens when a social contract designed to cushion citizens against the economic harshness of a global corporate capitalist economy is shredded.

In this “Truthout Interviews, Panayota Gounari, Associate Professor of Applied Linguistics at the University of Massachusetts in Boston, illustrates the neoliberal response to the crisis of capitalism is to enact policies that have the markings of a kind of social necrophilia that Erich Fromm once described. The more Greek society decays under the economic ideology of neoliberalism, the more its Prime Minister says the policies are a success. That’s the very definition of social necrophilia. The leader of one of the oldest democracies comes alive with praise that “the system” is working the more his fellow citizens suffer.

Greece is a textbook example of why neoliberal policies must be curtailed. The more these ideas permeate a body politic and the economies of a society, the greater the likelihood “the night watchman state” that economic libertarians view as their utopia will be built on a proto-fascist movement – a movement that values the militarization of society to protect the property and profits of corporate capitalists, the surveillance of citizens (in the name of national security), and the eradication of the social safety net – unless it directly benefits the corporate class.