You can obtain Henry A. Giroux’s latest book, “The Violence of Organized Forgetting: Thinking Beyond America’s Disimagination Machine”, with a contribution to Truthout. Click here now.

The Agenda With Steve Paikin | Henry Giroux: Liberty and Justice for All?

The Agenda With Steve Paikin | Henry Giroux: The War on Justice 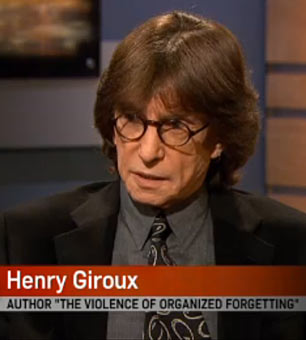 Henry Giroux. (Screengrab: tvo)“The land of the free, and the home of the brave.” Well, that is what the song says anyways. But scholar Henry Giroux says that America is slipping away, and being replaced with a surveillance state and culture of violence that’s threatening the very core of American democracy. He tells Piya Chattopadhyay why.

Also see: Henry A. Giroux on “The Violence of Organized Forgetting”

Author and scholar Henry Giroux sits down with Piya Chattopadhyay to discuss his new book, The Violence of Organized Forgetting: Thinking Beyond America’s Disimagination Machine. Giroux argues that the United States’ embrace of a surveillance state and culture of violence have replaced the values of freedom, liberty and justice, putting American democracy in jeopardy.

Piya Chattopadhyay is an award-winning Canadian journalist known for her work on CBC Radio, as well as on Fox News Radio, and TV Ontario. She is currently seen and heard as a fill-in anchor and host on TVOntario and the CBC’s radio and television networks, including on The Agenda, The Current, Q and The World at Six.

In 2010 she won the Gabriel Award for Do No Harm, her documentary about Dr. Izzeldin Abuelaish.