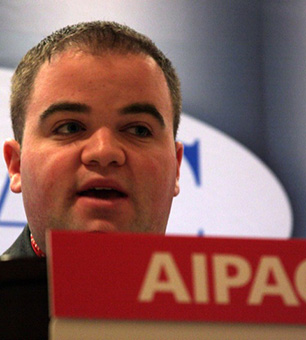 (Photo: Reuben Ingber / Flickr)President Obama has raised questions about the effectiveness of AIPAC’s tactics and even its role as the unchallenged voice of the pro-Israel lobby in Washington. If AIPAC can lose on Syria and lose on Iran, could it also lose on Israel-Palestine?

On February 3, 2014, The New York Times ran an article that would have been hard to imagine just a few years ago. Under the headline “Potent Pro-Israel Group Finds Its Momentum Blunted,” The Times‘ Mark Landler reported that the American Israel Public Affairs Committee’s top legislative priority, a Senate bill to cripple US diplomacy with Iran, had stalled after stiff resistance from President Obama, J Street and mobilized public opinion deeply wary of efforts to gin up another Middle East war. Landler concluded from this political development that the reach of AIPAC’s political power, long an unquestioned assumption in Washington, is now in doubt.

In doing so, the president has raised questions about the effectiveness of AIPAC’s tactics and even its role as the unchallenged voice of the pro-Israel lobby in Washington.

Landler reported that 70 House Democrats have backed a letter supporting Obama’s diplomacy with Iran (you can urge your representative to join that effort here) and that former Secretary of State Hillary Clinton also has strongly backed Obama’s Iran diplomacy and opposed AIPAC’s efforts to undermine it.

Strikingly, The Times cited Sen. Christopher Murphy, a Democrat from Connecticut, as embodying a trend of lawmakers who are “not worried about bucking AIPAC.” Indeed, Murphy has gone so far as to co-sponsor a petition with MoveOn calling on the Senate to reject AIPAC’s position.

In September, it threw an army of lobbyists behind an effort to win a congressional mandate for Mr. Obama’s threatened military strike on Syria. Facing certain failure in Congress, the president pulled the plug on the effort.

If AIPAC can lose on Syria and lose on Iran, this raises a spectacular question: Could AIPAC also lose on Israel-Palestine?

Secretary of State John Kerry recently infuriated Israeli officials by making the following statement at the Munich Security Conference about threats to boycott, sanction and divest from the Israeli occupation:

Today’s status quo absolutely, to a certainty, I promise you 100 percent, cannot be maintained. It’s not sustainable. It’s illusionary. … You see for Israel, there’s an increasing delegitimization campaign that has been building up. People are very sensitive to it. There are talks of boycotts and other kinds of things.

What Kerry said about “boycott” has become the new normal for the Obama administration and many liberal American Jews who support the two-state solution. The rap goes roughly like this: “Personally, we, the ‘good cop,’ oppose boycotting the Israeli occupation. But if the Israeli government won’t cooperate with US peace efforts, then we won’t be able to stop those ‘bad cop’ boycott people from increasing the Israeli government’s international isolation.” This drives the AIPAC supporters, to whom the idea of any pressure whatsoever on the Israeli government to comply with US policy is totally anathema, absolutely wild. But it’s hard to see what they can really do about it besides helplessly complain.

Speaking as one of the “bad cops,” I find the rap of the “anti-boycott” good cops kind of funny, in a good way. The official policy of the “good cops” is to denounce me and my friends. But the more we succeed in our efforts, the stronger their case. I guess, in this instance, denunciation is the sincerest form of flattery.