Raise your hand if you’ve ever heard of LuxLeaks. Anyone? LuxLeaks, also known as the Luxembourg Leaks, is one of the most interesting cases of international tax evasion of our time, and yet very few news outlets are talking about it.

Here are the basics: hundreds of companies were caught using tax avoidance schemes in the country of Luxembourg. It was exposed by a group called the International Consortium of Investigative Journalists (ICIJ) and now those who exposed this massive tax issue are under threat.

The Major Players in LuxLeaks

Those involved in the LuxLeaks scandal include the country of Luxembourg, the Prime Minister at the time Jean-Claude Junker (by the way now President of the European Union), a group of investigative journalists and employees from PricewaterhouseCooper (PwC) who leaked the documents in the first place. PwC is the fifth largest corporation in the U.S., and operates in a number of countries. Their Luxembourg office was home to these tax-avoidance schemes.

This handy illustration shows how dual or ‘hybrid loan’ schemes were used to avoid paying taxes: 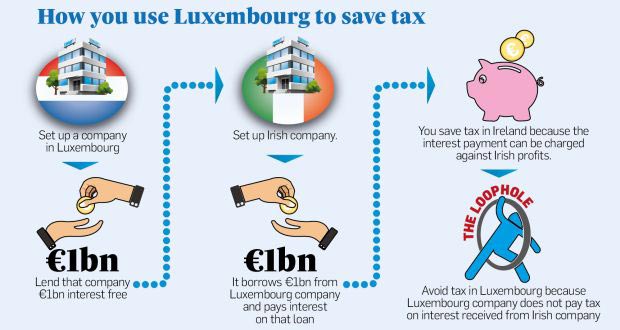 Anyone is welcome to scour the documents themselves at the ICIJ website.

So just who were some of these companies? Pepsi, IKEA, The Walt Disney Co., Deloitte, Earnest & Young, Koch Industries, AIG, Deutsche Bank and parts of the Canadian Government, to name a few.

Junker says he had no knowledge of the evasive tax practices, telling the press, “tax administration in Luxembourg acts autonomously, but I am politically responsible for these deals.” He also noted that everything that was done was, in fact, legal. And he is right there. These schemes were technically legal within the framework of the time. However, it turns out what the journalists did was considered less than legal.

This week, a journalist was charged in Luxembourg with facilitating the LuxLeaks scandal. Edouard Perrin, who has worked for a number of French news organizations, was criminally charged as the “co author” if not “accomplice” in exposing these tax documents.

The Luxembourg Leaks investigation, which Perrin played a key role in, revealed aggressive tax avoidance strategies that damaged national treasuries and hurt taxpayers at a time of austerity throughout the European Union. For a founding member of the EU to bring charges against a journalist in relation to reporting that is clearly in the public interest shows a lack of respect for the important role journalism plays in holding the powerful accountable.

Currently, besides Perrin, two employees of PwC were identified as being involved in the scandal. Although one wished to remain anonymous, a man named Antoine Deltour has spoken out, saying that he chose to leak documents due to a personal conviction. Deltour could face five years in jail if convicted.

Many within the journalistic and human rights communities believe that if whistleblowers and journalists are put in jail, while companies remain almost consequence free for their actions, it sets an incredibly dangerous precedence for the future of ethical business practices.

Is Anything Being Done?

However, this still could lead to a number of revelations. The committee has six months to complete their first stage of review before moving on.

It is a positive step that from the LuxLeaks scandal there has been European government concern as well as international outrage over companies paying next to nothing in tax evasion schemes. However, trying journalists and whistleblowers for exposing unethical business models shows we still have a long way to go on just who is being held accountable when a scandal is revealed.