“Her father was killed in Helmand amidst fighting between the Taliban and the Afghan/U.S.-NATO forces,” said a relative about Gul Jumma, who looked down, shy and full of angst, sensing a future that’s not promising.

Gul Jumma, together with the Afghan Peace Volunteers, expressed their opposition to wars in this video. Gul Jumma holds up the sign for ‘Ukraine’, indicating ‘No to wars in Ukraine’. She understands what it is like to be caught in the crossfire, as happened to her father when he was killed in battle. 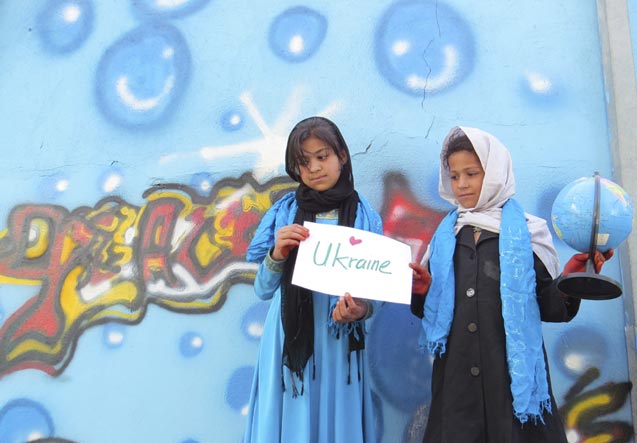 Gul Jumma on the right (Photo courtesy of WarIsACrime.org)

She and her surviving family members were displaced from her own village home in Helmand province in southern Afghanistan and now live in a squalid Internally Displaced Person’s ( IDP ) camp in Kabul. She is one of an estimated 600,000 IDPs in Afghanistan, whose flight is described as being ‘on the run without aid’.

Her hard experience has taught her to protect herself. She gets upset when the other street kids mistreat her in the literacy class. Sometimes, she snaps back at them.

When she was asked to draw a picture of her work in the streets, collecting scrap paper and plastic for her mother to use as fuel, she ignored her unpleasant work and drew herself wearing a colourful dress.

“I like wearing colorful dresses when I go to weddings or when my family and I are guests at the houses of our relatives and friends. My favorite fruit is the pomegranate.”

In a child-like way wiser than the complicated confusion of adults, Gul Jumma and the Afghan street kids see past the false differentiation between the ‘right and wrong and the good and evil’ sides of war.

They challenge us to be honest in giving an account to them, “Which warring side is good? Which killer is better?”

Like the Ukrainian child pictured below, they would say to any side or killer, whether the U.S.-backed Ukranian army or the Russian-backed rebels, or the U.S./NATO coalition-backed Afghan army or the Taliban/Afghan militia groups, “Don’t kill us!” 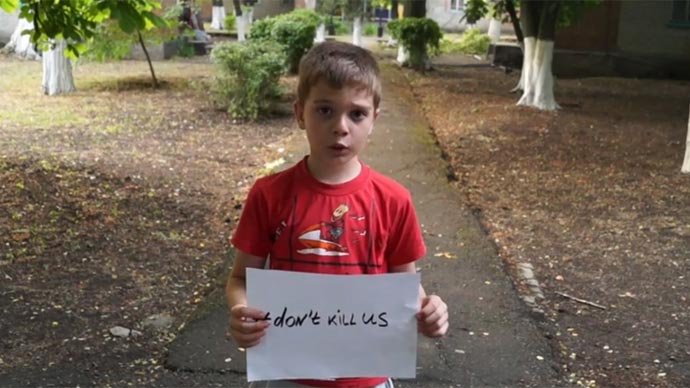 When Afghan youth, including little girls like Gul Jumma, hear people say that war is not the answer, like the anti-war Ukranian protesters are saying, they can empathize. The Afghan Peace Volunteers swiftly agreed to express their solidarity with the ordinary people of Ukraine.

The United Nations reported in June this year that a record number of 50 million human beings worldwide have become refugees.

50 million persons, for the self-interests of fighting groups and governments, have become human beings seeking refuge from fellow human beings.

Some Palestinians, including children, who took refuge in UN schools in Gaza, were bombed and killed by the Israeli military nonetheless. UN Secretary-General Ban Ki Moon called one such attack ‘a moral outrage and a criminal act.’

But, Mr Ban and the UN have been unable to do what the UN charter set out to do, to ‘remove the scourge of war from future generations’.

Waziri was an Afghan refugee in South Waziristan for 17 years. He and his family returned to live in Kabul in 2006. He told me the story of Pakistani Pashtun refugees who recently fled North Waziristan for relative safety in Khost Province of Afghanistan. “My friends and I mobilized a few community groups to provide oil, rice and sugar for about 610 refugee families in Khost,” Waziri shared.

So, the Pakistani army, backed by the U.S., stormed through North Waziristan, finding few if any Taliban, and forced fellow Pakistanis to flee from their own homes!

Waziri considers the military operation ‘a really big show’ at the expense of ordinary people. “I think the ISI and the Pakistani government themselves had informed the Taliban to leave! “said Waziri.

“The refugees I met in Khost lamented that they can’t go back to Waziristan now because they could be mistakenly killed by the Pakistani soldiers in the offensive. And, if the Taliban returned to the area after the offensive, the Taliban may kill them.”

Waziri ended off with this horrid story of our terrible human condition, “One of the refugees I met in Khost told me that as they were fleeing, his new-born baby was so weak from thirst that the baby died in his arms. Angry, disappointed and profoundly sad, the man carried the dead baby in his arms, and crying, he shouted at a Pakistani soldier, saying, ‘You might as well take the corpse of my baby and eat it. This is what you’re doing to us!”

These refugee stories show that the current leaders of the world, whether leaders of democratic or socialist governments or leaders of ‘extremist’ groups, have the same simplistic responses to wars, to the global refugee crises, and even to antiwar protesters : spying and surveillance, imprisonment, shoot and bombard, or Hillary Clinton’s slogan in Afghanistan to ‘fight, talk, build’!

The elite 1% of armed groups and armed governments are waging economic, environmental and military wars against the people! They, and perhaps we ourselves too, have lost our imagination and empathy.

But not Gul Jumma, not Waziri, not Ukrainian mothers who went on foot to a bridge carrying placards reading “Save our boys!”and not Israeli reservists who refuse to fight in Gaza. Certainly, not activists who go to jail for protesting elaborate secret government programs of targeted killings, drone murders, detentions without trial, torture and other clearly brutal acts.

Each of us should emulate them to protest against all wars, in solidarity with all refugees.

If there are 50 million refugees, there ought to at least be 50 million of us working together to divest and boycott, to stop military mobilization and conscription, to take the guilty elite to court, to participate in non-violent direct actions and protests and to provide all kinds of humanitarian assistance.

There ought to be at least 50 million of us working together to restore human dignity and freedom, including the building of small, self-governing, non-violent egalitarian communities, as practical alternatives to the status quo of a large, 1%-dominated, violent, unequal world.

‘No to Afghanistan in Ukraine. No to Ukraine in Afghanistan. No to wars in the world!’

We wish to live differently.

We no longer want anyone anywhere to be human fodder caught in the crossfire of armed groups and armed governments.