Four-year-old Alisina was playing in the fields outside her house in the Maidan Wardak province of Afghanistan, located 80 kilometers from the capital city of Kabul, on a mid-April morning. Only vaguely aware of the constant war that surrounds them, Alisina and her friends didn’t know the large metal object they found in the field that day was in fact an unexploded ordnance left behind by one of the warring parties. The little girls squabbled over who would get to play with it first, and Alisina won the rights to the deadly weapon, which minutes later exploded in her hands as she attempted to lift it.

“She has shell injuries to [her] face and both eyes, chest and hands. Her thumb and third finger required traumatic amputation,” Alisina’s doctor at the Emergency Hospital in Kabul told me in an interview.

“We had heard a lot of such cases happen to other families in our village, but [I] never thought it could happen to one of my children,” Alisina’s mother told me as she waited for her little girl to gain consciousness. “We don’t know if it was the Taliban or the Afghan National Army (ANA) who planted the bomb, but it was definitely something that was placed recently,” she said, explaining that there has been continuous fighting in the district over the last three years. 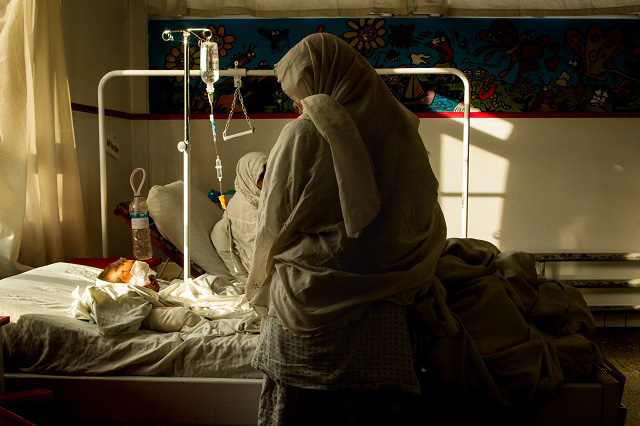 Alisina, 4, is watched over by her mother inside Emergency Hospital in Kabul, Afghanistan, on May 2, 2017. Alisina was playing outside of her home in Maidan Wardak when she found a land mine and it went off. The explosion wounded her in the face, damaging both of her eyes. She also took shrapnel to the chest and hands. Her thumb and third finger required traumatic amputation. (Photo: Ivan Armando Flores)

Alisina’s story isn’t a rare occurrence; it isn’t even unique, in a country that’s steadily spiraling back into a state of rampant war, as casualties have increased over the last three years. In fact, the 2016 civilian casualty figure was the worst since 2009, when the UN started documenting civilian casualty counts.

Just last week, an explosion killed five children in Laghman province. The children were playing in the vicinity of their home when they found an unexploded mortar round, likely fired during fighting earlier in the day. The five young boys, all from the same family, were killed when this mortar exploded as they were inspecting it. “A family destroyed in seconds — this horror is just one of too many incidents documented at the onset of this fighting season,” Tadamichi Yamamoto, the UN Secretary-General’s special representative for the United Nations Assistance Mission in Afghanistan (UNAMA), told Agence France-Presse.

In its annual report for 2016, UNAMA documented 11,418 civilian casualties, an increase over previous years. Children accounted for at least 30 percent of these casualties. The report noted 3,512 child casualties (923 deaths and 2,589 injuries), a 24 percent increase from 2015, and the highest number of child casualties recorded by UNAMA in any single year. 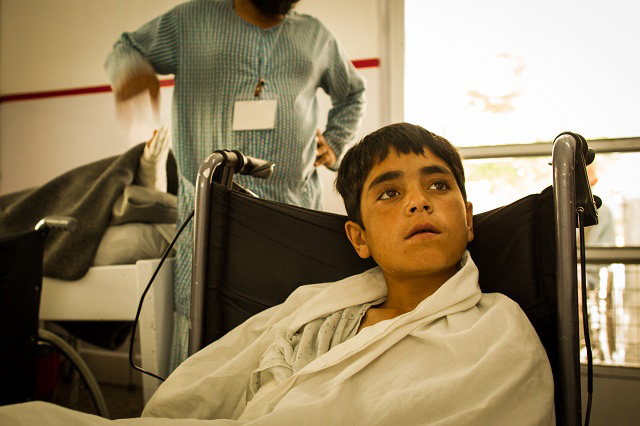 Barakatullah, a 10-year-old from Paktika Province, was riding on the back of his uncle’s motorcycle when they drove over a land mine. In this photo from May 2, 2017, he sits in a wheelchair in Emergency Hospital in Kabul. He has major wounds on his right leg and left arm. Doctors at the hospital say he will need skin grafts. (Photo: Ivan Armando Flores)

This year hasn’t been any better. According to the latest report, the first four months of 2017 have already been the worst ones yet documented for Afghan children. “[UNAMA] witnessed the highest recorded number of child civilian casualties resulting from conflict-related incidents in Afghanistan, including the highest number of children killed, for the same comparable period since the Mission began documenting cases [in 2009],” a statement by the UN agency read. Between January and April 2017, UNAMA preliminarily recorded 987 child casualties (283 deaths and 704 injured), a 21 percent increase in child deaths compared to the same period in 2016.

UNAMA attributed the rise in child casualties to “persistent use of indirect and/or explosive weapons in civilian-populated areas and due to the use of illegal and indiscriminate improvised explosive devices.” The statement urged “all parties to the conflict to commence marking, clearing, removing and destroying explosive remnants of war left behind from fighting in areas under their territorial control.”

While a number of the child casualties are from insurgent attacks and aerial airstrike by pro-government forces, a surprisingly high number of the casualties are a direct result of unexploded ordnance left behind on the battlefield by parties to the conflict who had failed to clear it. The report cited “554 child casualties (167 deaths and 387 injured) caused by this tactic (primarily pressure-plate and remote-controlled IEDs)” in 2016. 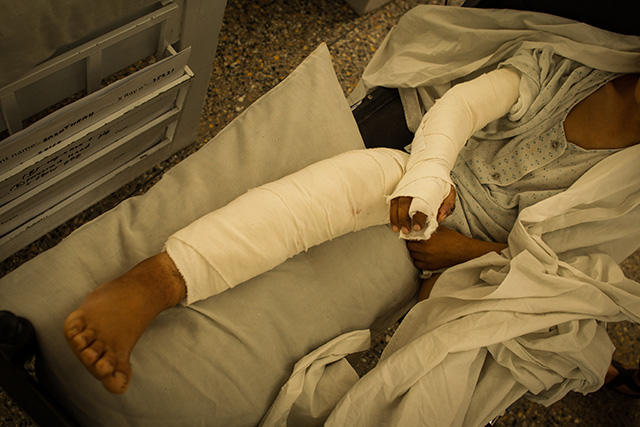 Barakatullah, a 10-year-old from Paktika Province, was riding on the back of his uncle’s motorcycle when they drove over a land mine. In this photo from May 2, 2017, he sits in a wheelchair in Emergency Hospital in Kabul. He has major wounds on his right leg and left arm. Doctors at the hospital say he will need skin grafts. (Photo: Ivan Armando Flores)

Illustrating this phenomenon, the report pointed to the deaths of two young boys and seven other injured children at a wedding party in Kunduz province, due to an unexploded rocket-propelled grenade left behind during the Taliban offensive in the city in the month before.

In another incident, UNAMA reported that detonation of an unexploded ordnance left behind by an international military base in the Shah Joy district of Zabul province killed a boy and injured five others.

According to a UN report, at least 235 civilian casualties (127 deaths and 108 injured) were caused due to aerial operations carried out by international military forces, a steep 44 percent increase compared to 2015. For example, in late 2016, a series of airstrikes conducted by the international military forces in Kunduz province killed 32 civilians and injured 36 others, mainly women and children. This series of airstrikes should not be confused with its 2015 predecessor, also in Kunduz, and also by international forces, that targeted a Médecins Sans Frontières (MSF) facility during the Taliban takeover of the province.

Hospitals like Kabul’s Emergency Hospital, which treated Alisina, confirm a spike in child casualties. “It’s true; we saw a much higher number [of] child casualties in 2016. About 27 percent of our patients were below 18 years of age and a large number among them were female; most were victims of IEDs [improvised explosive devices],” Dejan Panic, program coordinator at the Emergency War and Trauma Hospital, told me. “The numbers are telling us, yes, this year will be worse; this hospital is busy constantly. There are hardly any days we have an empty bed,” he adds.

Patient statistics shared by Emergency War and Trauma Hospital show that there was a 10 percent increase in war casualties in 2016 as compared to 2015. “It has doubled in the last five years,” Panic explained. 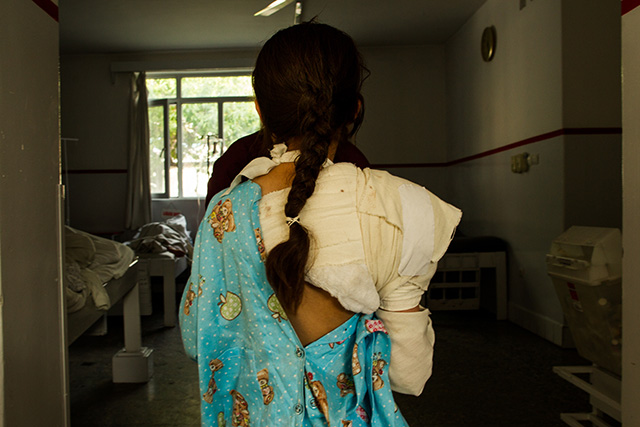 Nazbibi, a 9-year-old from Laghman Province, was playing with two other children and was caught in an IED explosion, according to doctors at Emergency Hospital in Kabul, Afghanistan, on May 2, 2017. (Photo: Ivan Armando Flores)

However, it is hard for Panic or any of the doctors to confirm if the IED casualties are from insurgents or international and pro-government forces. “The bombs and shrapnel don’t have an identity. We’re pulling out shards and metal wires from kids as young as two years old. It’s hard to tell who planted them,” a doctor in the children’s ward told me.

UNAMA believes that about 21 percent of the casualties that affected the children were perpetrated by the Afghan national security forces and pro-government armed groups.

The last annual report from the United States to the UN Office of Disarmament Affairs (UNODA), released in 2014, states that the US “supported various groups in clearance and destruction of Explosive Remnants of War” (ERWs) in Afghanistan. Additionally, it states that the US government conducted destruction of munition stockpiles that are likely to turn to ERWs in Afghanistan. However, it does not specify if any action was taken to identify and clear unexploded ordinances that were left behind by the international forces.

As the geopolitical disaster persists, children continue to be slaughtered.

Recently, I met the mother of nine-year-old Sayeeda, who was caught in a crossfire between the Afghan forces and local Taliban group in Ghazni province. Sayeeda was herding her family’s sheep in pastures not far from her house, when a bullet hit her in the head, causing a severe hemorrhage in her brain. She was taken to the Emergency First Aid Post in the Ghazni district center and moved to Kabul a day later.

“I don’t know who fired the bullet, but now I’m on the verge of losing my daughter,” Sayeeda’s mother told me. As Sayeeda’s condition deteriorates, there is very little hope of her survival, her doctor says. “But children can often surprise you; they’re stronger than we give them credit for,” the doctor added. Even amid near-constant tragedy, some hope persists.

As the US prepares to ramp up its war without end, how many of Afghanistan’s children will be lost to it? At this point, the odds seem to stack up against them.

Share
Copyright, Truthout. May not be reprinted without permission.
Ruchi Kumar

Ruchi Kumar is an Indian journalist based in Afghanistan, covering political, cultural and developmental stories from the region.