© 2022 Truthout
News Analysis
Unemployment Falls Below 8.0 Percent for the First Time Since January 2009

Upward revisions bring the monthly rate of job growth to almost 150,000 since June.

The unemployment rate fell by 0.3 percentage points in September to 7.8 percent, the lowest level since January of 2009. The drop was driven by an 873,000 reported increase in employment. The employment-to-population ratio (EPOP) rose to 58.7 percent, its highest rate since May of 2010. While the establishment survey showed just 114,000 new jobs for the month, the prior two months’ numbers were revised upward by a total of 86,000. This brings the average rate of job growth over the last three months to 146,000.

The jump in employment reported in September was almost certainly a statistical fluke. It is common to have large monthly changes in the employment numbers that are not consistent with other economic data. For example, employment reportedly rose by 649,000 in November of 2007, the month before the recession began. It dropped by 640,000 in May of 2000, when the economy was still in the middle of a boom. Still, this month’s numbers almost certainly indicate that the unemployment rate is moving downward, even if the speed is considerably slower than the latest data indicate.

The percentage of unemployment due to quitters rose to 7.9 percent, the second-highest level since the end of 2008. The number of discouraged workers also fell sharply from 1,032,000 to 802,000.

There was also less-positive news in the survey. The duration measures of unemployment all increased in September, and the number of people involuntarily working part-time rose by 581,000. This rise left the U-6 measure of labor market slack unchanged at 14.7 percent.

On the establishment side, by far the biggest job gainer was health care, which added 43,500 jobs in the month. This followed three months in which growth averaged an unusually weak 16,000 jobs. It is likely that the underlying rate of jobs growth in the sector is still near 25,000.

Restaurants added 15,700 jobs in September, roughly their average over the last year. The retail sector added 9,400 in the month, while real estate added 7,100, another sign of renewed health in the housing market. On the negative side, temporary help employment fell 2,000 after being flat in August. Manufacturing employment fell by 16,000 in September after dropping by 22,000 the prior month. Autos were the largest contributor to the decline, but it was felt across sectors. However, it is worth noting that average weekly hours in manufacturing rose by 0.1 hours, as it did for the private sector as a whole. 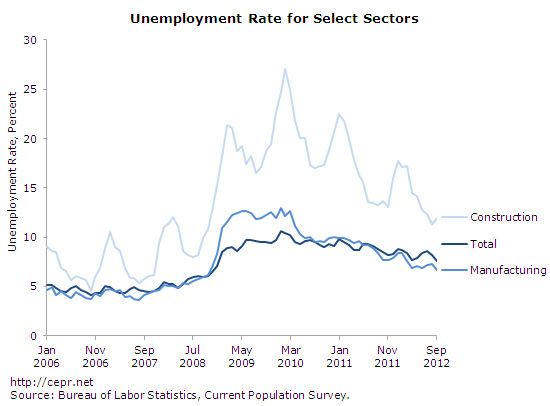 The public sector added 10,000 jobs in September, due to a rise in employment in state government education of 13,600. The upward revisions for the prior two months were almost entirely in local education, which is now reported as adding 79,000 jobs over the last three months. By comparison, the August report showed the sector losing 400 jobs between June and August.

The average hourly wage rose by almost 0.3 percent in September, but this follows two months of almost zero growth. It stands just 0.3 percent higher than its June level and 1.8 percent above its year-ago level.

This report provides further reason to dismiss the argument that unemployment is structural. The unemployment rate for workers in the two hardest hit sectors, construction and manufacturing, was 11.9 percent and 6.7 percent, respectively in September, meaning that the former contributed a trivial amount toward raising the overall unemployment rate, while the latter lowered it slightly.

The upward revisions to the July and August data do paint a qualitatively different picture of the labor market. The rate of job growth over the last three months is not especially robust, but it is at least fast enough to bring about some reduction in the unemployment rate. Nonetheless, at the current rate it will take more than a decade to reach full employment.