Crude oil imported to the U.S. from the Amazon, most of which gets refined in California, is driving expansion of oil operations into the rainforest, according to a new report.

Oakland, California-based non-profit Amazon Watch released the report this week to highlight the impacts of oil operations on Amazonian biodiversity and indigenous peoples, as well as on refinery communities in the U.S. and the global climate.

U.S. crude imports are in overall decline, the report notes. But imports from the Amazon are on the rise, so much so that the U.S. is now importing more crude oil from the Amazon than from any single foreign country. California’s refineries process an average of 170,978 barrels (almost 7.2 million gallons) of those imports every day — representing 74 percent of all Amazon crude imports to the U.S. and roughly 60 percent of total exports from Colombia, Ecuador, and Peru.

“All commercial and public fleets in California — and many across the U.S. — that buy bulk diesel are using fuel that is at least partially derived from Amazon crude,” Adam Zuckerman, Amazon Watch’s End Amazon Crude Campaign Manager, said in a statement. “Therefore, virtually every company, city, and university in California and around the country contributes to the destruction of the Amazon rainforest.”

The opening of new oil drilling concessions represents one of the most severe threats to the western Amazon, the group says. “Existing and proposed oil and gas blocks in the Amazon cover 283,172 square miles, an area larger than the state of Texas,” per the report. “Oil is presently being extracted from only 7% of these blocks, yet national governments aim to exploit an additional 40%, including those slated for pristine, mega-diverse forests such as Ecuador’s Yasuní National Park, a UNESCO Biosphere Reserve.”

In the report, Amazon Watch details the “triple carbon impact” of Amazonian oil extraction: carbon emissions are released when the rainforest is cut down to establish drill sites and the necessary roads and other infrastructure, which also means further destruction of the world’s largest carbon sink, and then even more emissions are created when the oil is ultimately burned for energy.

The Amazon plays a crucial role in regulating the global climate and hydrological patterns. The report notes that, therefore, deforestation in the Amazon can be said to contribute to the years-long drought in California, which is having a drastic impact on the state’s agricultural industry and causing massive wildfires. 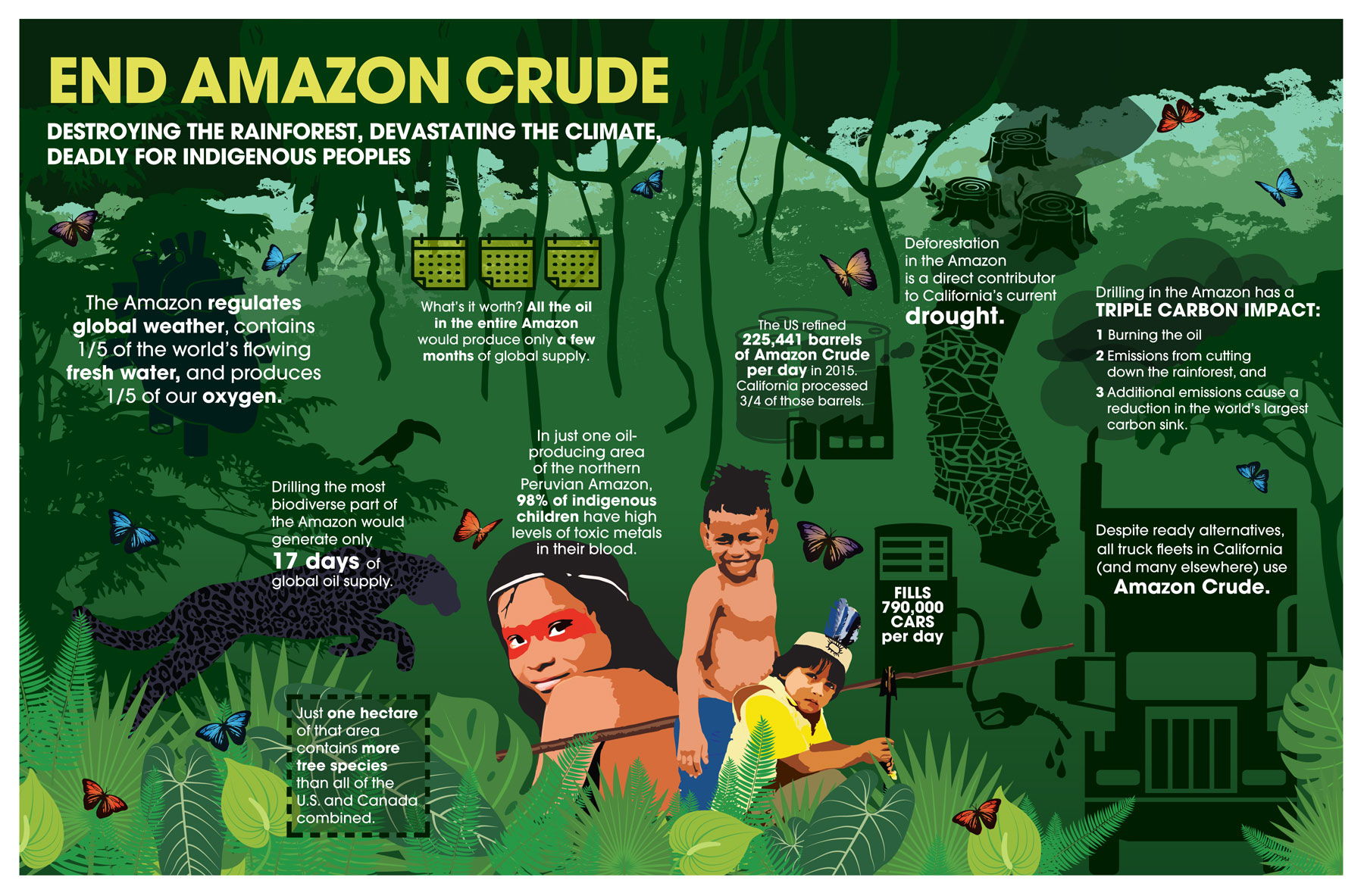 Of course, the Amazon is also home to the world’s highest levels of biodiversity, with more than 430 mammal species, 1,300 bird species, 56,000 plant and tree species, 5,600 fish species, 1,000 amphibian species, and 2.5 million insect species. Just one hectare of Yasuní National Park in the Ecuadorian Amazon contains 655 endemic tree species, more than all of the tree species in the United States and Canada combined. “Oil-driven deforestation gravely threatens this complex web of biodiversity, with recent studies linking major, exponential extinctions to forest loss,” the report states.

Esperanza Martínez, president of the Ecuadorian NGO Acción Ecologica, said in a statement that the crude oil that is imported into the U.S. from Ecuador “now carries with it a wave of disasters even greater than previous oil drilling history in the country, since drilling has begun in the Yasuní National Park. Yasuní is home to indigenous communities in voluntary isolation and forests full of immense biodiversity.”

Amazon Watch has also documented the impacts of oil operations on some of the hundreds of indigenous peoples whose traditional territories are in the Amazon. For instance, Peru’s Health Ministry reports that 98 percent of children in the indigenous communities of one oil-producing region of the Peruvian Amazon have high levels of toxic metals in their blood. In response, the country’s Environmental Ministry declared four river basins impacted by oil operations “environmental emergencies.”

“If you needed another reason why the time is now to stand up to the oil companies, this remarkable report provides it,” Bill McKibben, noted environmentalist, author, and founder of 350.org, said in a statement. “Ripping apart the Amazon rainforest and indigenous lives rubs salt in the deep climate wound our fossil fuel habit has created.”

McKibben authored an article back in 2012 for Rolling Stone entitled “Global Warming’s Terrifying New Math” in which he wrote that “We have five times as much oil and coal and gas on the books as climate scientists think is safe to burn” and argued that as much as 80 percent of the world’s fossil fuel reserves would need to be kept in the ground if we are to avert the worst impacts of runaway climate change.

Just last year, a study published in the journal Nature supported McKibben’s calculations. The authors of the study wrote: “Our results suggest that, globally, a third of oil reserves, half of gas reserves and over 80 per cent of current coal reserves should remain unused from 2010 to 2050 in order to meet the target of 2°C.”

Bill McKibben wasn’t the only notable climate activist to highlight the importance of Amazon Watch’s findings.

“Scientific research continues to tell us that we must keep dirty fuels in the ground and continue the transition to 100% clean energy if we want to preserve our communities, protect the health of our families, and tackle the climate crisis,” Sierra Club executive director Michael Brune said in a statement. “Putting an end to the destructive use of Amazon crude is a crucial first step in meeting that challenge.”

Amazon Watch commissioned Pulitzer Prize-winning animator Mark Fiore to create a short animation to accompany the report, which you can watch here:

“Amazonian peoples, many of whom consider oil to be the blood of Mother Earth, have long called on governments and corporations to keep it in the ground,” the Amazon Watch report states. “Now scientists are catching up with their calls, stating that we need to keep 80% of fossil fuels in the ground in order to have a good chance of averting catastrophic climate change. As our planet’s most important carbon sink, the home to over 400 distinct indigenous peoples, and the world’s most biodiverse rainforest, it is urgent that we keep the oil in the ground in the Amazon.”