As the remnants of Hurricane Harvey (now a tropical storm) continue to flood Houston — just days before the 12th anniversary of Hurricane Katrina — I visited Shannon Rainey, whose house was built on top of a Superfund site in the Upper Ninth Ward of New Orleans. Rainey is worried about family members in Houston. She knows all too well how long it can take to get back what is lost in a storm. “I still live with Katrina every day,” she told me.

New Orleans remains threatened by bands of rain extending from Harvey, causing many residents with fierce memories of Katrina to remain on edge. 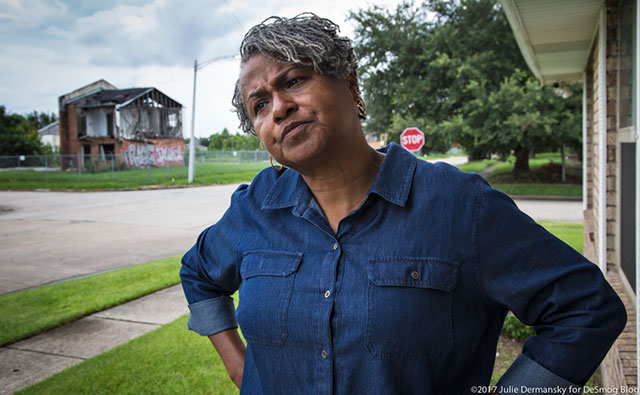 Shannon Rainey in front of her home in Gordon Plaza across from Press Park in New Orleans’ Upper Ninth Ward. (Photo: Julie Dermanksy)

Earlier this month, the city proved it was ill-prepared for hurricane season nearly a year after Baton Rouge’s 1,000-year flood. Rain inundated New Orleans, with more than nine inches falling in only three hours, exposing that the city’s pump system could not operate at full capacity. The city is still scrambling to make the needed repairs and clean the sewer system’s catch basins, which remain clogged in many places.

“This city isn’t ready to handle a lot of rain, let alone a hurricane,” Rainey said, while glancing across the street at damage caused by Katrina, still there almost 12 years later. 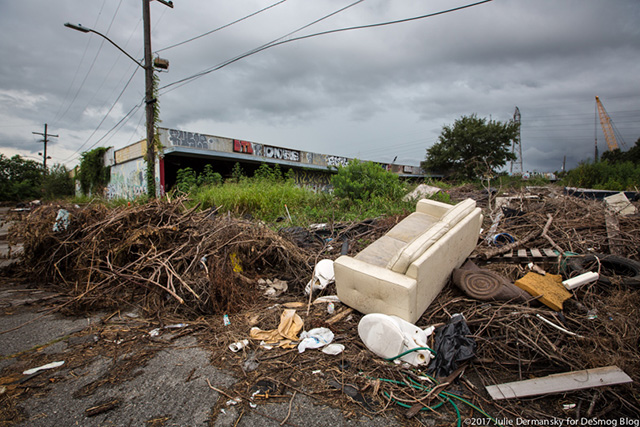 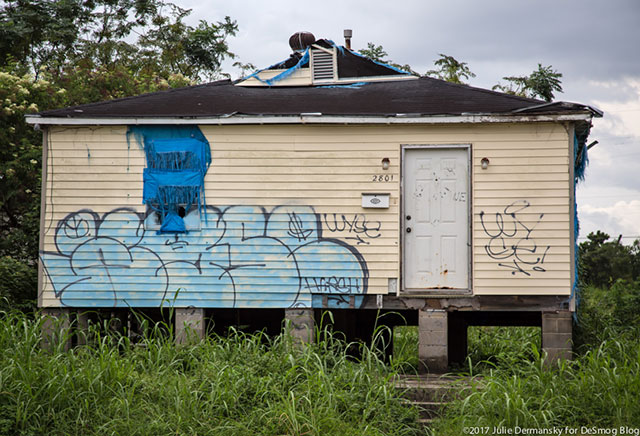 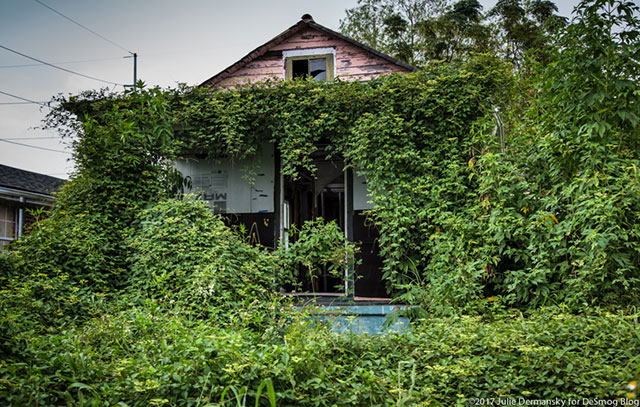 New Orleans Mayor Mitch Landrieu agreed. On August 27 he said residents should remain prepared for possible heavy storms and flash flooding in the middle of the week.

From Rainey’s front steps in the Upper Ninth Ward, one can see, and sometimes smell, the blighted remains of Press Park, a housing project abandoned after Hurricane Katrina. 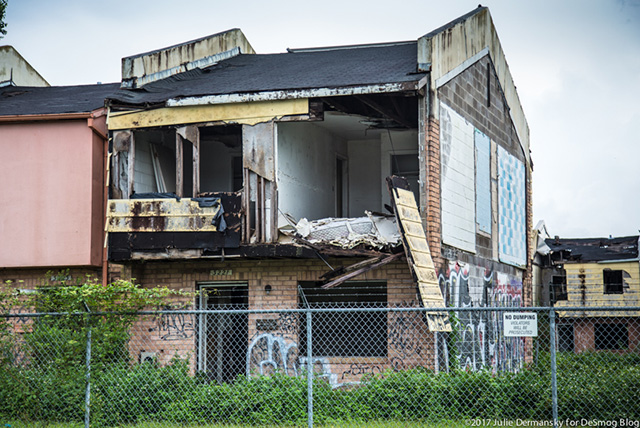 A Press Park housing unit torn open in New Orleans after Hurricane Katrina in 2005. Residents nearby complain about the smell that comes from the blighted structures after it rains. (Photo: Julie Dermansky)

On August 28, the Environmental Protection Agency (EPA) was set to re-sample the soil in Gordon Plaza, part of a subdivision the city developed on top of the Agriculture Street landfill in 1981. Rainey was hoping to get the agency to sample the soil under her home, but the EPA cancelled due to Harvey.

The Stench Before the Storm

Bryan Parras, the Sierra Club’s Beyond Dirty Fuels Gulf Coast organizer, lives in Houston. He is riding out the storm and monitoring industrial sites as best he can. He has no doubt communities in the Houston area will experience similar hardships as people like Rainey. Before joining the Sierra Club, Parras worked with underserved communities in the area with t.e.j.a.s. (Texas Environmental Justice Advocacy Services), a community-based activist organization in East Houston that monitors chemical releases and the impacts on fenceline communities. 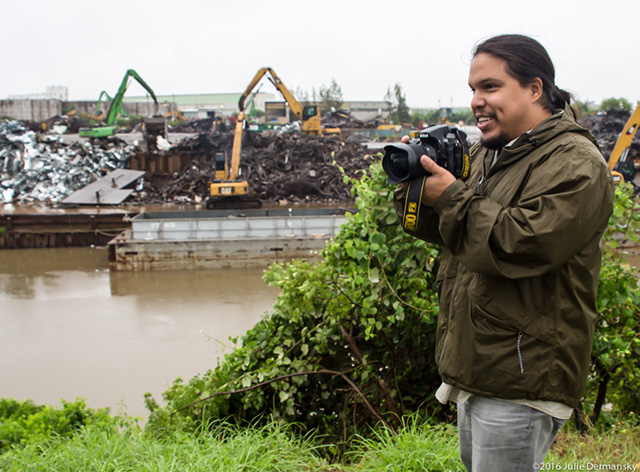 Some of the area’s refineries started shutting down operations leading up to Harvey, including ExxonMobil, Petrobras, Shell, and Chevron Phillips Chemical. This process adds to air pollution because it leads to flaring off excess toxic gases, together with natural gas and oxygen, to keep the chemicals from building up to dangerous pressures.

Before the worst of Harvey’s rain, Parras drove around industrial sites near fenceline communities on Houston’s east side. On August 26, he met with people living next to the Valero Houston Refinery in Manchester who told him the fumes were unbearable. They were trapped, sheltering in place. The air pollution has been affecting Parras too, reaching his home two miles away. “We are being gassed,” he lamented. “Noxious toxic gas is in the atmosphere over a wide area.” 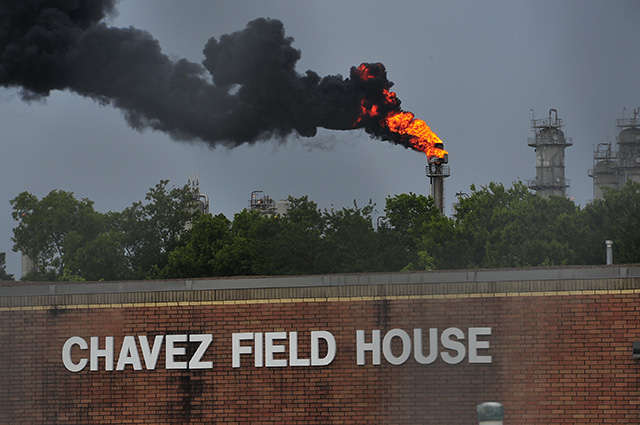 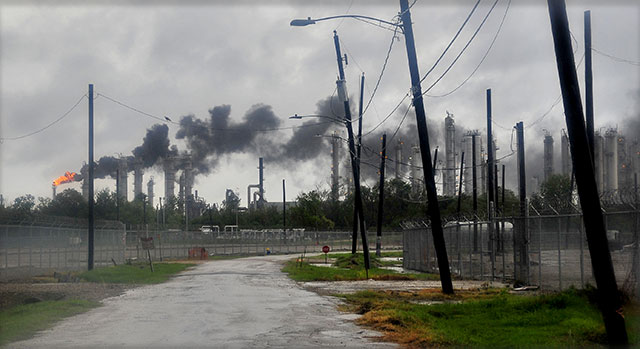 A flare from a TCP Group petrochemical facility, located behind a school in East Houston, as it starts to shut down before Hurricane Harvey. (Photo: Bryan Parras)

The Texas Commission on Environmental Quality also shut down its air quality monitors in the Houston area to avoid water and wind damage related to the storm. This move has left refineries on the honor system, according to the Houston Press.

Furthermore, the Houston Press reports that “the federal Environmental Protection Agency even waived certain Clean Air Act fuel requirements for Texas while refineries work to make up for the inevitable shortages in fuel due to Harvey, so companies are operating with even less oversight than usual.”

The Valero refinery in Manchester isn’t planning to shut down, raising questions about how much air pollution it might release without regulators watching.

It frustrates Parras that climate change is not a concept most politicians in the area are willing to grasp. Acknowledging that the climate is changing is as far as many politicians in oil- and gas-producing regions will go. They typically stop short of accepting mankind’s role, even as their districts feel its effects.

Climate scientist Michael Mann summed up the current storm’s climate change connection: “Harvey was almost certainly more intense than it would have been in the absence of human-caused warming, which means stronger winds, more wind damage and a larger storm surge.” 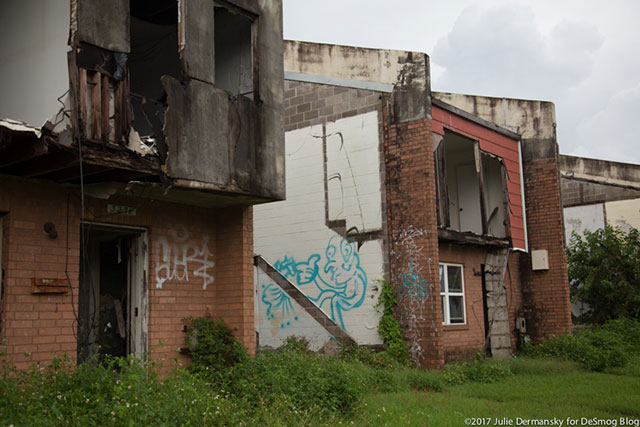 Blighted structures in Press Park, a housing project in the Ninth Ward which was abandoned after Hurricane Katrina hit New Orleans in 2005. (Photo: Julie Dermansky)

Parras hopes that Harvey will be the storm that snaps politicians out of their climate-denial status: “At this point, ignoring facts to the detriment of people’s lives is what makes them culpable.”

Top Texas politicians, including Governor Greg Abbott and U.S. Senators Ted Cruz and John Cornyn, are in the climate-denier camp, along with President Donald Trump. That’s despite 97 percent of climate scientists actively involved in research agreeing that humans are causing climate change. The few scientists who deny climate science are often funded by the oil, gas, and coal industries. The same companies who are paying off climate science-denying scientists also donate to the Political Action Committees (PACs) and politicians pushing disinformation on climate change and stalling action on it.

Senator Cruz urged Trump to keep his promise to pull the U.S. out of the Paris Climate Accord in May this year, and Senator Cornyn praised the president when he withdrew on June 1.

Unfortunately, the federal government’s lack of action on climate change policy will likely get worse. Shortly before Hurricane Harvey hit Texas, President Trump signed an executive order reversing an Obama-era requirement which increased flood standards for public infrastructure projects to protect them from the consequences of climate change.

Because of Harvey, gas prices are expected to spike as production shuts down, and flooding along the heavily industrialized Gulf Coast will inevitably cause damage to oil, gas, and chemical facilities, with spills of hazardous materials to follow.

“America is poised to become a net energy exporter over the next decade. We should not abandon that progress at the cost of weakening our energy renaissance and crippling economic growth,” Senator Cruz wrote in a CNN op-ed on May 29. Did Cruz consider that when extreme weather devastates the Gulf Coast, those industries he is trying to promote are crippled as well?

Like other recent extreme weather events, Harvey’s rains are exposing the peril of ignoring climate science. Policymakers who support Trump’s rollback of climate protections, which arguably were already inadequate, will own a large portion of the blame for the impacts that follow. But, at that point, it could be too late. 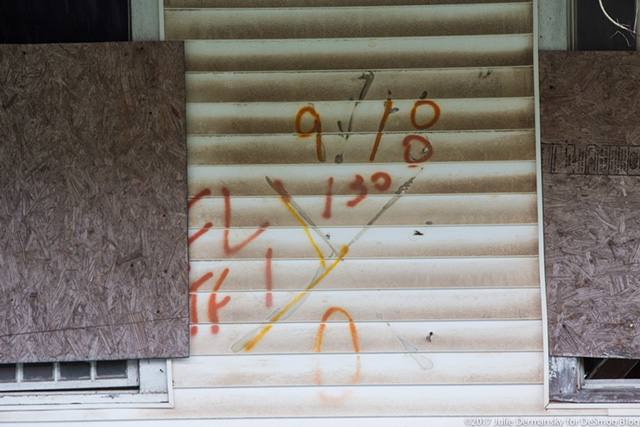