© 2023 Truthout
Turning Over a New Leaf? The Chicago Mayoral Election and the Daley Legacy

Can the candidates escape the long shadow of the current mayor?

Whether you fly, drive or walk into Chicago, you are likely to come across the same sign meeting you at its gates: Welcome to Chicago – Richard M. Daley, Mayor.

The current mayor makes many major appointments in a city that dominates the politics of the state, has virtually individual control over a tax increment financing shadow budget of $1.2 billion and no term limits.

Along with Emanuel, now firmly on the ballot after a dispute about his residency, the other individuals running for Chicago’s most infamous office are: Miguel del Valle, Chicago city clerk and former senator; Carol Moseley Braun, the first African-American female senator; and Gery Chico, board chairman of the Chicago City Colleges.

The mayoral seat has earned a measure of infamy in Chicago. The current mayor, Richard M. Daley, held the seat for nearly 22 years before he announced in September 2010 that he would not be running for re-election. His father, Richard J. Daley, held the mayoral seat from 1955 to 1976. Both father and son have wielded the power of the Democratic “machine,” Chicago-speak for an extensive network of patronage in city government, for 43 years combined.

For the first Daley, this meant using the “machine” to help bring John F. Kennedy a narrow 8,000 vote victory in Illinois in 1960, giving a shoot-to-kill order to city police after rioting erupted in the city’s poorest neighborhood and razing a thriving Italian-American neighborhood to build the University of Illinois Chicago campus with little political backlash. Only in the machine could Daley have been consistently re-elected for 21 years until he suffered a heart attack and died. 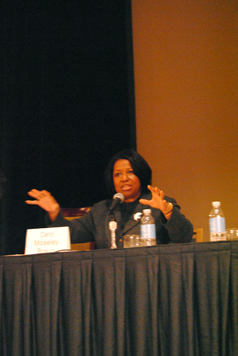 He was immortalized in Pulitzer Prize-winning reporter Mike Royko’s nonfiction account of Daley’s tightly run “machine,” “Boss.” As the Chicago journalistic legend Studs Terkel writes of Daley’s portrayal in “Boss”: “It has not been the ‘astuteness’ or ‘shrewdness’ of Richard J. Daley that has elected him four times. It is the ‘pistol’ in the hand of the precinct captain, who works among the dispossessed. It is the threat direct: loss of job, loss of welfare check, eviction from wretched project flat. The Mayor’s network of informers and spies, concerning party loyalty, is the most powerful in the land … The way of the Machine is the way of Fear.”

Whether the second Daley ruled Chicago any differently is questionable. Forty-seven members of his administration were convicted of corruption by federal officials, he oversaw a secret privatization of the city’s nearly 40,000 parking meters and in 2003 he ordered bulldozers to carve X’s into a city airstrip in the middle of the night when the federal government refused to close it.

The Tie That Binds

Daley’s popularity has been waning – in the last poll, before he announced his retirement, only 37 percent of his constituents approved of his performance – but his decision to leave has cast a tinge of nostalgia over his time as mayor.

An editorial in the Chicago Sun-Times recently described Daley as “one hell of a mayor.”

“Though his dictatorial style at times offended us,” the editorial said, “Chicago flourished during his two decades at the helm.”

Daley can be recognized for building the beautiful Millennium Park in Chicago’s downtown, and unlike many other major mid-Western cities, Chicago has continued to grow in population. On the other hand, he will leave the next mayor a city $654 million in the red, and his blustering personality has led him to make jokes about shooting a reporter to prove that his gun ban works.

In a BBC episode of “Extremes,” focusing on extreme corruption in Chicago, Steve Edwards, host of Chicago Public Radio’s “848” newsmagazine noted that Chicagoans “like our crooks, our fast Eddies and we find them entertaining.”

For the new mayor, walking the line between appearing capable to deal with a major city budget crisis, grabbing the attention of Chicagoans who are used to extreme mayoral antics and distancing oneself from a history of extreme corruption will be difficult to balance. 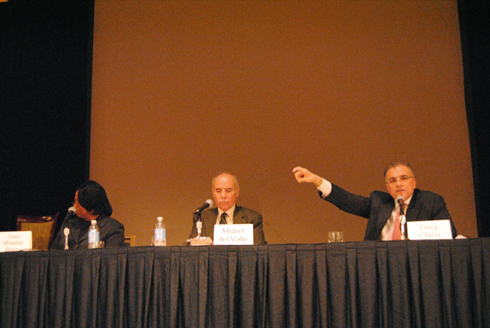 Gery Chico is widely regarded as Mayor Daley’s favorite in the race; Daley recently attested that Chico is “closer to me than anyone else.” A lawyer who served as Daley’s chief of staff from 1992 to 1995, Chico has received all his major appointments from Daley, including president of the Chicago Public Schools Board, president of the Chicago Park District and chairman of the board of trustees of the City Colleges of Chicago. His law firm has also represented dozens of companies that do business with the city.

He has been tied to some of Daley’s biggest public relations fiascos, such as Daley’s parking meter privatization deal. Chico has gotten flack for not criticizing the decision, though a spokesperson for his campaign told Truthout that Chico did not comment on the deal at the time because “he wasn’t in a position to tell the city council or anyone else what to do.”

Chico has also been forced to return a number of questionable donations since he began his campaign, including those from a former Daley cabinet member, who was a prominent figure in the patronage hiring scandal at City Hall and a business partner of the convicted political fundraised Antoin “Tony” Rezko.

Emanuel also has deep connections to Daley. He was a major fundraiser for the mayor when he first won the office in 1989, and in 2002, Daley endorsed Emanuel to fill the Congressional seat emptied by Rod Blagojevich when he ran for governor. 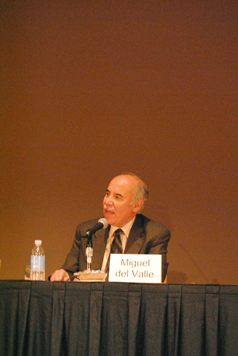 Blagojevich later became infamous for his attempts to sell Obama’s Senate seat to the highest bidder after Obama was elected president.

Even the furor over Emanuel’s residency was steeped in political ties. One of the Illinois’ Supreme Court’s seven justices, Anna M. Burke, is the wife of alderman Ed Burke, a strong political mentor to Chico, the election-law specialist for Emanuel had previously offered free legal advice to another of the chief justices deciding the case and a different judge who ruled in Emanuel’s favor got his spot on the bench with the help of an Emanuel supporter.

In fact, Emanuel’s vacated position in the White House has been filled by a Daley – Bill, the current mayor’s brother and a former member of J.P. Morgan Chase & Co.’s executive committee.

Moseley Braun, the only woman and African-American running, represented Illinois in the US Senate from 1993 to 1999 before she lost her seat to a Republican candidate after one term. Following that defeat, Braun served as ambassador to New Zealand and ran for president in 2004. She has been pegged as the “consensus African American” candidate by a group of black civic and religious leaders and will enter the campaign with deep personal debt from her presidential run.

Though the majority of her career was spent outside Chicago, she has hired Victor Reyes, Daley’s former patronage chief, to serve as her senior adviser. Reyes comes with some political baggage – he was investigated but never indicted in a federal corruption probe for his role with the Hispanic Democratic Organization, a political action committee used primarily to get out the vote for Daley.

Miguel del Valle, lagging in the polls and in funding, has emerged as the primary progressive candidate. He was the Democratic Party State Central Committeeman from 1994 through 1998, Illinois state senator from 1987 through 2006 and is now the city’s first Hispanic city clerk. 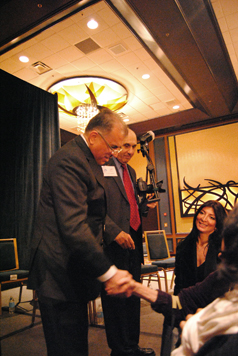 Del Valle’s resume has significant city appointment; he endorsed Daley for re-election in 2006 and was chosen by Daley for his current position of city clerk. The previous holder of the post, Jim Laski, is currently in federal prison on corruption charges.

Like his opponents, Del Valle has taken heat for his lack of opposition to some of Daley’s more controversial privatization schemes, including the parking meter lease deal and the leasing of a major bridge to an international consortium for 99 years.

“I may have opposed some of these proposals, like the parking meter deal,” del Valle told the Chicago Reader. “But as clerk it was not my job to take positions on these issues.”

However, his rejection of campaign funds from anyone doing business with the city and his relative distance from Daley has allowed him to run as the anti-Daley candidate.

A thorn in the side of the Daley administration and long-time Chicago journalist, Ben Javorsky, says, “with the exception of a few political oddballs and misfits, almost everyone around here is part of Daley’s team.” 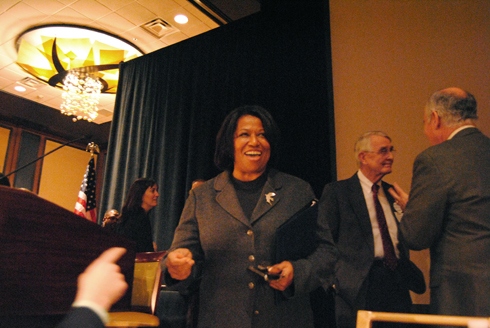 “They really have no choice. For better or worse, in Chicago Daley controls the schools, parks and police, not to mention hundreds of pay rollers and billions of property-tax dollars. “If you want a zoning change, building permit or a business license, you have to go to Daley or at least to people he has appointed or hired. The attitude in Chicago is you can’t beat him – so you might as well succumb.” writes Javorsky. “For the most part, Mayor Daley’s rather benevolent about his power. At least, he believes in being inclusive. Blacks, whites, Asians, Hispanics, gays, even country-club Republicans – they’re all welcome to kiss his ring. His only requirement is abject obedience.”

For the four mayoral candidates, Daley and the “machine” are a hard legacy to follow, but an even tougher one to break away from. 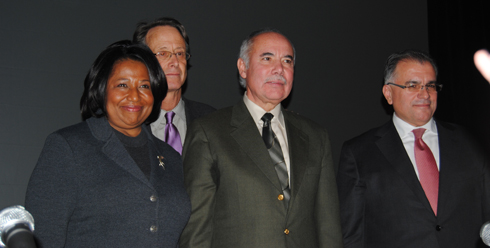 Truthout
Share
Can the candidates escape the long shadow of the current mayor? Whether you fly
Environment & Health