Right-wing media have repeatedly distorted the Obama administration’s record on border enforcement to claim that the border is not secure and that, in fact, the government has failed “to secure the states against invasion,” as Fox News contributor Michelle Malkin has put it.

On Fox News’ Hannity, Malkin claimed that “this current administration has done everything in its power to sabotage immigration law,” and asked: “Why would you trust them one iota with the job that they will not do – that they refuse to do?” Host Sean Hannity added: “I want that border secure and I think we’ve got to get it done for our national security.”

As the House prepares to debate the issue following the Senate passage of a bipartisan immigration reform bill that includes enhanced border measures, conservative media figures have used border security as a sticking point against which to derail reform.

But here are the facts on border enforcement.

Deportations Are At Historic Highs

The Obama administration has deported a record number of undocumented immigrants, which has angered immigrants rights’ activists who argue that the rise in deportations has impacted families of those deported. 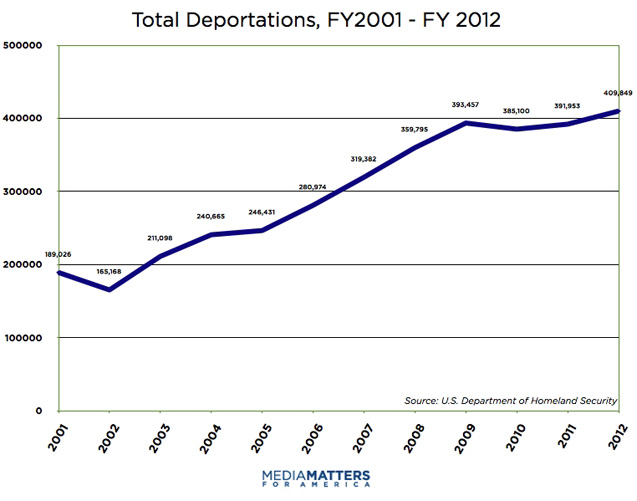 In the past four years, U.S. Immigration and Customs Enforcement has deported a record number of immigrants the government classifies as “priority removals,” which includes those who have been convicted of crimes or are a threat to public safety.

In fact, 55 percent of those deported were classified as “convicted criminals,” an increase of nearly 20 percent from 2009.

Apprehensions Are At An All-Time Low

In FY 2012, the Border Patrol apprehended 364,768 individuals nationwide, 98 percent of whom were caught on the Southwestern border. 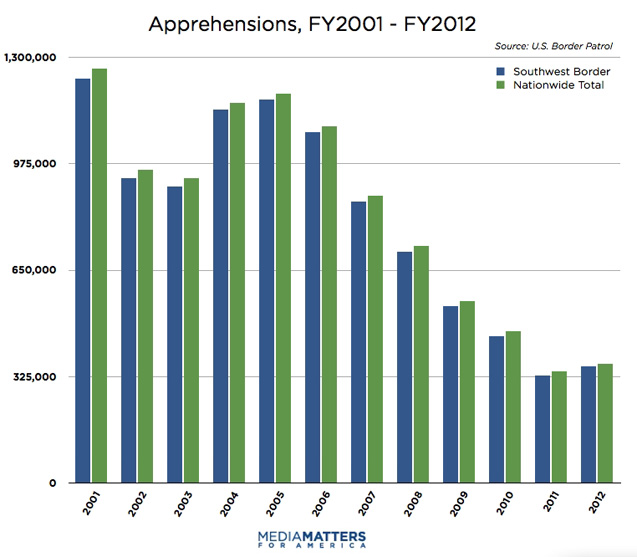 According to the Arizona Daily Star, as of April 2, “192,298 people have been detained this fiscal year, compared with 170,223 during the same period last year, unofficial data shows.” The Star added: “Apprehensions in the Tucson Sector – the busiest section of the border — are down 1 percent so far this year to 64,514. But the Rio Grande Valley in Texas, arrests are up 53 percent to 59,147.” The Star went on to report that “the recent growth in apprehensions is due to more Central Americans attempting to cross.”

There Are Record Numbers of U.S. Border Patrol Agents 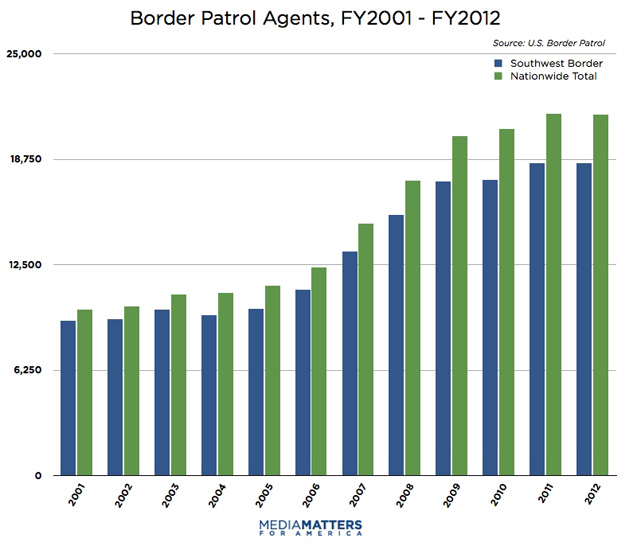 The Border Patrol Tuscon sector in Arizona boasts the most agents at 4,176, which is more than double the number of agents in 2003. More than half of the agents on the Southwestern border are located in the following sectors:

The Rio Grande Valley has added more Border Patrol agents in the last fiscal year than any other sector nationwide.

There Are Record Numbers of ICE Agents

According to U.S. Immigration and Customs Enforcement data provided to the Immigration Policy Center*, there is a record number of ICE agents in the field tasked with enforcement and removal operations.

As of FY 2012, there are about 6,338 agents in the Enforcement and Removal Operations (ERO) division, which is double the number the program had in 2003 at 2,710, according to the organization’s estimates. 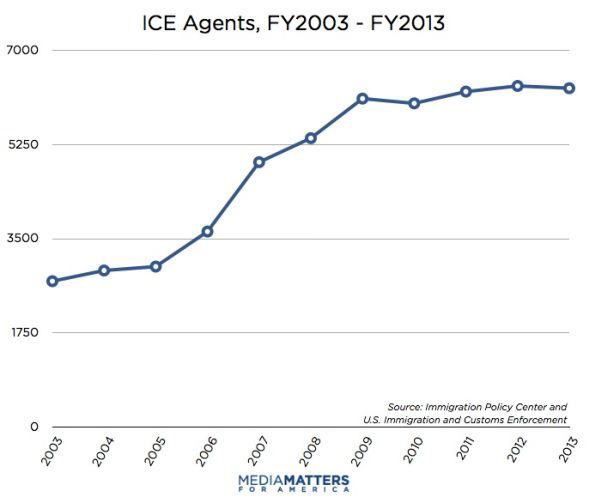 Spending On Border Enforcement Has Doubled

The total budgets for CBP and ICE have doubled in the decade since the inception of the Homeland Security Department in 2002, with CBP’s budget totaling about $11.7 million in FY 2012. 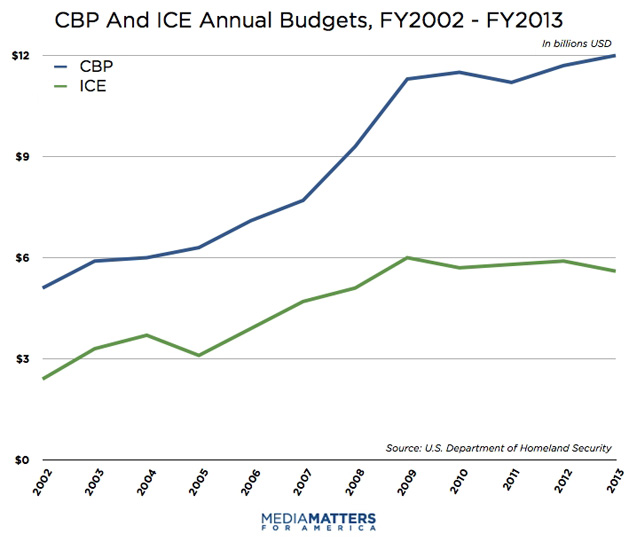 CBP’s budget eclipses that of the U.S. Coast Guard and the Transportation Security Administration, which comprise 17 percent and 13 percent of DHS’ total spending respectively. By contrast, the U.S. Secret Service, the agency tasked with protecting the president and vice president, is a mere 3 percent. 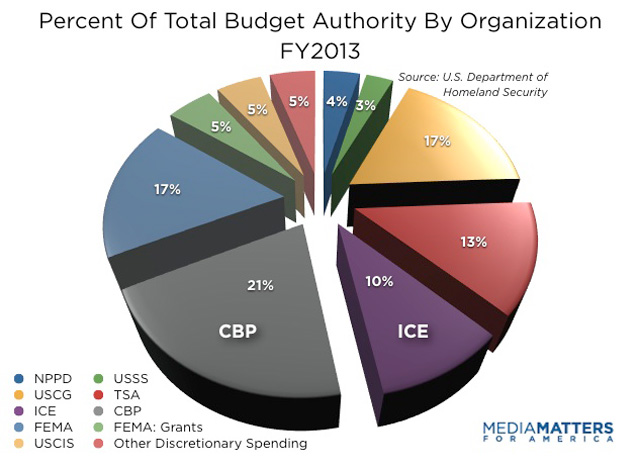 The U.S. border with Mexico stretches 1,954 miles from California to Texas, according to the U.S. International Boundary and Water Commission. As the U.S. Government Accountability Office has noted, however, the “length of the land border is 675 miles, while the length of the border along the Colorado River and Rio Grande is 1,279 miles.”

On October 26, 2006, President George W. Bush signed into law the Secure Fence Act, which authorized $1.2 billion for the building of 700 miles of fencing along the Southwestern border. Before 2006, according to GAO, there were about 120 miles of fencing on the U.S.-Mexico border.

That number has grown to 651 miles of fencing, according to U.S. Customs and Border Protection:

As this Washington Post graphic makes clear, the bulk of the fencing on the U.S.-Mexico border is situated on land, with California, Arizona, and New Mexico almost completely fenced off. As the Post further notes, the “Rio Grande creates a natural partition” along the remaining border miles in Texas:

The comprehensive immigration reform bill that passed the Senate on June 27 includes a drastic increase in border enforcement measures, which has led even conservative think tank the Competitive Enterprise Institute to claim it ushers in “military-style mobilization” on the U.S.-Mexico border. CEI wrote on June 26 that the bill’s border provision “is not simple ‘border security’ — personnel-wise, it’s a mobilization proportional to the one in Afghanistan.”

Discussing the border provisions — which were added in an amendment authored by Sens. Bob Corker (R-TN) and John Hoeven (R-ND) — on CNN on June 25, Sen. John McCain (R-AZ) said the bill would turn the Southwestern border into the “the most militarized border since the fall of the Berlin Wall”:

McCAIN: I think that, first of all, the legislation concerning beefed up border security removes any validity to the argument that border security is not sufficient. I mean, this is not only sufficient, it is well over sufficient. We’ll be the most militarized border since the fall of the Berlin Wall so that’s why I think this amendment was very important.

In addition to fortifying the border in each sector between ports of entry, the amendment provides for the following:

The bill allocates $30 billion in additional funding for “no fewer than 38,405 trained full-time active duty U.S. Border Patrol agents” to be “deployed, stationed, and maintained along the Southern Border” over the next decade. 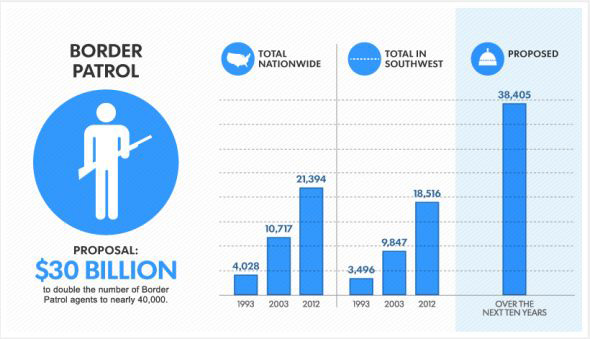 As Bill Maher noted, the addition of that many agents “is going to make the Border Patrol bigger than the FBI — you could put one agent every 250 feet.”

The Senate bill calls for no less than 700 miles of total fencing along the U.S.-Mexico border: 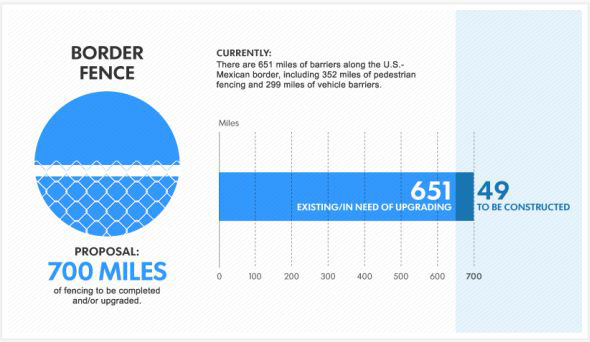 The Senate bill allocates $3.2 billion for additional air and marine support across the Southwestern border, including: 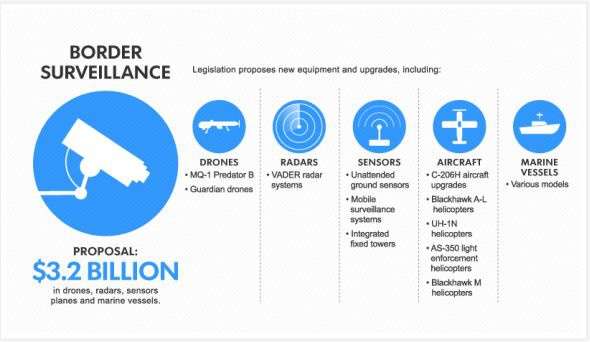 Reminder: Border States Account For More Than Half Of Total U.S. Trade With Mexico

Mexican officials have reportedly criticized the enhanced border measures in the Senate bill. The Washington Post reported on June 27:

“Fences are not a solution to the migration phenomenon, and they are not congruent with a safe and modern border,” Meade said. “They don’t contribute to the development of a competitive region that both countries are trying to build.”

Additionally, The Hill reported on July 2 that Rep. Filemon Vela, a Democrat who represents the southernmost tip of Texas, quit the Congressional Hispanic Caucus in protest over the border provisions in the Senate bill. According to the article, Vela stated in a speech on the House floor:

“Erecting more border fence would chill the robust economic relationship that our country and our states enjoy with that country. … Rather than constructing new hurdles to trade with Mexico, we should be tearing down trade barriers in order to promote and strengthen our relationship with our neighbor country.”

Indeed, what is often lost in the debate over border enforcement is the fact that Mexico is the United States’ third-largest trading partner behind Canada and China. Mexico accounted for about 13 percent of total U.S. trade in 2012, totaling about $494 billion. That was up from $461 billion in 2011. 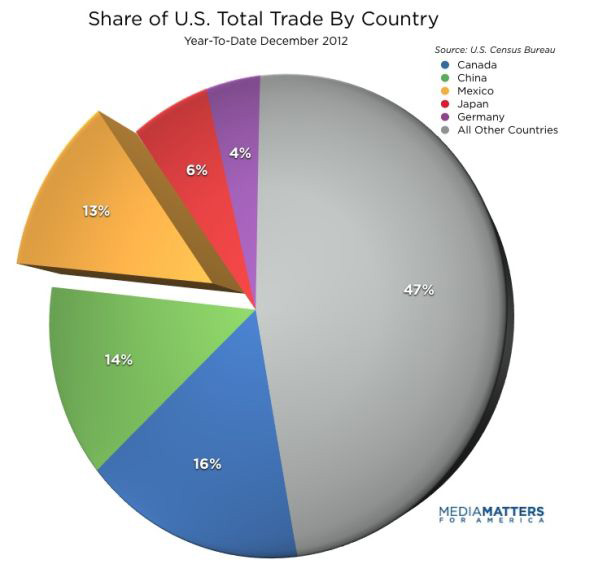 Texas is by far Mexico’s largest state trading partner with $194.4 billion in 2012, which accounts for nearly 40 percent of total trade. 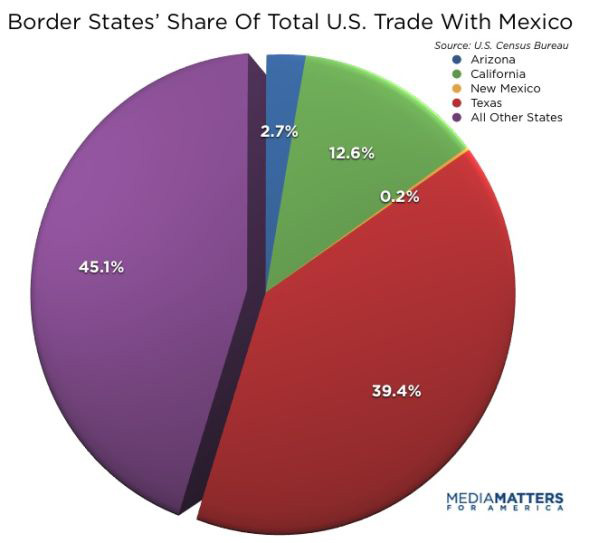 Arizona and Texas count Mexico as their largest import and export partner, with the exception of California and New Mexico. California’s top importers are China and Japan, while New Mexico’s top exporter is Israel and importer is China.

Solange Uwimana is an editor and senior researcher at Media Matters. She graduated with a bachelor’s degree in journalism from the University of Colorado.