By
William A Collins &
Emily Schwartz Greco,
Other Words

Do you remember Cory Remsburg? He’s the Army Ranger who received a standing ovation from Congress during President Barack Obama’s State of the Union address a few weeks ago.

Applause is nice, especially from such influential people. It sure beats those cuts the Pentagon wants to make to veteran benefits.

Defense Secretary Chuck Hagel is now trying to sell vets on his plan to scale back the number of U.S. troops, as well as what taxpayers are spending on active-duty and retired forces. After he announced his ideas, Hagel brought them straight to a town hall meeting with soldiers at Fort Eustis in Virginia. “There was no applause,” Military.com reported. 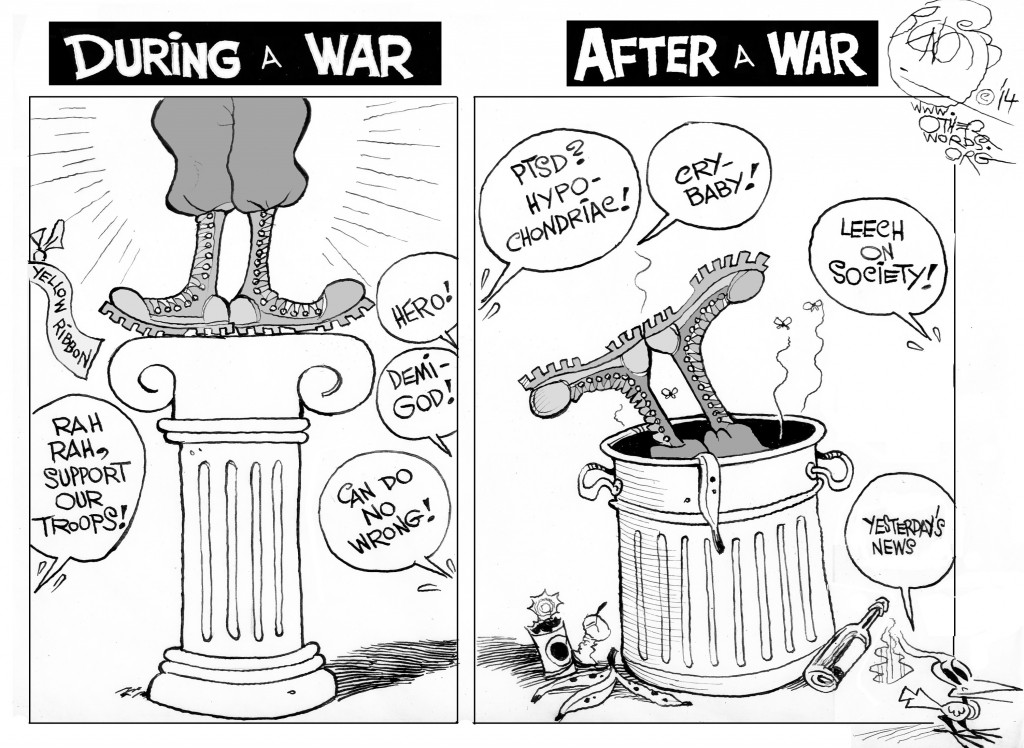 Before and After a War, an OtherWords cartoon by Khalil Bendib

Whenever Washington winds down its wars and our troops become needy veterans, interest in their welfare always flags. Senate Republicans just blocked a comprehensive $21 billion bill that would have beefed up veteran education, health, and other benefits.

But that’s not all. Food stamps were just cut for some 170,000 vets, pensions will soon decline, and the Department of Veterans Affairs admits a backlog of 393,000 benefit claims after making great progress toward getting caught up.

About 30 percent of the vets who serve in war zones return from the battlefield with undiagnosed or untreated post-traumatic stress disorder. Some half a million are suffering from it now.

Clearly, Congress and the White House are much better at starting wars than cleaning up after them.

Military debates in Washington generally revolve around the costs of manpower, equipment, and logistics. Finding the money needed to cover the medical bills and pensions of veterans is always harder to squeeze into the federal budget.

The Pentagon only lists 19,000 troops officially wounded by enemy action in Afghanistan and gives them good care. The other hundreds of thousands with mysterious brain or emotional injuries have to prove it. But first they need to succeed in gaining an appointment at the Department of Veterans Affairs — better known as simply the VA — and demonstrating that they were honorably discharged.

That can be tough.

William Dolphin, a Purple Heart Vietnam veteran, is now fighting for that right in federal court. The Army gave him a bad conduct discharge years ago for being AWOL upon confusion over where he was supposed to convalesce after leaving the hospital. He’s been suffering from PTSD for four decades.

“All I’m asking is that the Army recognize that I served my country proudly,” Dolphin says.

There’s another new lawsuit filed in March by a group of Vietnam vets who went through a similar ordeal. It’s seeking class-action status.

And things haven’t changed much since the Vietnam War. Washington still sees wasting record sums of money on the F-35 Joint Strike Fighter as a high priority while vast numbers injured veterans go without adequate psychiatric care. At least 55,000 veterans remain homeless despite the existence of dozens of programs that specifically target this problem.

If our leaders really want to honor Cory Remsburg, they should stop making people go through what he experienced. It’s time to stop waging unnecessary wars and start taking better care of our wounded warriors. The battle for the British-controlled Falkland Islands off the coast of Argentina continues to kill, even 30 years after Argentine troops landed there on April 2, 1982. The…

Congress and the VA have let politics and red tape interfere with two important veterans assistance programs for jobs and mental health.